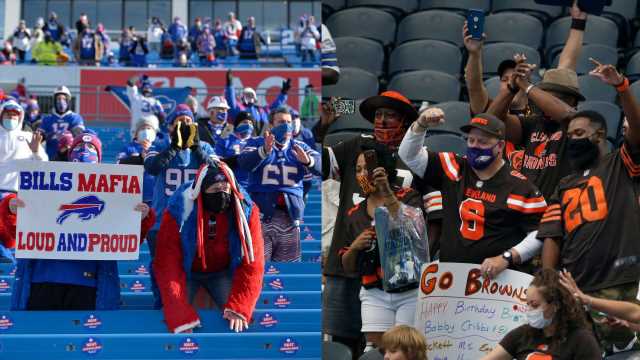 I’ve written this piece before, sorting through whether fans of the Patriots, Niners, Seahawks or Eagles were most deserving of a Lombardi.

Personal leanings were never a factor then, as my Browns were typically coming off a grisly car wreck of a campaign. This time around, Cleveland is fully alive after Sunday’s stunner over the Steelers.

So, do I steer clear of the Browns, making a compelling case for why the Ravens merit a third Super Bowl title since Y2K? Would that make me more journalistically pure? More emotionally droid-like?

I don’t think so. I believe we can proceed with an eyes-open review of the fan bases attached to the eight remaining NFL playoff teams to answer the drenched-in-data question heading into the Divisional Round: Which one most deserves a Super Bowl title?

Seven fan groups will despise my answer. Hordes of others have already clicked out of this article. Life is a highway!

(SUPER IMPORTANT NOTE: You’ll notice below we list Super Bowl appearances and wins. I’ve also devised a GOOD-STORY METER, applying a value of 1-100 to answer the question: How much fun would this be for football?)

I did not publish this list a year ago, but if I had, Chiefs fans would have topped it — they richly deserved their eventual reward. Kansas City is easy on the eyes and armed with a superhuman under center in Patrick Mahomes. Andy Reid is the masterful coach who waited 21 years to win it all. After decades of teasing and torment, Chiefs fans now stare at a dynasty in formation. Kansas City is a favorite to repeat, but last year’s glory pushes this group to the back of the bus.

Ravens fanatics have now enjoyed 13 playoff appearances and two Super Bowl titles since 2000. This crowd expects to win on Sundays, but back-to-back playoff implosions still sting. Pressure surrounds Lamar Jackson, a member of the quarterbacking New Wave who understands that henpecking nonbelievers will come calling if he stumbles again, even after he notched his first career playoff win on Sunday. Ravens fans carry that same weight, making these next few weeks a historical turning point for everyone involved.

Their lone Super Bowl win after the 2002 season rests deep in the past. Bucs fans have tolerated an excess of messy football and losing campaigns inside an NFC South ruled for years by the Saints, Falcons and Panthers. Tom Brady has changed all that, but therein lies my reservation: Tampa’s quest feels 95 percent focused on a 43-year-old starter looking to stick it to Bill Belichick and the Patriots. It’s great television, but I don’t sense *BUCS-FAN ANGST* as the driving force here. Do you?

Rams fandom is complex. You’ve got a mix of old-school supporters in Los Angeles, a heartbroken subgroup in St. Louis and whoever the team attracted since returning west in 2016. Did forgotten followers in Southern California feel buy-in when Kurt Warner and friends won Super Bowl XXXIV? What percentage of St. Louis-based faithful wept when the jettisoned Rams fell to New England in Super Bowl LIII? The Ramily is splintered, but a championship would serve as a balm.

Packers fans have known luxury for decades, lost in a high romance with Brett Favre for 16 years before switching dance partners to Aaron Rodgers for the past 13. Disquiet lingers, though, with Green Bay authoring one playoff catastrophe after the next since winning Super Bowl XLV way back after the 2010 season. The overtime loss to Seattle in the 2014 NFC title game ranks among the decade’s most gruesome implosions. How about the 15-1 juggernaut that fell to pieces against the Giants in the 2011 Divisional Round? Cheeseheads have witnessed ample horror during a Rodgers reign that should have netted four trophies by now.

Not unlike Green Bay, New Orleans has teased fans with spicy regular seasons that give way to new worlds of heartbreak. Drew Brees helped win it all after the 2009 season, but the franchise has battled dark energies since. Consider how the past three campaigns went down:

2018: The NFL rulebook was altered to account for what happened in a controversy-doused 26-23 overtime loss to the Rams in the NFC title game.

2017: New Orleans submits to the Vikings in a divisional-round tilt known to humans as THE MINNEAPOLIS MIRACLE.

With the 41-year-old Brees pondering retirement and the front office preparing for an offseason voyage into Salary Cap Hades, it’s last call for one of the league’s most passionate fan groups.

Bills fans are special. If the league was founded today, small-market Buffalo would be ignored as a landing spot. The team wouldn’t exist. Nor would its followers. We’d have no inkling of their fiery passion, endless loyalty and desire to drunkenly smash tables into oblivion.

Buffalo loyalists know joy and pain, reaching four consecutive Super Bowls in the 1990s and losing them all. Today’s Bills emit positive vibes, though, led by a quarterback in Josh Allen who perfectly fits in Western New York. Like Buffalo, Allen has been doubted at every phase. Like Buffalo, he was built to overcome. The one-of-a-kind Bills share plenty of DNA with the …

Every other team on this list has reached the Super Bowl. No other team endured The Drive. Or The Fumble. No other team had Bill Belichick as head coach and Ozzie Newsome in the front office — with plans to draft Jonathan Ogden and Ray Lewis — only to have ownership suddenly relocate the operation to Baltimore and rebrand said franchise around an Edgar Allan Poe thinkpiece.

After waiting three years for an expansion franchise, Browns fans in 1999 were gifted instead with 20-plus years of inglorious failures, dysfunction and unimaginable embarrassment. Before Sunday, the league’s longest playoff drought belonged to Cleveland. The fans are three years removed from an 0-16 season that followed a 1-15 night terror.

That’s the bad news. A snapshot of pain that curls back generations.

The sunnier side is what these Browns represent: A glimmer of hope in a rugged time. A drumbeat inside the heart telling you ANYTHING IS POSSIBLE.

Each of these teams above would bring happiness with a Super Bowl win. But the Browns? That’s mere notches below ripping the lid off the Ark of the Covenant.

Do you dare look inside?