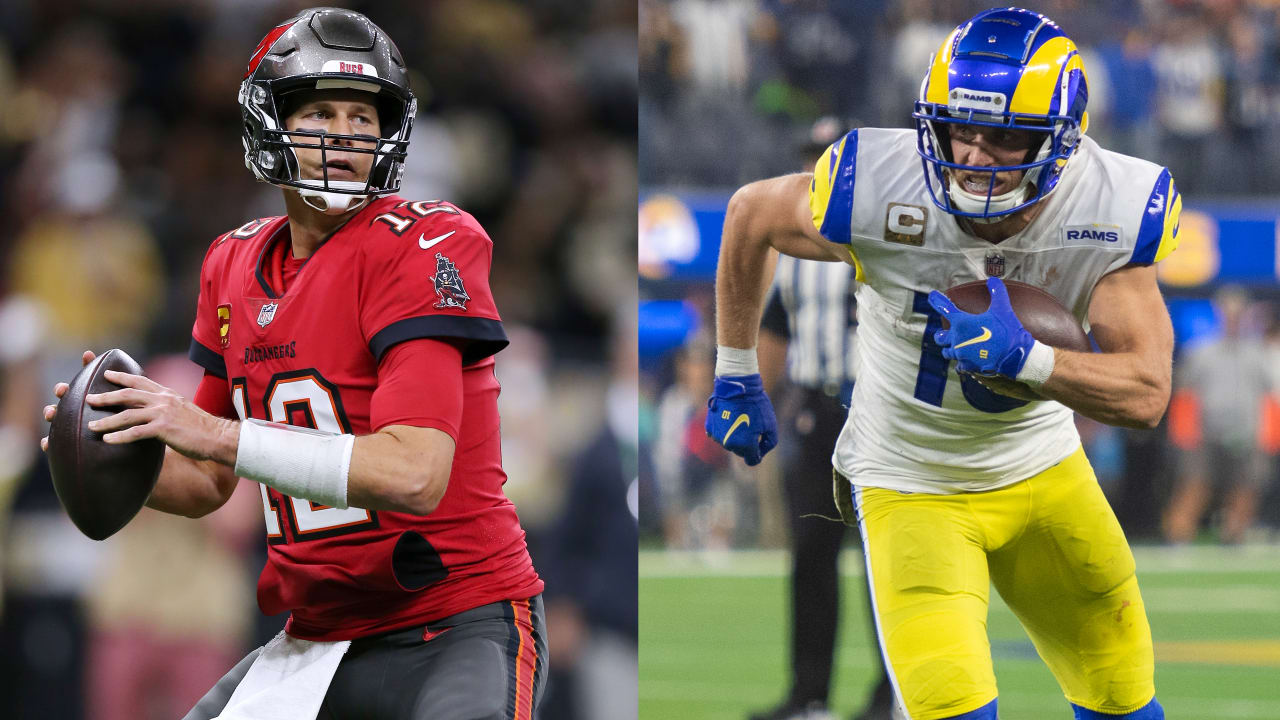 Each week in the 2021 campaign, former No. 1 overall pick and NFL Network analyst David Carr will take a look at all offensive players and rank his top 15. Rankings are based solely on this season’s efforts. The Week 10 pecking order is below.

The players that were ahead of Brady on this list heading into Week 9 either didn’t play or took a step back. So, as we reassess the big picture here at midseason, the Bucs’ QB1 claims the top spot coming off his bye week. He leads the league in pass TDs (25) and is on pace to throw for 5,631 yards this season, which would break Peyton Manning’s single-season record of 5,477 in 2013. Brady is set up to stay hot in the second half of the season with the Bucs’ next four opponents (Washington, Giants, Colts and Falcons) having a combined record of 13-21.

Rodgers didn’t make the trip to Kansas City after testing positive for COVID-19, and the Packers couldn’t get a win without No. 12 on the field. Since 2008, the Packers are 6-12-1 without Rodgers in the lineup. The earliest Rodgers can rejoin the team is Nov. 13 — the day before the Week 10 game against the Seahawks. Everyone in Green Bay is crossing their fingers that he returns.

Murray sat out Sunday’s contest with a sprained ankle (suffered late in Week 8 vs. Green Bay), making it the first game he’s missed in his NFL career. His status for Week 10 is still up in the air, and honestly, it’s best to let the injury fully heal to ensure he’s at his best down the road.

There’s no sugarcoating this one. Losing to the Jaguars was a terrible misstep for a team with Super Bowl aspirations. The entire offense played poorly, with Allen failing to account for a touchdown (pass or rush) for the first time since Week 7 of last season. He had a season-low passer rating (62.7) and a season-high three giveaways (two picks, one fumble). To make matters worse, the Patriots (5-4) have won four of their last five games and sit right behind the Bills (5-3) in the division race right now. Rough day all around for Buffalo.

Lamar wasn’t perfect with three pass TDs and two picks vs. Minnesota, but he put his team on his back and found a way to get the job done, lifting the Ravens to 6-2. The thing that stood out the most is he led all players in this game with 21 carries and 120 rush yards, marking his 10th career game with 100-plus rush yards, which ties Michael Vick for the most such games by a QB since 1950 (no other QB has more than four). The Ravens are 10-0 in games where Jackson rushes for at least 100 yards.

There has been so much focus on quarterback play this season that Kupp has consistently flown under the radar. On Sunday, he became the second player in the Super Bowl era to post 1,000 receiving yards and 10 receiving TDs in his team’s first nine games of a season, joining Hall of Famer Jerry Rice (1990).

The Raiders have experienced an incredibly tough month, but they had been able to weather the storm until Sunday, when they suffered their first loss under interim head coach Rich Bisaccia. That will happen when the quarterback doesn’t take care of the ball. Derek had three costly turnovers, including a fumble on a strip sack with 37 seconds remaining in the game, which sealed the win for the Giants. The Raiders’ ability to limit turnovers has been a key to their success this season. They had just five giveaways (tied for second-fewest in the league) entering Week 9. They must get back to playing clean football.

The euphoria of the Cooper Rush-led victory in Week 8 was short-lived. With Prescott back under center, the Cowboys had their worst all-around performance of the season against the Broncos at home, losing by 14 points, and they didn’t score until there was 4:08 remaining in the game. It was very uncharacteristic for this star-studded offense, which failed to convert on all four of its fourth-down attempts. Prescott put up his lowest passer rating (73.9) of the season.

Chase has been humbled over the last two weeks, posting just 32 receiving yards against the Browns in Week 9 and 49 vs. the Jets in Week 8 (his two lowest totals of the season). The Offensive Rookie of the Year front-runner needs to return to being the impact player he was in the first seven games of the year.

Adams and Jordan Love were out of sync for much of the day against Kansas City, but I don’t place the blame for that on Adams. The young passer often just missed the wideout in his first career start. It was the first time in Adams’ career where he was held to less than 50 receiving yards when being targeted at least 14 times. He finished with a season-low 42 yards on six catches. He better hope Aaron Rodgers is back next week or he could have the same troubles vs. Seattle.

Since returning from injury, Chubb has looked pretty spectacular. In the Battle for Ohio, he had a whopping 137 yards and two touchdowns, including a 70-yard run, on 14 carries. Chubb is averaging 103 rush yards per game and would become the second player in franchise history (joining Jim Brown) to average 100-plus rush yards per game in a season if he can keep this pace. Unfortunately, Chubb has tested positive for COVID-19 and his status for Week 10 is uncertain, per my colleague Tom Pelissero.

Evans has a team-high eight receiving touchdowns and is on pace to notch his eighth consecutive 1,000-yard season. The fact that he’s been able to go for over 1,000 yards in every season of his career thus far is pretty incredible.

I wrote a few weeks ago that Ryan is underrated, and it’s still true. Against a Saints defense that ranked fourth in scoring coming into the contest, Ryan completed 76.7 percent of his passes for 343 yards, two TDs and a 135.8 passer rating, and he RAN for a TD! It didn’t matter whether New Orleans blitzed or not. Ryan excelled in both scenarios.

Sitting at 4-4, Ryan has the Falcons holding the final wild-card spot in the NFC playoff picture with a date with Dallas next on the calendar.

Prior to Sunday’s loss to Tennessee, Stafford had been on a hot streak. He cooled off quickly against Mike Vrabel’s defense and had his worst game of the season in several categories: pass yards per attempt (6.1), pass TDs (one), INTs (two), sacks (five) and passer rating (71.0). The Rams have one of the most explosive offenses in the league but were held to just 16 points. They must do a better job of moving the ball against playoff-caliber teams.

Hopkins was inactive against the 49ers with a hamstring injury, but he stays in the top 15 because of his overall performance in the first half of the season. The Cardinals fared well without him against San Francisco, but his value will be apparent when he returns.