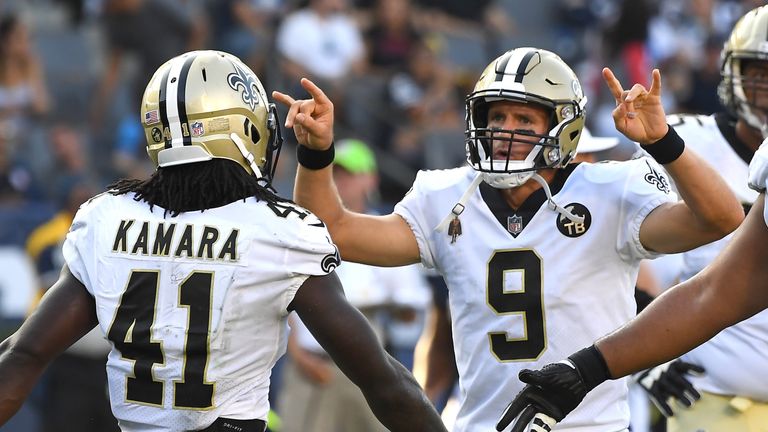 The NFL’s all-time leading passer, arguably the best dual-threat running back in the league, and the NFL’s undisputed No 1 receiver; with such an array of weapons, is it time to consider the New Orleans Saints Super Bowl favourites?

With victory, the Saints (7-1) stretched their win streak to seven straight, leaving them second only to the Rams (8-1) atop the NFC and Kansas City Chiefs (8-1) in the AFC. Sure, Chiefs quarterback Patrick Mahomes has lit up the league this year (2,901 passing yards and 29 TDs, leading the NFL) and Todd Gurley has been a beast for the Rams at running back (1,230 scrimmage yards and 16 TDs, again league highs). Plus there is Minnesota Vikings receiver Adam Thielen’s record-run of 100-yard games to start the season and Antonio Brown of the Pittsburgh Steelers’ league-leading 10 TD receptions.

Brown had formed part of the league’s most devastating trio, the ‘Killers Bs’, when teamed up with Ben Roethlisberger and Le’Veon Bell in Pittsburgh, but with Bell missing for this season – as much as James Conner has admirably stepped in – there is a new dominant three-headed monster in the NFL, and it comes out of New Orleans… With Tom Brady still trucking at 41 years of age, it’s easy to forget that Brees is operating at an extraordinary level for a 39-year-old.

It may not be immediately obvious, as Brees’ 2,336 passing yards is good for only 12th in the NFL – incredibly, behind New York Giants’ Eli Manning in 11th – and he has 11 fewer passing TDs than sophomore superstar Mahomes.

But, Brees doesn’t need to carry this team on his shoulders to the extent that he once used to, when putting up his record five 5,000-yard passing campaigns in 2008, ’11, ’12, ’13 and ’16. He now has the talent around him to operate (somewhat) more conservatively.

That’s notable given Brees’ NFL-best 18:1 touchdown-interception ratio this year, as well as his career-high completion percentage – a staggering 76.3 per cent, a career high. His passer rating of 120.6 so far this season is also a career best. 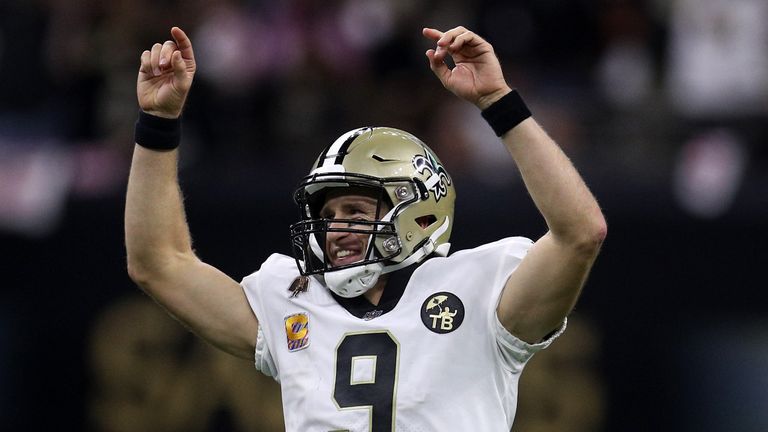 In fact, over the Super Bowl era, only four other qualified quarterbacks have posted a rating of 120 or higher through eight games – Dan Marino 1984, Peyton Manning 2004, Tom Brady ’07 and ’16 and Aaron Rodgers ’11 – and, with the exception of Brady in ’16 (he was suspended for the first four games), on every occasion they claimed the league MVP.

Despite his multiple 5,000-yard seasons, and his solitary Super Bowl triumph in the 2009 season, Brees has yet to be awarded the honour of the league’s leading player. How fitting it would be that changes in the season he became the NFL’s all-time leading passer.

The dual-threat of Kamara 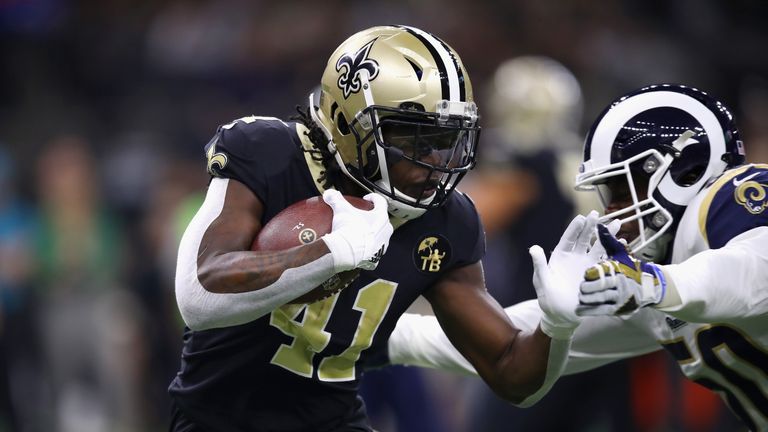 Lessening the burden on Brees has certainly been the arrival of Kamara – 67th overall pick in the 2017 draft – and the dual threat he offers out of the backfield, complementing the more ground-and-pound game of Mark Ingram.

It is widely considered that Gurley has been operating on a different planet to everyone else over the past two years but, since the start of the 2017 season and Kamara’s NFL arrival, he is second only to the Rams running back in scrimmage TDs, notching 25.

He is also a different kind of threat to Gurley, who does the majority of his work between the numbers. Kamara, meanwhile, provides Brees with another option on the outside – he leads all running backs over the last two seasons with 48 such receptions and 524 receiving yards working on the sidelines. 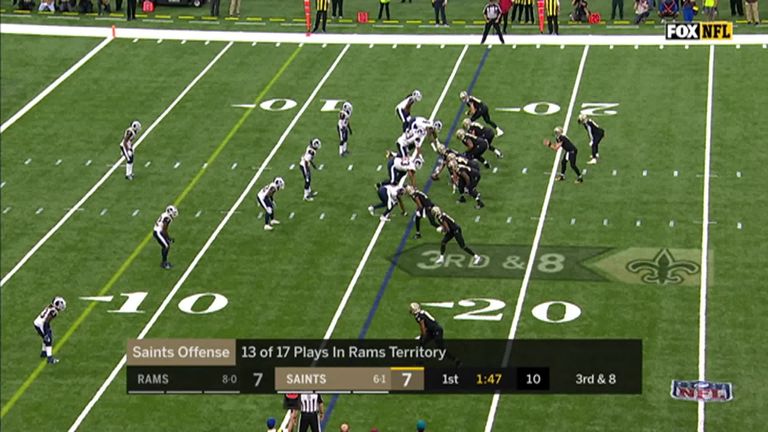 Part of the reason for that is Kamara was required to step up as the Saints’ lead back over the first four games of the season, while Ingram was suspended. Step up is exactly what he did.

Kamara tallied 275 yards on 56 carries over that span, an average of 4.9 a tote, while his 134-yard and three-TD effort in Week Four against the Giants were career highs, and he added two further 100-yard receiving outings to that in Week One against the Tampa Bay Buccaneers and Week Three against the Atlanta Falcons.

The numbers have tailed off slightly since Ingram’s return, though Kamara was at his destructive best once more last Sunday, a key component in the thrilling win over the Rams, outshining Gurley with 116 scrimmage yards to 79 and three scores to one.

Thomas’ claim to be No 1 Crowning Thomas as the NFL’s undisputed No 1 receiver in the opening paragraph of this piece is bold claim, but not one without substance.

Of the most targeted wideouts in the league, no-one comes close to dominating like Thomas does. According to Pro Football Focus, Thomas is the only receiver in the NFL to get more the 50 per cent of his team’s targets, with 57.7 per cent of the share. The closest No 1 guys behind him are DeAndre Hopkins (50%) with the Houston Texans and Odell Beckham Jr (50%) of the Giants.

That figure may decrease somewhat over the coming weeks, what with the addition of free-agent signing Dez Bryant. However, as former NFL defensive coach Rob Ryan suggested on the latest Inside the Huddle podcast, the signing also stands to benefit Thomas, with at least one of the receivers set to face one-on-one coverage as the other attracts attention.

But it’s not just within his own team where Thomas has a rightful claim to being the NFL’s true No 1 receiver. His hands are consistently the most reliable in the league, hauling in the highest catch percentage (88.6) of not only this season, but of any since 2009, while he has the second-most receptions (70) and fourth-most yards (880). 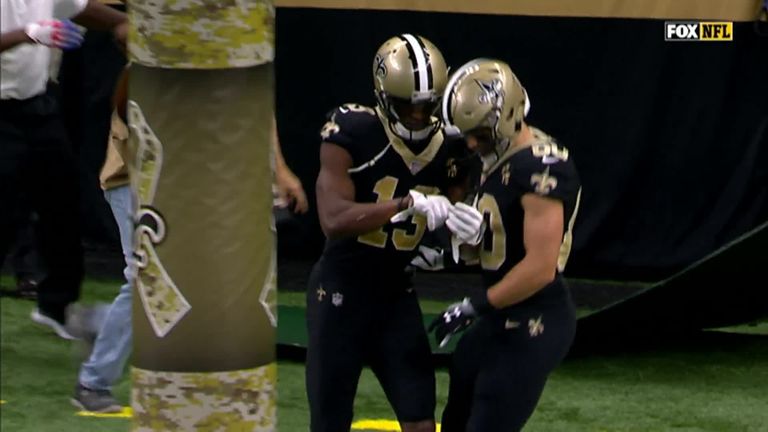 And, much like Kamara, Thomas appears to only be getting better. The 47th overall pick in the 2016 draft is on course to obliterate his rookie (1,137 yards, nine TDs) and sophomore (1,245, five) numbers.

He has five scores already and, of his 880 yards through eight games, 211 of them – his first-ever 200-yard game – came in the stunning win over the Rams last Sunday.

Sterner tests lie ahead for the Saints. A potential Rams rematch in the playoffs being one of them. But, most encouraging for the Who Dat Nation down in New Orleans is that such clutch performances from their biggest stars are being reserved for the games that matter most.

And the Rams win wasn’t just a flash in the pan either. Of the Saints’ seven-match win streak, their last four have come against the Washington Redskins, Baltimore Ravens, Minnesota Vikings and Rams – the Ravens the only team over that stretch that doesn’t currently have a winning record, though they did still boast the NFL’s No 1 defense at the time of meeting. The Cincinnati Bengals lie in wait this Sunday – live on Sky Sports Action from 5pm – before a tricky assignment in the defending Super Bowl champion Philadelphia Eagles and then a Week 12 meeting with the streaking Atlanta Falcons.

Bryant gets a meeting with his former team in Dallas a week later, before the season rounds off with three divisional games in four weeks, including two against their biggest threat in the NFC South, the Carolina Panthers.

It won’t be easy, but with the offensive weapons at their disposal, you would have to be brave to back against the Saints.