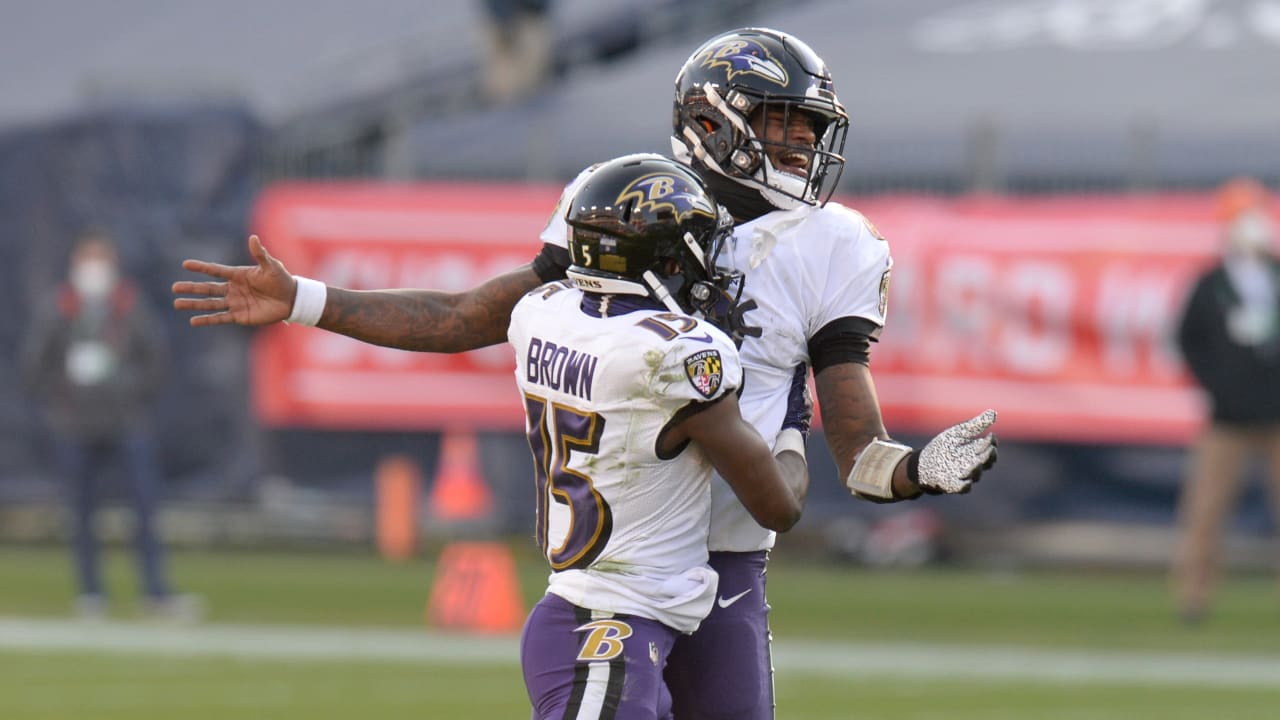 Lamar Jackson tried to contain his smile but struggled. It felt good to erase not only a daunting deficit on Sunday but also a nagging narrative in leading the Baltimore Ravens to a 20-13 victory over the Tennessee Titans in the first round of the playoffs at Nissan Stadium in Nashville.

For a week, if not a full year, the dual-threat quarterback’s accomplishments were minimized by the team’s failure to win a playoff game. In 2019, he led the Ravens to a franchise-record 14 wins and became just the second player to unanimously win an NFL MVP award. He wrote his name in the record books by becoming the first to throw for 3,000 yards and rush for 1,000 in the same season, and players across the league recognized the accomplishment by giving him top billing on the “Top 100 Players of 2020” list.

And yet the talk all offseason was about him being one-and-done in the postseason for the second straight year. That cloud grew in size and foreboding Sunday after the Ravens fell behind 10-0 to the same team that knocked them out of the playoffs the previous season and had beaten them in overtime in Week 11 this season. Even the TV broadcast crew watered the seeds of doubt by pointing out that Baltimore was the only franchise over the last four seasons that failed to win a game after trailing by at least 10 points.

Narratives that were written in pencil were being rewritten in ink, particularly after a poorly thrown pass by Jackson was intercepted and converted into a field goal to make it a two-score game. The former Louisville star might be fast enough to run away from defenders, but not his recent past. Memories of his three-turnover performance in last season’s playoff loss to the Titans came rushing back.

But if there is one thing about Jackson that should never be underestimated, it is his belief in himself. It is a confidence that does not bend or break. It carried him when personnel people said he should change positions after leaving college, despite previously winning the Heisman Trophy as the best player in the country. It hardened him after a loss to the Los Angeles Chargers in the first round of the playoffs two years ago. It drove him after the 28-12 loss to the Titans in the Divisional Round last season. And on Sunday, it calmed him.

“After the turnover, I just locked in even more,” he said after the game.

On consecutive possessions, he led a 12-play march that culminated with a field goal, then an 82-yard drive that ended with him slicing through the Titans’ defense on a 48-yard run that was as much an exclamation point as it was a touchdown. The sprint tied the score late in the second quarter and served notice that these Ravens are different from some in the past. They had so many chances to blink or buckle this season, whether it was three consecutive losses and four defeats in five games midway through the season, or the COVID-19 outbreak that served as a revolving door to their locker room, ushering players in and out.

The ability to overcome those things, as well as an early deficit against an opponent that has had its way against them in recent outings, was at the forefront of coach John Harbaugh’s mind afterward. Typically Harbaugh stiff-arms comparisons about past teams or plays or players, but on Sunday, he stepped outside his comfort zone and called Jackson’s touchdown run the best he’s ever seen by a quarterback, then described the game as his “best win ever.” Mind you, Harbaugh has 140 career victories, 11 of which have come in the playoffs, including one in the Super Bowl.

The Ravens took a lead they would not relinquish to start the second half, going 77 yards in 10 plays. Jackson was at the wheel, completing each of his four pass attempts while rushing for 34 yards on four carries. He gained 23 yards on a third-and-2 rush, then found his fullback for 9 yards on another third-and-2. J.K. Dobbins culminated the march with a 4-yard TD run to make it 17-10.

Tennessee could manage only a field goal on its final six possessions (and three quarters). Normally reliant on running back Derrick Henry, who won his second consecutive rushing title this season and became just the eighth back in NFL history to surpass 2,000 yards rushing in a season, they could not get him going. He finished with just 40 yards on 18 carries, which was the second-lowest postseason output of his career. In his previous two games against the Ravens, he rushed for 195 and 133 yards.

“They had a plan, and they executed their plan,” Henry said. “All the credit goes to those guys, you know, of stopping the run. The last two times we had success and they had a plan to make sure we didn’t have success, and that’s what they did.”

On any other occasion, Baltimore’s defense would be the story. It shut down a Titans squad that had scored at least 30 points in 10 games this season, reaching 40 or more on five occasions. It held Tennessee to a season-low 13 points and just 209 yards and 12 first downs.

But not when the focus all week — if not all season — was on Jackson and whether he could find postseason success. Individually, he had accomplished so much in his first two seasons, but none of that seemed to matter to outsiders or to Jackson as Sunday kicked off.

The Florida native is consumed with one thing: winning a championship. The morning after he was drafted with the final pick of the first round, he flew to Baltimore and met with the media. During one break, while signing commemorative footballs in a back office, he was asked to choose between a spot in the Hall of Fame and a win in a Super Bowl. He chose the Super Bowl, stating that such an accomplishment could only occur if he were doing the things necessary for team success.

“It feels good,” said Jackson, who threw for 179 yards on 17 of 24 completions and rushed 16 times for 136 yards. “I knew we had the capability of doing that, but it’s always going to be naysayers no matter what.”

Harbaugh awarded a game ball to Jackson. Others were celebrating their first postseason victory, like cornerback ﻿Marlon Humphrey﻿, but everyone recognized the significance of what had transpired.

“I’m happy for myself but I’m almost more happy for Lamar,” Humphrey said. “It sucks to be in his position at times that when you lose, it’s all his fault. It’s nobody else’s fault. It wasn’t the defense’s fault, it was Lamar’s fault. … He can play his heart out and some other guy is going to fall short. I know it’s a team game, but it seems like whenever it’s a loss, it’s always just his fault.”

With that weight now off his shoulder, it will be fun to see just how far Jackson can take the Ravens. We sometimes forget that he’s just 24 years old with so much growth to come. It might be a stretch to say he’s playing with house money the rest of these playoffs, but not by much. And that makes him and the Ravens all the more dangerous.