To stick or to twist? Buoyed by his side scoring their first touchdowns this month, Tennessee Titans head coach Mike Vrabel took a gamble.

With 31 seconds on the clock, Tennessee were trailing by a point after Luke Stocker’s touchdown. A successful extra-point conversion could take the game to overtime, but Vrabel had other ideas.

Titans quarterback Marcus Mariota failed twice on a go-ahead two-point conversion – the first was ruled out by a defensive holding call and safety Adrian Phillips tipped away the second – as the Los Angeles Chargers held on to win 20-19, their fourth straight victory. 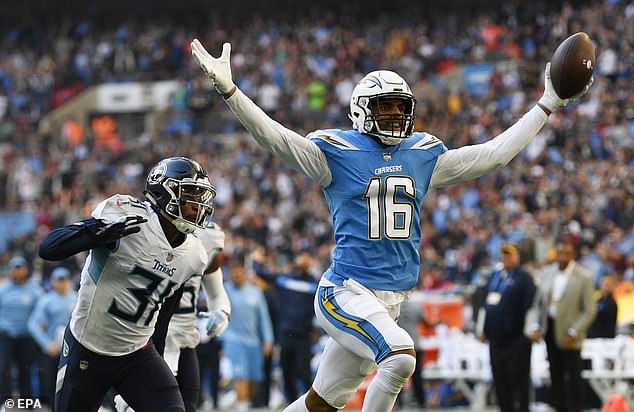 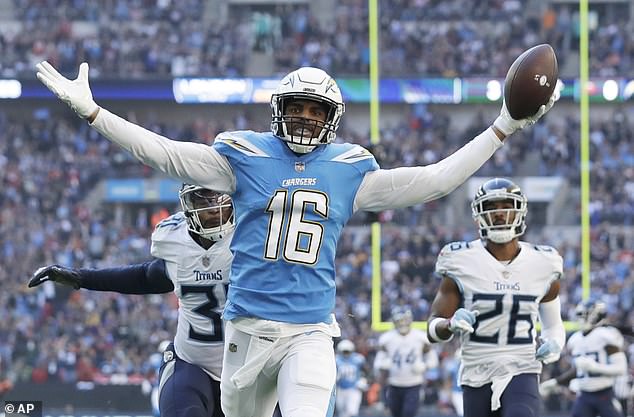 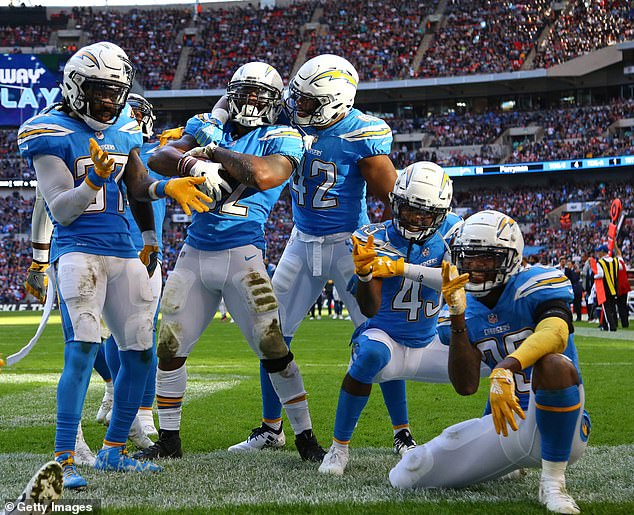 It was an aggressive decision, reflecting a general trend across the NFL, and it was one Vrabel said he would do again.

‘If there was less than 40 seconds, we were going to go for two and win the game,’ Vrabel said after the game.

‘I’ve got a lot of faith in our players. They’ve been converting third downs and converting in those situations. Marcus was doing everything we need him to do, keeping plays alive. Not going to second guess the call. Just didn’t work out.’

Mariota agreed, saying: ‘I love that he has the confidence in us to go make that. We just didn’t execute,’ following a third successive defeat for the Titans (3-4).

After years of what-might-have beens, the Chargers (5-2) are serious contenders in the AFC, make no mistake. This was a gritty win, achieved without running back Melvin Gordon, ruled out with a hamstring injury.

The Chargers rushed for a meagre total of 47 yards and the victory, which was more convincing than the scoreline suggests, was down to Philip Rivers and all three units performing. 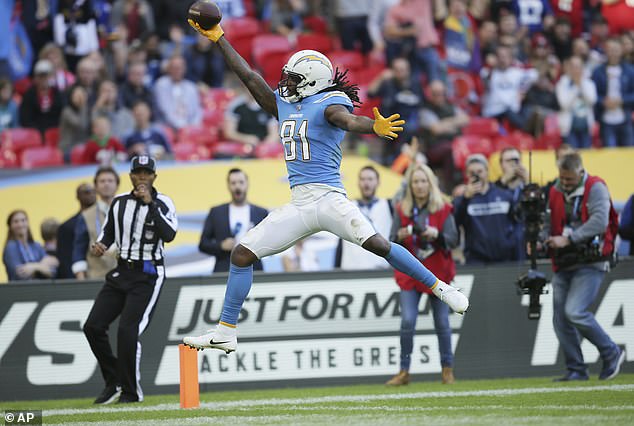 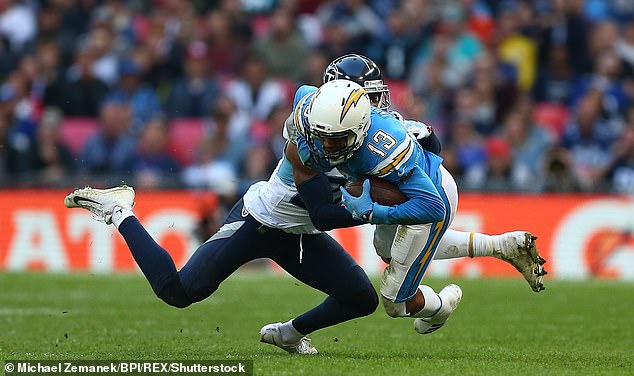 Rivers displayed trademark awareness, poise and accuracy to continue his impressive season as he threw for 306 yards with two touchdown passes.

The last time Rivers played in London, the Chargers, then of San Diego, lost a shootout to the New Orleans Saints ten years ago.

This victory was far removed from that game as Rivers acknowledged: ‘This was a gritty team win. We haven’t been in a game like this in a while where it came down to the last possession.

‘I think this team – you can feel it in the locker room how much they just enjoy – everybody enjoys winning, but winning together. That’s as excited as I’ve seen a locker room postgame in a while.’

Even before the late drama, the afternoon was a frustrating one for Mariota. Sacked twice, he threw for 214 yards as his receiving corps – with the exception of favoured target Tajae Sharpe – regularly went missing. 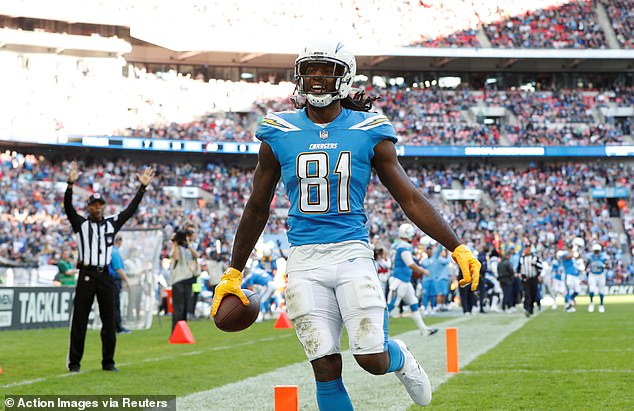 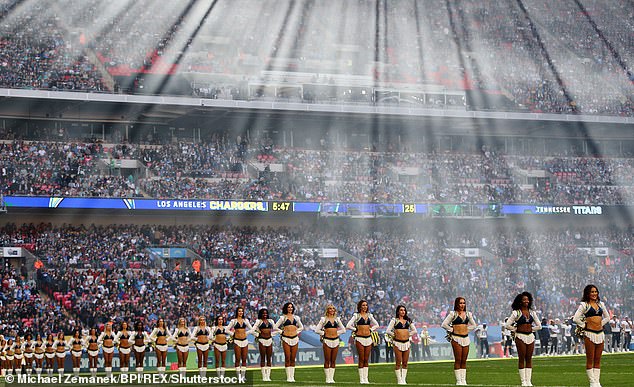 True, the Titans finally scored a touchdown for the first time in ten quarters when running back Derrick Henry bundled over from a yard.

They put themselves within touching distance of victory after tight end Stocker reeled in Mariota’s pass for a one-yard touchdown. But although they are competitive in the dismal AFC South, their struggles with the ball were all too evident here.

It looked as though the toothless Titans, who hadn’t mustered a touchdown in three out of six games, would break their miserable run on their opening drive of the afternoon.

They came within nine yards on their opening drive, but stalled in the red zone and had to settle for Ryan Succup’s 28-yard field goal.

The Chargers had no such issue. On their first possession, Rivers stepped back and connected with Tyrell Williams. Last week, he was unstoppable in a 38-24 win over the Cleveland Browns, and brushed cornerback Logan Ryan aside as he skipped to a 75-yard touchdown. 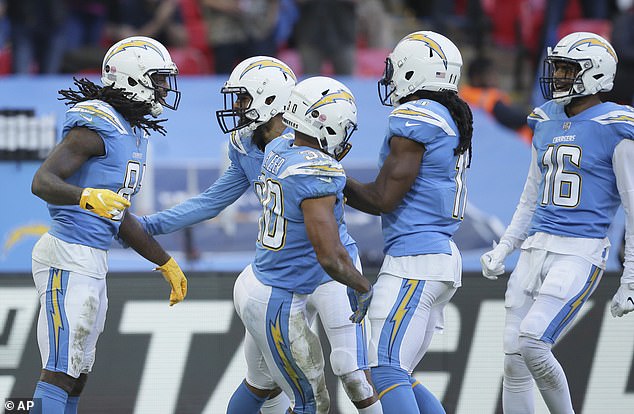 After trading field goals – Michael Badgley from 29 and Succup from 33 – he Titans ended the first-half as they started it, promisingly poised in the red zone. Yet the Chargers got a break when Melvin Ingram tipped the pass and linebacker Denzel Perryman pouched the first redzone interception of Mariota’s career.

Rivers tossed his second touchdown pass of the afternoon immediately after the break. If the first was easy, this was a cakewalk.

Mike Williams breezed past cornerback Kendrick Lewis after reeling in a 55-yard bomb and sauntered into the end zone. Game over? To the Titans’ credit it was not. After another promising drive, they finally managed to convert in the red zone.

Henry went over from a yard to score the Titans’ first touchdown in October and reduce the arrears to a score. Another Badgley field goal restored the Chargers’ seven-point lead but the game was not done yet.

Mariota launched a final drive. On third down, the Hawaiian was denied a rushing touchdown on review. Now on fourth and one, Mariota’s pass was caught by Stocker to electrify Wembley. But Vrabel made his choice and the two teams head back across the Atlantic heading in very different paths. 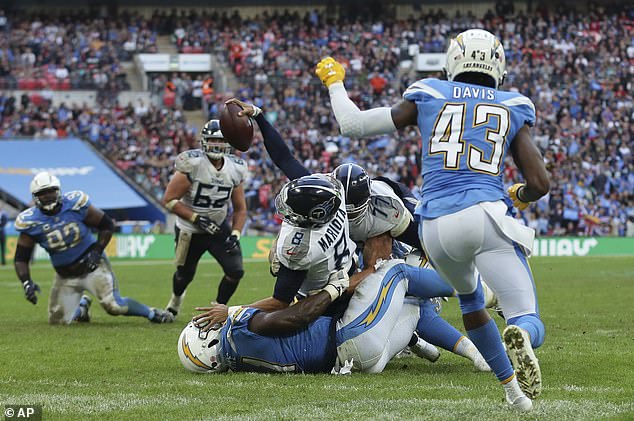