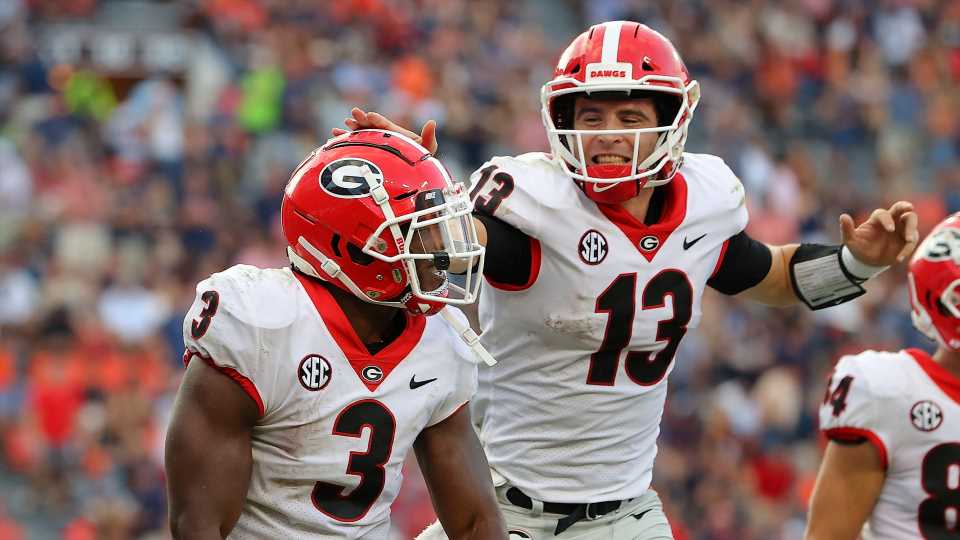 No. 11 Kentucky travels to No. 1 Georgia on Saturday in a huge SEC East showdown that could determine the division winner.

Kickoff is scheduled for 3:30 p.m. ET at Sanford Stadium, and the game will be televised on CBS.

Kentucky (6-0) is the surprising unbeaten team in the SEC. The Wildcats average 31 points per game with an offense led by Penn State transfer quarterback Will Levis, and the defense allows 17.5 ppg. Coach Mark Stoops continues to work wonders in Lexington, and this is his latest chance to prove it.

Georgia (6-0) bumped up to No. 1 in the polls, and the Bulldogs have the nation’s best defense. Quarterback JT Daniels (oblique) remains questionable for the game, but Stetson Bennett has played well the last two games. Coach Kirby Smart has the national-championship favorite now, and Georgia can take total control of the SEC East with a victory.

With that in mind, here is all you need to know about betting on the Kentucky-Georgia matchup.

—The Bulldogs are 5-1 ATS this season, and their last two games against SEC opponents hit the under. Georgia is 27-3 S/U as a home favorite since Smart took over in 2016.

—The Wildcats also are 5-1 ATS this season, and they covered as an underdog against Florida. Kentucky is 3-7 S/U in their last 10 games as a road underdog.

—Kentucky’s running game. The Bulldogs allow just 2.2 yards per rushing attempt this season, which is No. 3 in the nation. The Wildcats must establish a running game with the tandem of Christopher Rodriguez Jr., who averages 6.4 yards per carry, and Smoke Kavosiey, who averages 5.8 yards per carry. Rodriguez had 20 carries for 108 yards in last year’s meeting, a 14-3 loss. Can Will Levis add balance in the passing attack? That would give the Wildcats a chance.

—Stetson Bennett again? Bennett continues to be an efficient option for the Bulldogs in place of Daniels. Bennett has hit 21 of 32 passes for 303 yards with two TDs and no interceptions in victories against Arkansas and Auburn. He’s managed the offense, and he will have the advantage of being at home. Bennett struggled in last year’s matchup against the Wildcats. He completed 9 of 13 passes for 131 yards and two interceptions. Zamir White carried the offense, however, with 136 yards and a TD.

—Will Levis’ best game. Kentucky is going to need it. He has had success with Wan’Dale Robinson and Josh Ali in the passing game, but they are up against a talented Georgia secondary that has produced eight interceptions. Levis has yet to pass for more than 200 yards in an SEC game.

Georgia has not allowed an offensive TD in the first half of a game this season and only three in six games. It’s an absurd run of success by the nation’s best defense, and that’s helped Georgia build huge half-time leads. The Bulldogs have led by 14 points or more at half in every game with the exception of the season-opener against Clemson. Kentucky cannot afford to be down by double-digits at halftime.

The line has dropped almost three points from its open, which is a sign of respect for the Wildcats. Georgia, however, has been uninterrupted in its approach on both sides of the ball. Kentucky will have to go off script earlier than expected because of that Bulldogs’ run defense, and Bennett will continue to make good decisions with the football. The home crowd will be fired up, too. Georgia covers again.