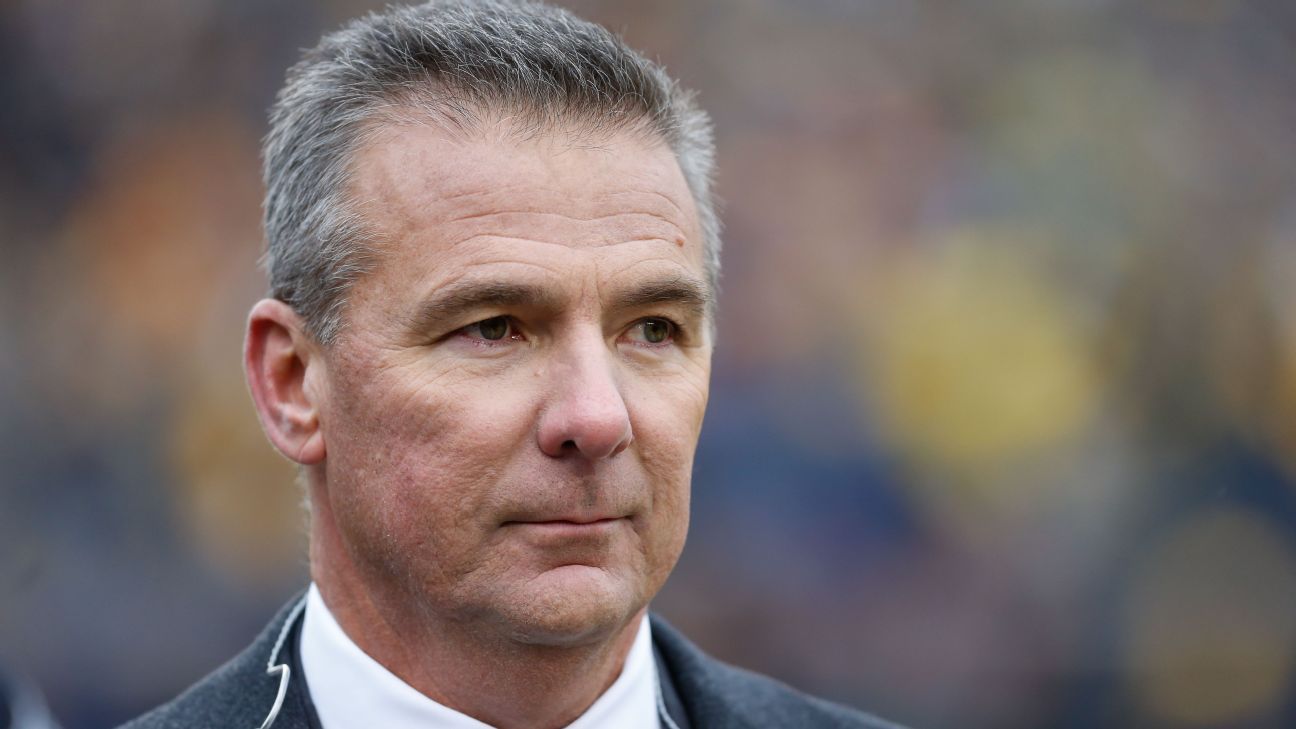 JACKSONVILLE, Fla. — Now that he has the job, new Jacksonville Jaguars head coach Urban Meyer has to know it’s coming.

After the way his tenures ended at Florida and Ohio State, it’s going to be one of the first things he’ll need to address whenever he does his first news conference. And it’s something that everyone — especially those inside the organization — will be monitoring for however long he’s here.

The questions about his health.

It’s what ended his run at Florida in 2010 and Ohio State in 2018. The first was a heart scare that turned out to be something else and the second was a congenital arachnoid cyst in his brain. Both conditions were exacerbated by the stress and demands of running major college football programs, not the least of which were recruiting and dealing with the numerous small fires that pop up among 18- to 21-year-olds.

And winning. The pressure from boosters, fans, players and administration were intense, but nothing compared to what Meyer placed upon himself. All that took a toll on Meyer and twice forced him into retirement.

It’ll be a little different in the NFL. He doesn’t have to recruit. His players are, with a few exceptions, much more mature and most understand what it means to be a professional. He won’t be dealing with players’ parents calling and asking why their kid isn’t playing, which, yes, does happen on the collegiate level.

But the pressure to win will still be there. Especially in Jacksonville, where the franchise has had one winning season since 2007 and has lost 10 or more games in nine of the past 10 seasons. Meyer won two national titles at Florida and one at Ohio State, and Jaguars fans will expect him, especially with Trevor Lawrence, to get the team to the Super Bowl. So can he deal with all of that and not have the issues he did at Florida and Ohio State?

Meyer was diagnosed in January 2010 with esophageal spasms, which caused the severe chest pains he had been experiencing and sent him to the hospital the night after the 2009 SEC championship game. He began taking medication and made significant lifestyle changes and eventually resumed coaching at the start of spring practice in March 2010 after a short leave of absence. However, one day after the Gators’ final regular-season game in 2010 — a 31-7 loss at Florida State — Meyer announced he was resigning for good and his final game would be the Outback Bowl.

Meyer had another health scare in 2018 when he dropped to his knees on the sideline during a game against Indiana with severe pain in his head. Meyer later revealed that he was dealing with an ongoing issue related to a congenital arachnoid cyst in his brain, which resulted in severe headaches that had gotten worse over the previous two years. Meyer eventually announced on Dec. 4 that he was retiring from coaching after the Rose Bowl for health reasons.

Since then, he has served as an assistant athletic director/athletics initiatives and relations at Ohio State and as an analyst with Fox Sports. No overwhelming pressure in either role. He’s not losing weight and looking haggard the way he did in his final two years at Florida. He looks happy and unburdened. But now he’s getting back in.

And he’s joining a team that just lost 15 consecutive games. That’s nearly half the number of games Meyer lost in his 17-year college coaching career (32). He has lost more than three games in a season just two times, has two undefeated seasons and six one-loss seasons, and he lost 15 games total in his past nine years as a head coach.

The Jaguars do have some building blocks in place on both sides of the ball (RB James Robinson, WRs Laviska Shenault Jr. and DJ Chark Jr., LB Myles Jack, DE Josh Allen and CB CJ Henderson) and they will be adding Lawrence with the first overall pick. But to expect the Jaguars to go from 1-15 to 12-4 or 13-3 is ludicrous. They will struggle, at least in 2021. There’s also this: Going 10-6 in the NFL is a very good season, most likely good enough to make the playoffs and possibly win a division. But that’s still six losses, which is a number that Meyer has never experienced, and if repeated often enough, it gets college coaches fired.

Meyer couldn’t stand losing in college. It ate at him, kept him up at night, made him miserable, and eventually cost him his health and twice chased him from the game. Six losses in one season? There’s no telling how he’d respond to that kind of year.

Can he handle losing six games, maybe even seven, and still consider that successful?

Meyer is smart. He knows all this, and he has undoubtedly talked it over with his family, friends and colleagues and decided that he will be able to handle the stress and pressure of the NFL. He knows what he’s risking if he can’t. But he also has to know the questions are coming.