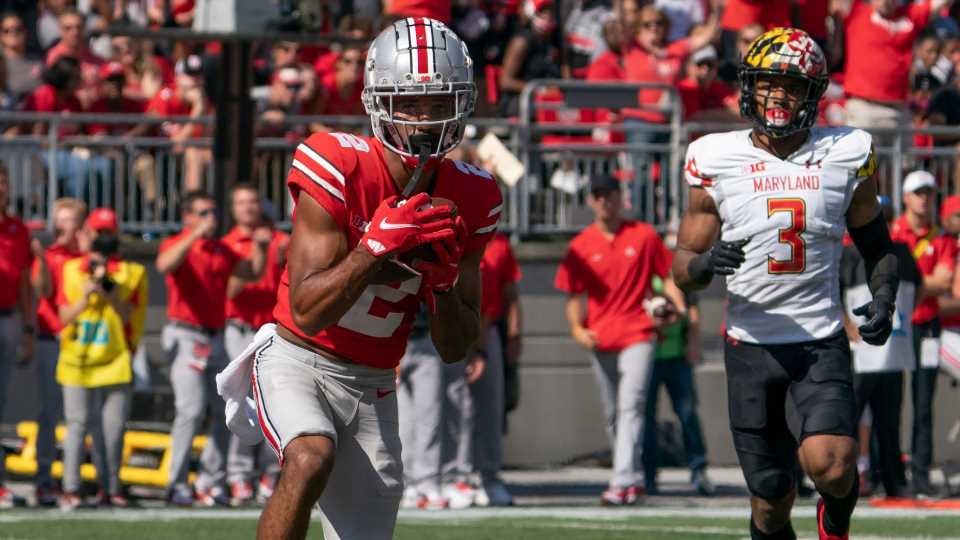 Ohio State is still the team to beat in the Big Ten.

The Buckeyes are 20-0 in conference play under third-year coach Ryan Day, and they have outscored opponents 940-237 in that stretch. Ohio State shook off a Week 2 loss to Oregon and has scorched opponents with what might be the most-explosive offense in college football.

But Saturday offered a taste of what could be the most-exciting Big Ten race in years. Who wants a piece of the Buckeyes? Three unbeaten teams remain in the conference.

Iowa? The Hawkeyes rallied at home in a top-five showdown against Penn State for a 23-20 victory. Iowa added four more interceptions to its FBS-best total of 16. Iowa is the odds-on favorite to get through Big Ten West play with one loss or less, and they beat Ohio State 55-24 in their last meeting on Nov. 4, 2017.

Michigan State? The Spartans have the leading rusher in the FBS in Kenneth Walker III, and second-year coach Mel Tucker has quietly built an explosive offense with the help of quarterback Payton Thorne and receivers Jailon Nailor and Jayden Reed. The Spartans are the last Big Ten team to win at Ohio Stadium; a 17-14 shocker on Nov. 21, 2015.

Oct. 30 could have two top-10 showdowns. Penn State and Ohio State will meet in what could be a battle of one-loss teams while Michigan and Michigan State should be  a battle of unbeatens for the Paul Bunyan Trophy in East Lansing. Iowa travels to Wisconsin, too.

That will set up November. Michigan travels to Penn State (Nov. 13) and Michigan State faces Ohio State (Nov. 20). All that sets up The Game, which Michigan canceled last season because of COVID-19 issues.

All of that is back on, and the Big Ten is the most-compelling race among the Power 5, even if the Buckeyes are the team to beat.

Here are some winners and losers from the best Saturday of the college football season to date.

Texas A&M faced its first three-game losing streak under Jimbo Fisher and the comparisons to former coach Kevin Sumlin were out in full force ahead of a prime-time game against top-ranked Alabama.

The Aggies responded with a program-building moment. Fisher became the first former assistant to beat Nick Saban head-to-head, and Texas A&M pulled out the biggest upset of the season in a 41-38 shootout at Kyle Field.

Zach Calzada shook off a leg injury in the fourth quarter to lead the game-winning drive, and the Aggies withstood 522 total yards of Alabama offense for the victory.

Not all one-score victories are equal. Oklahoma started 5-0 this season, but close calls with Tulane, Nebraska, West Virginia and Kansas State had naysayers questioning the stop-and-start offense heading into the Red River Showdown.

Texas led 28-7 after one quarter before a different storyline emerged.

Lincoln Riley benched Spencer Rattler in favor of true freshman Caleb Williams, who in turn passed for 212 yards, rushed for 88 more and totaled three TDs in a 55-48 thriller. It’s another one-score victory, but it’s more than that.

Hartman continues to be an under-the-radar success story. He now has 47 TD passes and 18 interceptions.

Wake Forest has won back-to-back three-point games the last two weeks and is the lone unbeaten team in an impossible-to-predict ACC. Dave Clawson has built steady success over eight seasons, and the Demon Deacons clinched its sixth consecutive bowl appearance.

Can this team be more than that? Wake Forest has a bye week before a matchup at Army, then it’s the Tobacco Road tour against Duke, North Carolina and N.C. State. Could this team take a 10-0 record to Death Valley to face Clemson on Nov. 20 in the ultimate role reversal? That is a storyline worth watching.

The Cougars looked like they could be another potential fringe CFP contender after racking up three victories against Pac-12 schools in September. The Cougars also had a schedule that had five more Power 5 opponents than Cincinnati.

A BCS buster got in the way. Boise State took advantage of four BYU turnovers in a 26-17 upset that knocked the Cougars out of playoff and New Year’s Day Six contention. Jaren Hall passed for 302 yards in the loss after missing the last two games with an injury.

Better days are ahead for BYU with Big 12 membership, but this game was another reminder that the program is not immune to upsets from other Group of 5 powers. Even a below-.500 Boise State team can play spoiler.

For the preseason polls are meaningless types, we have some bulletin board material.

Three teams in the top 15 in the SN Preseason Top 25 are 3-3 halfway through the season.

LSU (preseason No. 11) allowed 330 rushing yards in a 42-21 loss at Kentucky, which is going to put significant heat on coach Ed Orgeron heading into the second half of the season. It’s difficult to think about bowl eligibility knowing the next four opponents on the schedule are ranked.

The Huskies are the lone 0-7 team in the FBS after a 27-13 loss to formerly winless UMass, a game in which fans stormed the field afterward. Is that the low point?

UConn opted out of the 2020 season, Randy Edsall stepped down on Sept. 6 and interim coach Lou Spanos tested positive for COVID-19 and missed Saturday’s game.

It’s senseless to pile on from there.