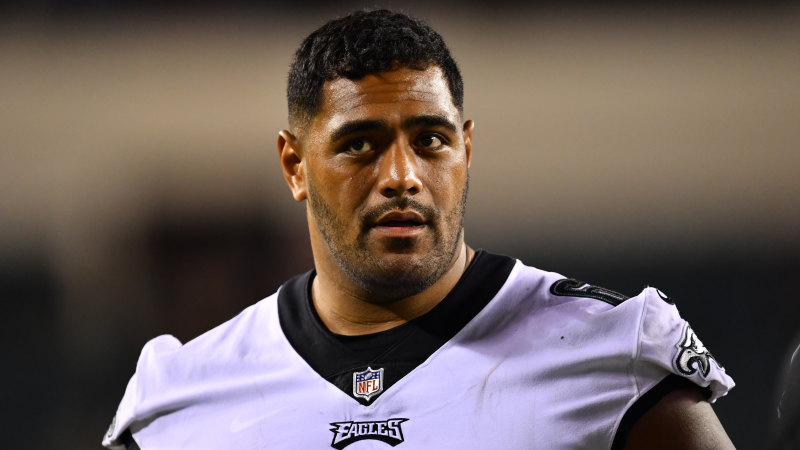 When Jordan Mailata first arrived in the United States, with his NFL journey all ahead of him, he weighed 143 kilograms and had 10 per cent body fat. NFL scouts looked at him and shook their head: too small.

“You have no gut,” they told him. “If you’re going to play in the offensive line, you need a gut.” 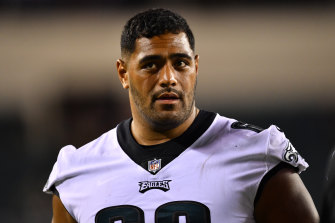 Mailata leaves the field after a pre-season game against the Patriots last month.Credit:Getty

That was four years ago when Mailata was a baby-faced South Sydney prop rejected by rugby league — because he was too big.

On Monday morning (AEST), the Bankstown-born 24-year-old will squat down at left tackle for the Philadelphia Eagles, entrusted with the heavy responsibility of protecting the blindside of young quarterback Jalen Hurts, against the Falcons at Mercedes-Benz Stadium in Atlanta.

At what weight is hard to tell. There’s been different numbers in numerous stories in recent weeks about how much he’s packing into his monstrous 203cm frame.

“Now, if I could do the math,” Mailata says when I ask to confirm his current stats. “Carry the two over the five, minus … I’ll be honest, I don’t know what I am in kilograms, but I think I’m 155 to 160kg. Playing in the offensive line, it’s more based on technique so I can afford to put on those extra kilos but making sure my body’s flexible at the same time, able to bend, squat, hold that squat for a couple of seconds, then come off the rock. It’s just more repetitions. When I first came here, I was still pretty small. I was 148kg, 150kg. They’re used to seeing players in the O-line with guts.” 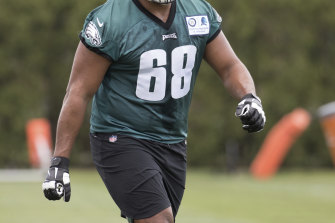 Jordan Mailata will start at left tackle for the Philadelphia Eagles against Atlanta on Monday morning.Credit:AP

Mailata has been described various ways since coming into the NFL via their international pathways program, often as a “freak show” because he’s the “former rugby player” still learning the game let alone the playbook.

But shit, as they say, just got real.

He performed so well in summer camp that he’s edged ahead of Andre Dillard, the Eagles’ first-round draft pick in 2019, to be named starting left tackle, a position which brings all sorts of pressure because of its importance in stopping rushing defenders trying to get their paws on the crown jewel of the quarterback.

Some context: Mailata was a seventh-round draft pick for the Eagles in 2018 and only then after a highlights package sent around to rugby union clubs found its way into the hands of NFL officials looking for appropriate players for its international program.

“I want to scrub that rugby past. I want to be seen as football player not the boy from the Bankstown Bulls.”

“Left tackle is often the second-highest paid player on a team because he’s protecting the QB’s blindside in most cases,” ESPN’s Phil Murphy explains. “For Jordan to come this far speaks volumes but it’s going to take time. People shouldn’t make career-long determinations on a week-to-week basis. You can’t hide your starting left tackle. If he doesn’t aim up, you’ll hear about it. The NFL is hardly a philanthropic organisation. Teams don’t look for feelgood stories. They’re looking for the best person for the job.”

The league’s highest-paid person at left tackle is the San Francisco 49ers’ Trent Williams, who earns AUS$31.4 million a season, making him the richest offensive lineman in history. Mailata is currently in the final season of his current four-year rookie deal, worth about AUS$1.2m in 2021, but a strong start will trigger an upgrade worth many millions more. Tens of millions more.

Money’s nice but the NFL means more to him than a payday. Speaking to Mailata from Philadelphia earlier this week, it becomes very clear, very quickly, he’s grown weary of references to his former sport. He doesn’t care if he’s a sideshow; he simply doesn’t want his lack of experience to be used as an excuse.

“I’ll never forget my rugby league life, but I want to be accountable and professional in the sport I’m in now,” he insists. “I want people to hold me accountable because I’m not good enough to apply the technique, not giving me the benefit of the doubt because I’m a rugby player. It’s up to me to handle my business. That’s why I want to scrub that rugby past. I want to be seen as football player, not the boy from the Bankstown Bulls.” 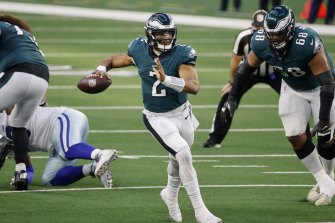 The main role for Mailata (right) will be protecting Philly quarterback Jalen Hurts.Credit:AP

Philadelphia sports fans will only cut him slack for so long. Sure, they love an underdog — even fictional ones like Rocky Balboa — but they’re notoriously fickle. Just ask Carson Wentz, the starting quarterback Hurts replaces. Just ask Ben Simmons. Just ask Joe Biden. “Philadelphia fans are the most informed and most obnoxious fans in the world,” the US President said earlier this year. He and his wife, Jill, are Eagles fans.

“Very,” he laughs. “People care more here. The culture of the city is all about sports. We know everything. We follow the minutiae of every single transaction. The Eagles are the kings here in Philly. Turn on the radio, it’s all about the Eagles. Downtime in June, they’re talking about the Eagles. It’s what people care about here the most.

“But they’ll give Jordan a long leash. He has a fun personality off the field, that helps. He’s been honest and accountable whenever he talks to the media. The bar is lower for him. People enjoy rooting for him. It would take a lot for people to turn on him. They think he’s going to be the long-term answer.” 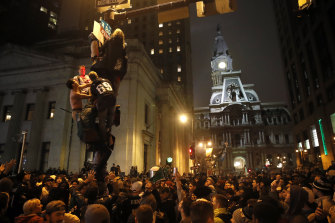 Eagles fans took to the streets in Philadelphia after winning the Super Bowl three years ago.Credit:AP

Which is daunting in itself. He’s got big padded pants to fill.

“His selection is really significant when you look at the historical context of what the Eagles have had at left tackle,” Gowton continues. “They had Tra Thomas in the 2000s, an All-Pro player. Then Jason Peters, a Hall of Famer [who was part of the Eagles team that won Super Bowl LII in 2018. The question then was, ‘Who replaces him? A legend?’ The hope was Andre Dillard, but he hasn’t been looking good.”

Murphy laughs, too, when asked about the fire that burns inside Philadelphia fans.

“They are honest,” he says. “It’s a great town to be a hero. They love the Rocky story. But they’re among the harshest critics. Anyone on that team who falls short will hear it from the hometown supporters. But Jordan can be someone they will rally behind.”

Mailata’s first came to understand the importance of left tackle because of Hollywood. He watched Remember the Titans, starring Denzel Washington, and then The Blind Side, starring Sandra Bullock, which tells the story of young offensive lineman Michael Oher, a hulking player from an impoverished background who, thanks to his adoptive parents, eventually played in the NFL.

“As soon as that movie came out, guys at high school were calling me ‘Big Mike’,” Mailata recalls, shaking his head about the irony of it coming true.

Many people at the Eagles showed great patience, but none more than offensive lineman coach Jeff Stoutland, who taught him the importance of repetition and discipline, especially when it comes to learning a playbook that Mailata says “looks like a hundred-sided Rubik’s Cube” so complex he nearly “fainted” when he saw it.

“My old man means the world to me. I didn’t realise that until I got older. The lessons he taught me, I understand it now.”

“The way my own father raised me is the same way he’s teaching me how to play football: it’s tough love but I know deep down when he’s cussing me out and calling me all sorts of names, I know he loves me. I just have to find my way through the insults and work out this is what he’s trying to tell me. I’m grateful to have someone like Coach Stout in my life. Without him, I wouldn’t know anything.”

“Mum worked full-time, six days a week, 12 hours a day,” Mailata recalls with emotion in his voice. “Dad was a handyman, worked two jobs … We didn’t have much growing up. As a kid, I never understood why my dad yelled at me, but it was tough love. My old man means the world to me. I didn’t realise that until I got older. The lessons he taught me, I understand it now.”

As Mailata realises his NFL dream, other Australians in the Eagles locker-room are hoping to follow. St Kilda’s Arryn Siposs, who played 28 AFL matches, is their new starting punter while former Adelaide plumber Matt Leo is a defensive end on the practice squad. 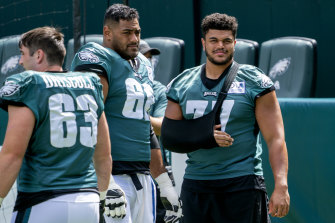 Mailata, centre, has edged ahead of Andre Dillard, right, in the Eagles’ pecking order ahead of the NFL season.Credit:AP

“Everyone always gives us a bunch of stick,” Mailata says. “Everybody always says, ‘Hey mate!’ or ‘You gonna eat some Vegemite?’ and they do their best Australian accent. They sound more British to be honest. We all have different journeys … Incredible to see three different stories on one team.”

Mailata won’t buy into discussion about which rugby league players could follow in his footsteps. He’s concerned about his own journey. But he does have some advice for every Polynesian kid wondering where their life might take them.

“Don’t be afraid to dip your toe in the water,” he offers.

“Drown in it and learn how to swim. Any Poly kids who are thinking about doing it, do it. For me, there was no Plan B. It’s a pride thing. To be a Polynesian, to wear that last name on your back, the name of my dad who comes from a small Samoan village, I just didn’t want to fail my last name, my family.”