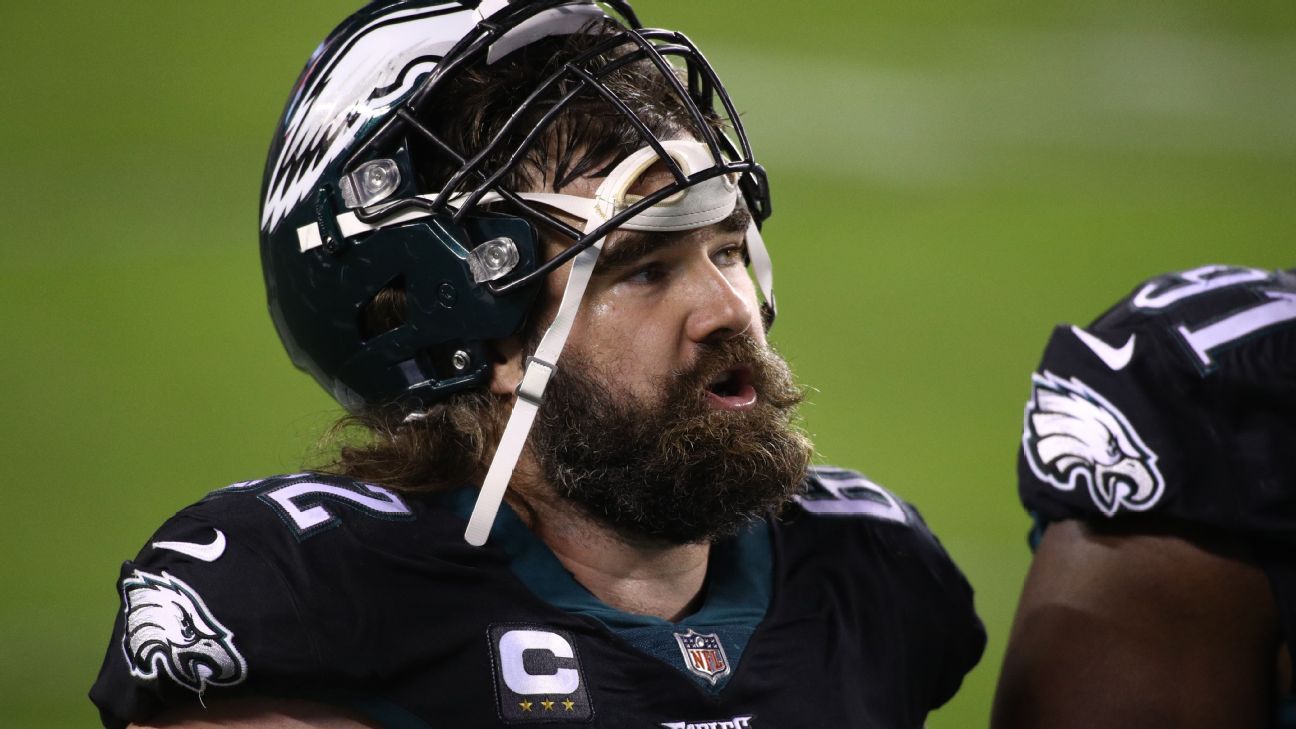 PHILADELPHIA — Eagles center Jason Kelce acknowledged he was a “little surprised” by the decision to pull quarterback Jalen Hurts in favor of Nate Sudfeld in the fourth quarter of Sunday’s game against Washington and that he approached coach Doug Pederson about the move but said the discussion was nonconfrontational.

“I went up to Doug and asked him if he was taking Hurts out, he said, ‘Yes, I think Nate’s earned the right to play,'” Kelce wrote in an Instagram post Wednesday. “I said, ‘Everyone else is staying in?’ He said, ‘Absolutely.'”

“At no point was anything from me or anyone else confrontational,” Kelce added. “We all knew leading into the game that Sudfeld was told to be ready to play, and that Doug wanted to see what he could do in a game situation. All of us during the week leading up were excited for Nate, a guy that has been with us for 4 years to get an opportunity in a real game to show the world what he can do. We all have complete confidence in Nate as a player, there’s a reason he’s been here this long, and a reason the team brought him back. And that’s because we feel like Nate is a guy we can win with.”

The conversation Kelce addresses appears to be his response to a Philadelphia Inquirer report that players were “shocked and outraged” by Pederson’s decision to go to Sudfeld.

What surprised Kelce, and other players on the team, was the timing. The Eagles were down three points when Sudfeld replaced Hurts early in the fourth quarter, and the next two possessions resulted in turnovers.

Though the game had no playoff implications for the Eagles, the competitive juices were flowing — even for players who were unable to participate.

“If I’m being honest, nobody liked the decision. Nobody. That’s all I can say,” running back Miles Sanders, one of nine Eagles players ruled out with injuries for the game, told 94.1 WIP on Tuesday. “I don’t know who was the main person behind that decision, but all I know is a lot of people on the team were confused.”

Defensive end Brandon Graham thinks the confusion was created by circumstance. Due to the NFL’s COVID-19 protocols, injured players aren’t allowed on the sideline and didn’t hear when Pederson told the team that some players who don’t normally get an opportunity should be prepared to play.

The move from Hurts to Sudfeld in a contested game that decided the winner of the NFC East sparked reaction throughout the league, including from New York Giants coach Joe Judge, who strongly suggested Philadelphia’s actions were disrespectful to the game. The Giants would have claimed the NFC East title with an Eagles win over Washington.

Graham put the onus back on the Giants, suggesting they should have handled their own business instead of relying on a Washington loss to to stamp their ticket to the playoffs.

“Some people just didn’t like the decision because they want to see Hurts in there, but at the end of the day, this game didn’t mean anything for us. We were still going home, so why not see who else you got out there?” Graham told 94.1 WIP on Wednesday. “And if people have a problem with it, don’t put yourself in that position, the Giants. Don’t put yourself in that position, win your game.”

With the loss, the Eagles secured the sixth overall pick in April’s NFL draft. A win against Washington would have moved them to ninth overall.