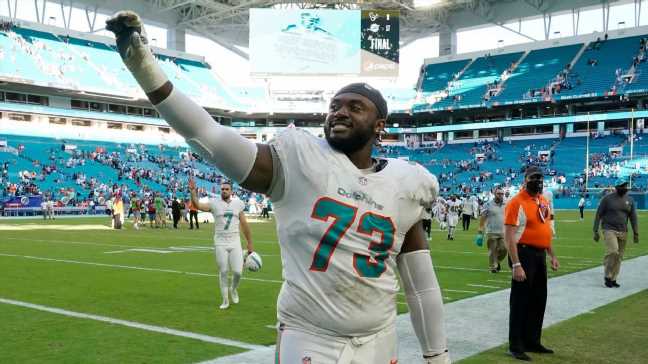 Jackson will miss at least the next four games.

The former first-round draft pick left Miami’s game against the New England Patriots in Week 1 with an ankle injury and didn’t return. McDaniel said Monday that Jackson could have toughed it out and played in an emergency but ultimately the team doesn’t want his injury lingering into the season.

The Dolphins play the Ravens, Bills, Bengals and Jets over their next four games; former second-round pick Greg Little is expected to start in his stead.

McDaniel also said the Dolphins will likely call up an offensive lineman from the practice squad.

It could be an inopportune week for Miami’s offensive line — left tackle Terron Armstead is considered questionable for Sunday’s game against Baltimore because of a toe injury. McDaniel said Armstead will play if he can and that the issue will likely be a matter of pain tolerance.

Miami drafted Jackson in the first round in 2020, and he has started 29 of 31 possible games since. He was drafted as a left tackle before moving to left guard last season and right tackle in 2022.