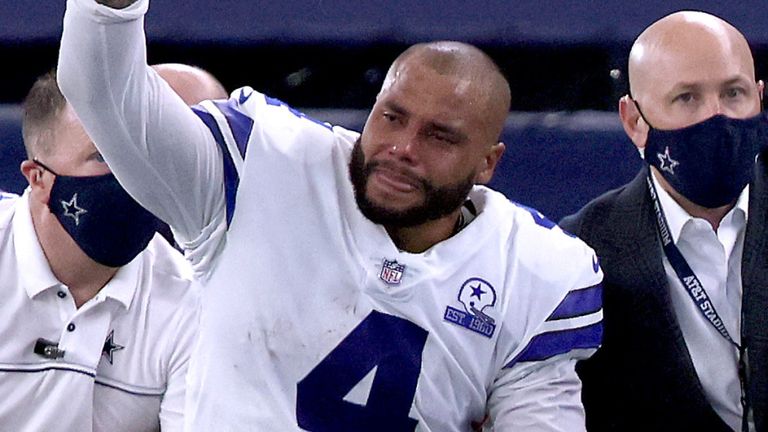 Dallas Cowboys quarterback Dak Prescott is to undergo right ankle surgery after suffering a compound fracture and dislocation during their 37-34 win over the New York Giants on Sunday.

The gruesome injury will end Prescott’s season. “I feel terrible for him,” Cowboys coach Mike McCarthy said after the game. “He was having a tremendous year. He’s made such an impression on me.

“He’s the leader of this team. This will just be another chapter in a great story. He’s a fine young man.”

Prescott sustained the injury in the third quarter after gaining nine yards on a quarterback run, getting tackled by Giants safety Logan Ryan.

He immediately clutched his right lower leg. After a cast was placed on the leg, Prescott, crying, was carted off the field at AT&T Stadium in Arlington, Texas.

Among the people who came near Prescott while he was being attended to on the turf was Giants offensive coordinator Jason Garrett, the former coach of the Cowboys.

Dallas running back Ezekiel Elliott didn’t hold back on his feelings about the injury to Prescott. “It sucks,” he told reporters. “I know we won; it just sucks to lose Dak, our leader. And I was talking to the guys and it’s going to take all of us.

“It’s going to take all of us to fill that void that we’re going to be missing from (No) 4. Just gotta go out there and play for him.”

Prescott is playing on a one-year franchise tag worth $31.4m this season. The Cowboys reportedly offered him a five-year, $175m deal in the offseason that was turned down before contract talks broke down.

Dallas led 24-23 at the time of the injury to Prescott. Veteran quarterback Andy Dalton, who signed in the offseaason after nine seasons with the Cincinnati Bengals, came into the game in Prescott’s place.

Rodgers: 'Absolutely crazy' to think Mike Zimmer is on hot seat after 1-5 start