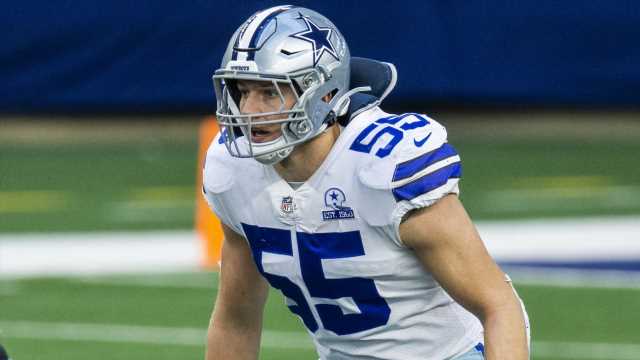 NFL Network’s Jane Slater reported that the Cowboys informed Vander Esch’s agent that they would not be exercising the option on the linebacker due to ongoing salary cap uncertainty.

Slater added that Dallas hopes to sign LVE to a contract extension before his current deal expires in 2022.

The fifth-year option on the linebacker would have cost the Cowboys $9.145 million.

Monday marked the deadline for clubs to make a decision on fifth-year options for their 2018 first-round draft picks.

Declining the option wasn’t a surprise, particularly after the Cowboys used a first-round pick on linebacker ﻿Micah Parsons﻿. The Cowboys also spent a fourth-round selection on linebacker ﻿Jabril Cox﻿, who was viewed as a value selection by Dallas after the LSU LB was projected to go on Day 2 of the draft.

The 25-year-old Vander Esch burst onto the scene as a rookie, earning a Pro Bowl bid in his first season, compiling 140 tackles, two INTs, and seven passes defended. Injuries, however, have conjured questions about his future. LVE missed 13 games the past two seasons due to a neck injury, including six in 2020.

Now, 2021 will be a contract year for Vander Esch.