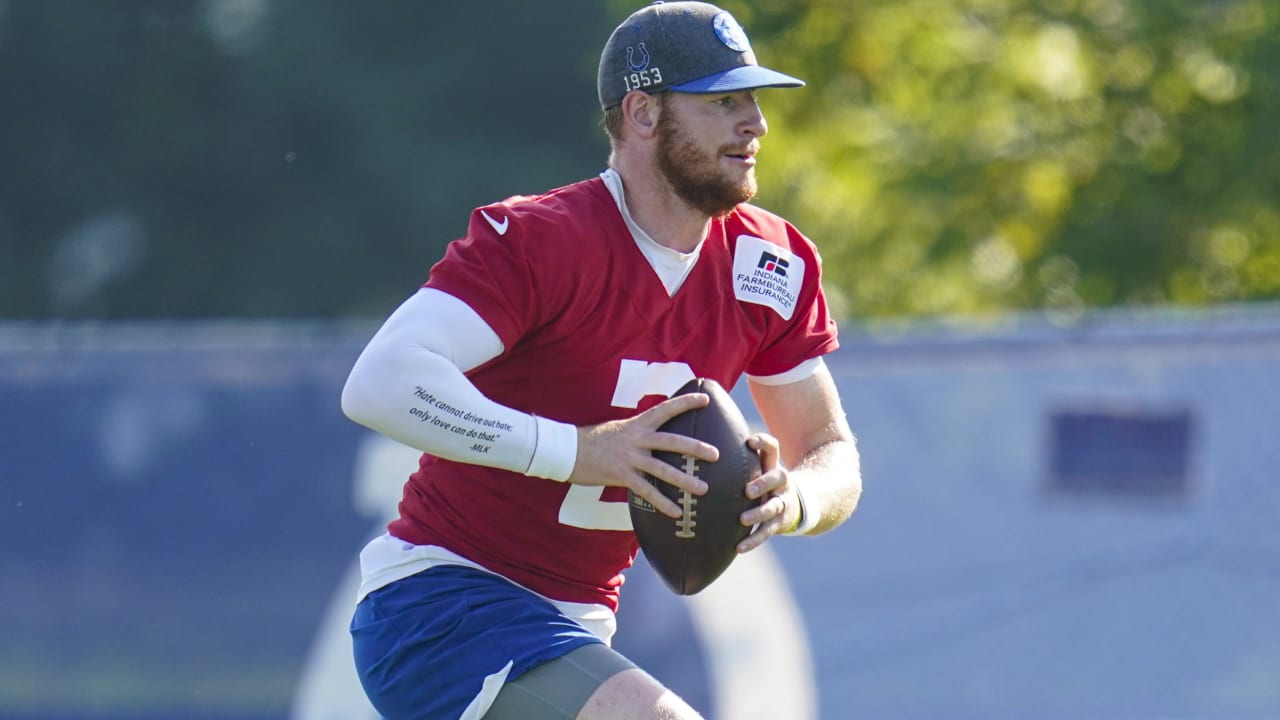 INDIANAPOLIS — Carson Wentz will make his debut as the Colts’ starting quarterback in Sunday’s opener against the Seahawks with no restrictions, though the team will proceed with caution less than six weeks after foot surgery threatened his status for the start of the season.

“As far as what he can do, he can do everything,” Reich told NFL.com on Friday. “What will we actually call? Will we keep the reins on a little bit? Probably. Probably so. I just think that makes sense. I just think we’ll manage it. We’ll be smart. There’s some stuff in (the game plan) that we might call, but if we don’t have to call it — ‘Oh, let’s not take that chance.’ But I think he’s good. Every indication is he’s not limited in any way.”

After practice Friday, Reich acknowledged Wentz is “probably sore, I don’t think he feels 100 percent.” In a perfect world, Reich said, Wentz would play from the pocket and not run around too much, but his mobility looks pretty good in practice.

Having Wentz on the field at all is a victory for the Colts, who will have a different Week 1 starting QB for the fifth consecutive year and initially put a five- to 12-week timetable on Wentz’s recovery from surgery on Aug. 2 to remove a bone fragment from his foot.

Acquired from the Eagles in February for a 2021 third-round draft pick and a conditional 2022 second-round pick, Wentz was reunited in Indianapolis with Reich, who was Philadelphia’s offensive coordinator when Wentz was among the front-runners for NFL MVP in 2017 prior to a devastating knee injury. (﻿Nick Foles took over and led the Eagles to a win in Super Bowl LII.) A back injury and concussion also contributed to Wentz’s eventual exit in Philly. So, the prospect of starting his Colts career on the sideline was surely not alluring.

The timetable depended in part on what type of surgery Wentz ended up having, which wouldn’t be known until Dr. David Porter performed the procedure. If doctors needed to insert a screw to secure the chipped, splintered piece of bone — and sources say some feared he would — that’d sideline him two to three months.

Instead, doctors extracted the bone fragment and found no other damage. From that point, the timetable dropped to four to six weeks. And as long as Wentz got through the first two weeks without infection or other complications, the Colts were confident he had a good chance to be ready for Week 1.

“Everything went perfect,” Reich said. “Got through those first two weeks clean, was ahead of schedule, was already doing stuff probably eight or nine days after the surgery, was on the field throwing some footballs in some shape or form. I was like, ‘Ooh, he’s doing great’, and then that continued to progress.”

There was one more disruption. On Aug. 30 — the day Wentz was scheduled to return to 11-on-11 drills — Wentz and two teammates landed on the reserve/COVID-19 list because of a high-risk close contact with a staff member who tested positive, forcing them to isolate for five days. (Under NFL-NFLPA protocols, only unvaccinated individuals are forced to isolate without a positive test; upon his return, Wentz said his decision on vaccination remains “a fluid process.”)

But Wentz was back on the field when Week 1 preparations began and listed as a full participant on the injury report each day this past week. It was his most extensive work since the first week of training camp as he continues to learn his new teammates and an offense that’s not identical to what he and Reich ran in Philadelphia.

“The time on task is a big deal. He’s just (had) limited practices. That’s no excuse, but it’s just the reality,” Reich said. “He’s looked sharp, and I can feel him getting better every day.”