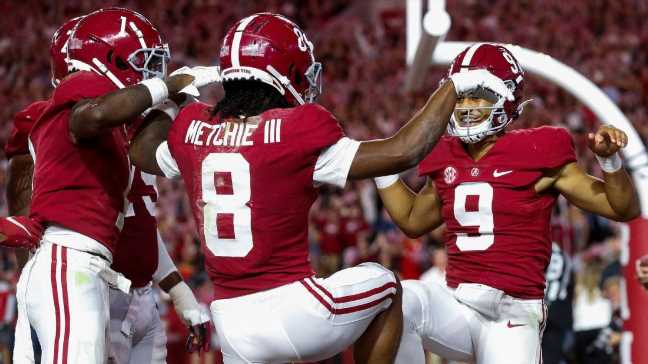 With Georgia on a bye week, the top spot was never in question in Week 8 but several other teams in the top 5 got pushed to the limit by over 20-point underdogs.

Cincinnati headed to Annapolis to face a 1-5 — and four-score underdog — Navy team but the Midshipmen came to play against the Bearcats. Navy trailed by only three at half before Cincinnati won the third quarter 14-0 to take control of the game. It wasn’t over just yet though as the Midshipmen scored 10 straight points in the fourth quarter and even recovered an onside kick late down 27-20. The Bearcats intercepted a pass, however, to keep their undefeated season and playoff hopes alive. Despite the close call, Cincinnati is a unanimous selection this week.

Oklahoma was also tested by a 1-5 opponent on Saturday but the Sooners didn’t need a dramatic interception to stay undefeated — just an explosive second half. After trailing at half 10-0 against Kansas, the Oklahoma offense found its footing and outscored the Jayhawks 35-13 over the final two quarters to avoid the upset. As one of the few undefeated teams left in the country, the Sooners are a favorite to make the CFP field at the moment but not a popular pick this week after the close call against the Jayhawks.

Alabama also had its hands full with Tennessee in Tuscaloosa, leading only 21-14 at half. But the Crimson Tide dominated the fourth quarter, outscoring the Volunteers 28-7, to avoid a second SEC loss. Nick Saban’s squad is present on 13 ballots this week.

Ohio State has bounced back from a Week 2 loss to Oregon nicely with five straight wins, including an 54-7 rout of Indiana Saturday night. The win streak has the Buckeyes on nine ballots ahead of a big game against Penn State next Saturday.

Michigan avoided any chance of an upset in a 33-7 win over Northwestern. The Wolverines keep gaining playoff momentum and got fives votes this week. They’ll face their bitter rival, undefeated Michigan State, next Saturday in a battle for the lead of the Big Ten.