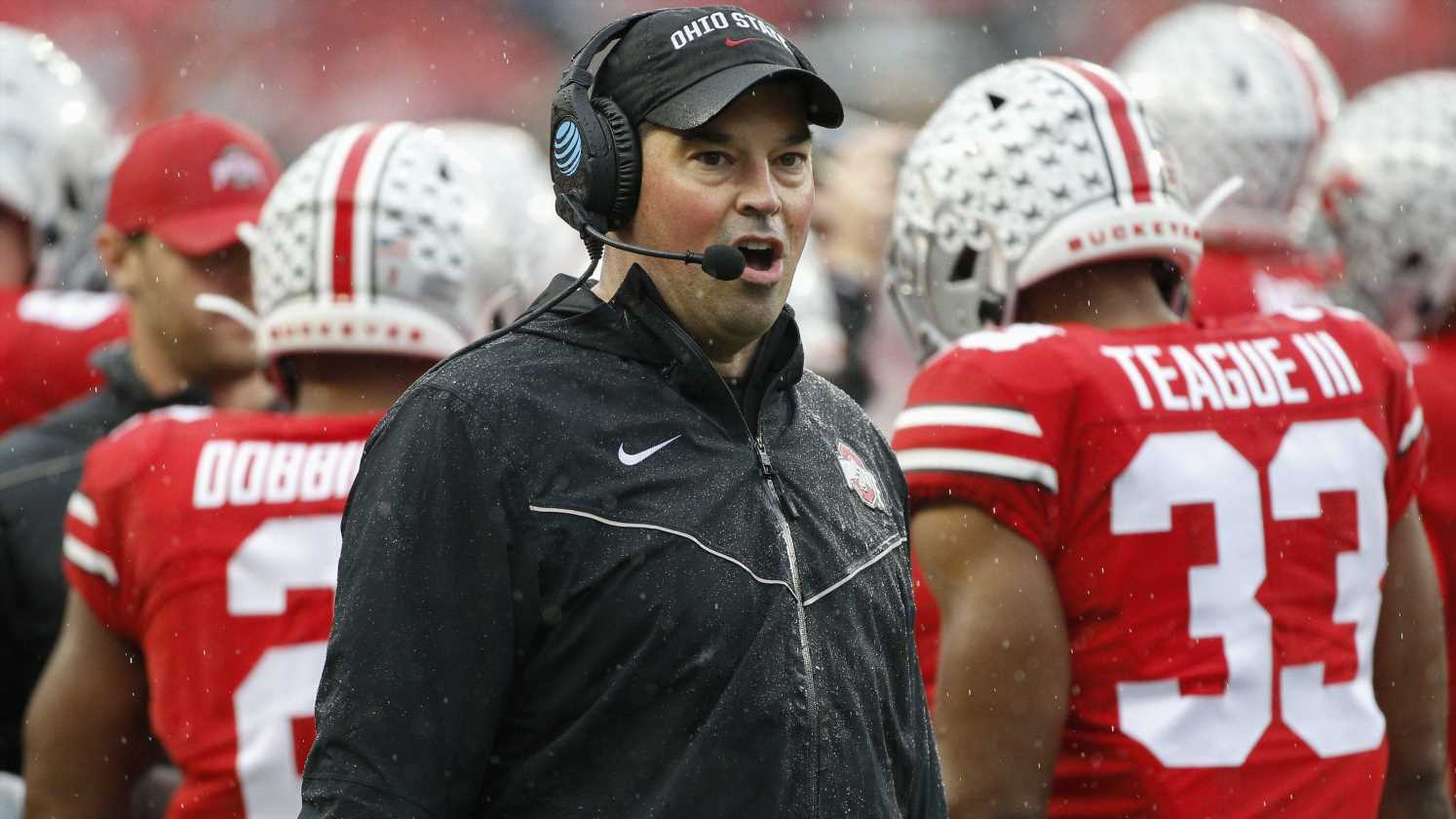 One of the first things people notice about Ryan Day is his cheeks.

They’re rosy red. Sort of like Santa Claus'. And people often wonder the reason for it, especially after his journey to become the head football coach at Ohio State.

“I thought he had the red cheeks because he was always cold,” said Christian Leibl-Cote, a former teammate of Day’s at the University of New Hampshire.

“I didn’t know if he was red-cheeked because he was pissed off or something,” McDonnell told USA TODAY Sports this week. “But it was always there.”

The simpler explanation is that it’s just his complexion. But bigger mysteries still abound about him after he almost seemed to come out of nowhere to start his head coaching career with 23 wins in 24 games as head coach of the Buckeyes. How did Day do that and where did it come from?

Ryan Day has Ohio State in the College Football Playoff championship game in his second full season as the coach of the Buckeyes. (Photo: Joshua A. Bickel, Columbus Dispatch)

To find answers, USA TODAY Sports examined some of the big moments that helped color the rest of his rising profile as he prepares to lead Ohio State (7-0) against No. 1 Alabama in the College Football Playoff championship game Monday. His team beat No. 2 Clemson in the semifinals on Jan. 1, advancing to the title game in Miami Gardens, Florida, where his family plans to be with him in support.

“This might be a once-in-a-lifetime situation,” Day’s father-in-law, Stan Spirou, told USA TODAY Sports this week. “You don’t know how many times Ryan and the family are going to be in this position.”

Based on his history, Day, 41, still could have more rare moments in store beyond Monday. He seems to have a knack for them.

Miracle of the millennium

It still ranks as one of the craziest comebacks of all time, unseen and unheard of by most college football fans even now. On Nov. 4, 2000, Day was the junior quarterback at New Hampshire and had traveled with his team to play Delaware, then ranked No. 2 in the Football Championship Subdivision.

By the time it was over, New Hampshire won in overtime 45-44.

Day threw for a school-record 37 completions in 65 attempts for 426 yards and four touchdowns, including a 53-yarder to future NFL receiver Randal Williams in the final minute of the fourth quarter to help tie the score. “That was because of his play,” Leibl-Cote said of the comeback. “It was unbelievable.”

This flurry epitomized the offense Day operated under New Hampshire offensive coordinator Chip Kelly: fast-paced with no huddle and capable of the inconceivable – a system that Kelly later brought to Oregon and the NFL.

It still took the right kind of presence to engineer such an improbable rally under pressure. That came from somewhere else.

Death of his father

Tragedy struck Day’s family in 1988 when his father, Ray, died by suicide, leaving behind his wife, Lisa, and son Ryan as the oldest of three brothers in Manchester, New Hampshire. He was 9.

“Losing his father at that age and being responsible for two young brothers – Ryan grew up a lot faster and had certain responsibilities,” said Spirou, who knew Day since his childhood. “He acted more mature than most kids. … You could just see it in the backyard.”

That’s where he’d play basketball and organize the teams, including his brothers and neighbors. His competitiveness and leadership skills at that age later showed in other youth sports, too, especially baseball. In the Babe Ruth League at age 13, he chose a certain position for a reason.

After his father’s death, Day's grandfather, Paul McGaunn, helped fill the void. He died in 2019 at 85. Spirou also served as Day’s mentor and retired in 2018 after 33 years as basketball coach at Southern New Hampshire University.

Day ended up marrying Spirou’s daughter, Nina, and the couple now have two young daughters and a son. In 2019, the Days announced they had joined a movement that supports youth mental health at Nationwide Children’s Hospital in Columbus. Day cited the death of his father as a reason for his commitment to help “break stigmas” associated with mental health issues.

The couple established a fund at the hospital to help the cause. After his father’s death, others had supported his development, preparing him for life after college, when two key connections helped him blast into the elite level of college football.

If Kelly hadn’t been a coach at New Hampshire back then, Day’s future could have taken a much different route. The same goes for the time when Day crossed paths with head coach Urban Meyer in 2005.

After tutoring him as a player, Kelly helped Day land three key jobs: his first coaching job, in 2002, as New Hampshire’s tight ends coach, followed by stints as quarterbacks coach of the NFL’s Philadelphia Eagles (2015) and San Francisco 49ers (2016) under Kelly as head coach.

The first job came right after his playing career ended. One of his first pupils was Leibl-Cote, a tight end  whom Day helped convert to a new position: left tackle.

“We had the two smartest offensive minds that there is at that time,” Leibl-Cote said of Kelly and Day. “You understood the game better than anybody after having Ryan there, the way he explained it, how to read the defenses and so on. The way he explains things is just … he talks to everybody differently in a way to make sure that you all understand.”

After spending the next two seasons as a graduate assistant at Boston College, Day also benefited from another connection to his home state in 2005 – Dan Mullen. Meyer had just been hired as head coach of Florida and had brought offensive coordinator Mullen with him from his previous job at Utah.

Mullen, now Florida’s head coach, had learned about Day through O’Neil, a coach who had worked with Mullen and Day during their upbringings in Manchester.

“Ryan was coming up through the ranks, and I just remember saying to Dan, ‘Hey, if you ever got anything' " in terms of job opportunities, he should consider Day, O’Neil said.

At the time, Mullen didn’t really know Day, who is seven years younger. But Mullen helped bring Day on the Florida staff as a graduate assistant under Meyer, who later hired Day at Ohio State as an assistant coach in early 2017 – right after Day’s season with the 49ers under Kelly. Day then succeeded Meyer as Buckeyes head coach after the 2018 season, when Meyer retired.

“He’s been with people who put him in the position to be successful, but he also has been in a position to really learn from those people,” said McDonnell, the head coach at New Hampshire since 1999.

In August 2018, Ohio State promoted Day to interim head coach after Meyer was suspended for three games because of his mishandling of domestic violence allegations against one of his other assistant coaches.

Kelly sent Day a text message at the time: “You’re built for this.”

He was right. The Buckeyes went 3-0 to start the season under Day and averaged 56 points a game.

“I was very surprised,” Day said then. “It did catch me off-guard.”

Athletics director Gene Smith viewed his upside as worth the investment compared to the risk of his inexperience. If Day hadn’t received this opportunity, he might not be where he is now.

“He proved to everybody that he was ready to coach as a head coach at this level,” McDonnell said.

It was a culmination of connections, experience, skill and brainpower, along with the players brought in by Meyer. The Buckeyes under Day went 13-1  in 2019 with a loss to Clemson in the College Football Playoff, then 7-0 this  season. Now he’s going against one of the best coaches of all time, Nick Saban,adding to the blur of the past few years.

“I feel like during these past two years, even a little bit more, I just haven’t been able to take a deep breath,” Day said Thursday.

But he’s faced more difficult situations before, which is why this might be another big breakthrough for him. His age and boyish cheeks belie the coach he’s become.

“He always had those rosy cheeks,” Spirou said. “He had self-confidence. He always had a vision … He made the right decisions and went to the right places. As they say, ‘The rest is history.’ ”