For just the second time in the last 70 years, the NFL will hold a game on a Tuesday.

The Tennessee Titans and Buffalo Bills are set to square off in a battle of unbeaten teams. The game had originally been scheduled for Sunday but was postponed in light of the Titans' COVID-19 outbreak, in which 24 players and staff members in total have tested positive since Sept. 24. But with Tennessee returning no positive tests in the last two days, the game is a go.

The matchup will mark the first time since 2010, when the Minnesota Vikings and Philadelphia Eagles played in a game rescheduled due to a blizzard, that the NFL has played on a Tuesday.

The Titans are playing for the first time since their Sept. 27 victory over the Minnesota Vikings. Quarterback Ryan Tannehill could have a severely depleted receiving corps, as wide receivers Corey Davis and Adam Humphries along with tight end MyCole Pruitt remain on the COVID-19 reserve list, while wide receiver A.J. Brown (knee) is questionable after missing the previous two games. The Bills, meanwhile, are aiming for their first 5-0 start since 1991. 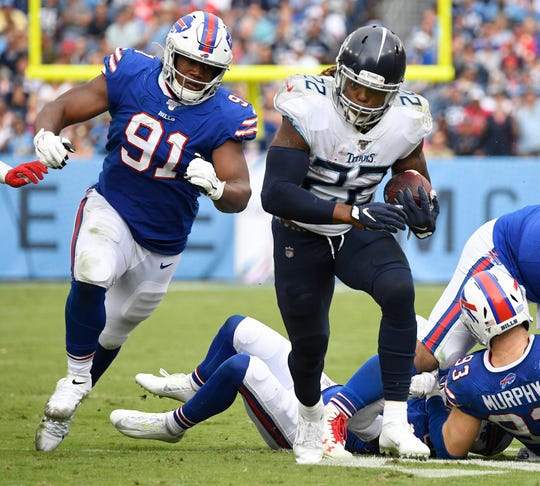 Here's everything you need to know for Tuesday's game:

What time does Bills vs. Titans start?

What TV channel is Bills vs. Titans on?

The game will be aired on CBS.

How can I watch Bills vs. Titans online via live stream?

Fans can watch the game via live stream on CBS All-Access or fuboTV.

What are the odds for Bills vs. Titans?

According to BetMGM, the line is Cowboys -3 and the over/under is at 54.5.

Where can I find score updates for Bills vs. Titans?

USA TODAY Sports will have all the latest on the game in our box scores.

Gannett may earn revenue from audience referrals to betting services. Newsrooms are independent of this relationship and there is no influence on news coverage.

College Football Playoff simulation scenarios: BYU in the semis? Oregon winning it all?