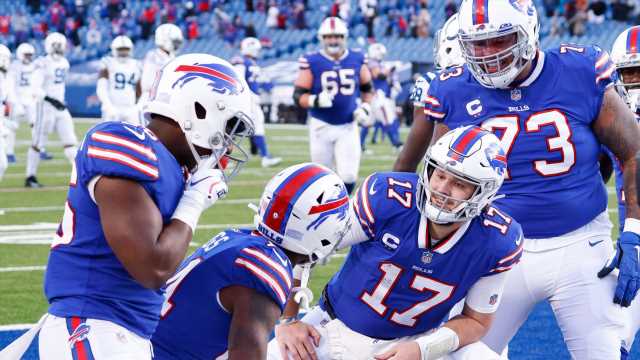 Propelled by the strong arm and fleet feet of quarterback Josh Allen, the Buffalo Bills garnered their first playoff victory since 1995. Exorcising the demons of squandering a playoff lead a season ago, the Allen-led Bills built an advantage and the Buffalo defense made a stand on Saturday to stave off Philip Rivers and the Indianapolis Colts, 27-24, in the Super Wild Card Weekend opener.The second-seeded Bills will host an AFC Divisional Round game next week.

1) Super Wild Card Weekend kicked off with a tense, tight, highly entertaining bout in Buffalo ended with white knuckles as the Bills hung on for their first playoff win and trip to the Divisional Round since 1995. ﻿Josh Allen﻿ put a stamp on his All-Pro season, making dart throw after dart throw to thwart a stellar Colts defense. Allen’s ability to conjure magic, escape pressure and throw from any platform was on display Saturday as he compiled 324 passing yards on 26-of-35 attempts with two TDs. Allen’s patience, taking easy throws against Colts zones kept drives alive. The smart tosses were complemented with big splash plays when he had time. Allen went 5-of-6 with a TD on passes beyond 20-plus air-yards. The QB’s performance was a continuation of what we’d seen all season from the young star. Allen combines a rocket arm, can flick throws easily all over the field, and run through opponents (leading the Bills on the ground with 54 yards on 11 totes and a TD). His lone mistake at the end of the game came with a fumble as the Bills were trying to milk the clock. Luckily Buffalo recovered and held on, or it would have been another heartbreaker for Allen in the playoffs. One big difference this year from last season’s collapse against Houston was Allen had ﻿Stefon Diggs﻿ to go to in key spots. The league’s top receiver sored past a Colts defense designed to slow him. When Allen needed a key play in the second half, there was Diggs swooping in for a big catch. Diggs finished with six catches for 128 yards and a TD. The 35-yard streaking score stretched the Bills’ lead to 14 points early in the fourth quarter and helped enable Buffalo to snap their streak of six playoff losses.

2) The end of the first half changed the complexion of the contest. ﻿Philip Rivers﻿ drove the Colts down to the doorstep late in the second quarter, leading 10-7. Indy had four plays inside the 4-yard-line. On fourth down, Frank Reich opted to go for the TD. Rivers couldn’t connect with a diving ﻿Michael Pittman﻿ in the corner of the end zone. Instead of a 17-7 or 13-7 deficit, Buffalo got its chance to flip the script. Allen connected with rookie WR ﻿Gabriel Davis﻿ on a couple close sideline bombs that were pure magic from the QB. Buffalo drove 91 yards on 10 plays in 1:32 to score the go-ahead TD and take a lead it would never relinquish. Also getting the ball after half, the Bills marched for a field goal. It was a sequence of events that altered the rest of the epic bout.

3) Indy will be kicking itself coming up short in a game in which it moved the ball up and down the field, dominated the clock, and had a chance on the final possession. Outside of the fourth-down miss near the goal line, Indy missed a field goal, struggled to get a second-half stop and botched red zone opportunities. As they have all season, the Colts struggled to punch the ball in the end zone when they had their shot. Indy went 2-of-5 converting red zone chances into TDs. Coming in, Reich’s club wanted to run the ball, control the clock, move the chains and keep Allen on the sidelines. Indy executed that plan expertly through the first three quarters, but an inability to punch the ball in the end zone left the Colts floundering. Between their final drive of the second quarter and opener of the third, the Colts went 115 yards on 22 plays, with six first downs, eating up 11:55. They got zero points on those drives. Rivers played well for much of the bout, helping move the chains and taking his shots when available. A few missed passes — including one well behind Pittman in the third quarter — will have the veteran shaking his head Sunday. There were opportunities for the Colts, who just didn’t take advantage early. When they needed points late, Rivers drove them down the field for two quick fourth-quarter chances. On all nine of their non-kneel possessions, the Colts got into Bills’ territory, putting up 472 yards on 76 plays, but put up just 24 points. Once again, Rivers and Co. came up short with the game on the line.

4) The Bills defense closed the end of the season hot, but struggled to pressure Rivers all game Saturday. The lack of a pass rush allowed the Colts to convert 9-of-17 third downs on the day and average of 6.2 yards per play while very nearly giving up 500 yards of offense. Buffalo slowed ﻿T.Y. Hilton﻿, but struggled with Pittman’s ability after the catch. Tight end ﻿Jack Doyle﻿ (7/70/1) thrashed Bills defenders over the middle all game. Saturday looked closer to what we’d seen earlier in the season from Sean McDermott’s defense before it came on strong down the stretch. On the plus side, the Bills bowed up when needed in the red zone and near the goal line. ﻿Tre'Davious White﻿ had a massive PBU on the final possession, and the Buffalo defense closed it out in the end. It’ll have to be better next week, however. Luckily, the Bills owned the better offense and special teams to bail out the bend-but-not-break defense. Kicker ﻿Tyler Bass﻿ was huge, converting two field goals, including a colossal 54-yarder that ended up the difference in the game.

5) The Colts rode rookies Jonathan Taylor and Pittman Saturday. Taylor carried the load in the backfield once again, generating 78 yards on 21 carries with a score. The running back’s ability to shed tackles and churn out yards controlled the pace of the game early. Pittman led the Colts with five reception for 90 yards. Combined, the two first-year players went for 185 yards and were particularly potent early in the contest. The rookie duo underscores the promise for Indy moving into 2021. The Colts have the pieces to be a staple in January for years to come. The biggest question is the future under center. Will the Colts bring back Rivers for another run? The QB certainly can still play if the sides desire to re-up. Or will Indy decide to test less-aged waters long-term moving forward to pair with their talented young core?