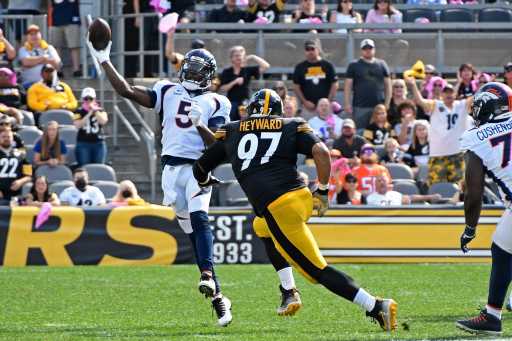 PITTSBURGH — The Broncos are officially Team Wait Too Long. They wait until the fourth quarter to show a pulse offensively and semi-bow up defensively. And they paid the price Sunday for their sleep-walking ways.

But the Broncos couldn’t punch it in on two plays apiece from the Steelers’ 9- and 3-yard lines in the final minute, the last snap a fourth-down interception thrown by Bridgewater in the end zone.

A game the Broncos didn’t deserve to win, absolutely.

“Just have to be better,” said Bridgewater, who was looking for receiver Courtland Sutton on the final play. “Starting faster, we’ve been preaching that the last couple of weeks, and it finally caught up to us.”

And now the ‘L’ column of the Broncos’ record is catching up on the ‘W’ column.

“It was all-around (disappointing),” outside linebacker Von Miller said. “We got outplayed.”

The Broncos are reeling, having squandered 66% of their 3-0 start and every part of their game is concerning.

They started badly on offense — no first downs in the first quarter.

“We didn’t move the ball very well at all until late so obviously it’s a concern,” coach Vic Fangio said.

Said Bridgewater: “We can’t wait until the game is out of hand to have a sense of urgency.”

They started badly on defense — the Steelers scored on three first-half drives.

“We didn’t play well enough on defense,” Fangio said. “When you go on the road and give up 27 points, you’re not going to win many games.”

The Broncos are 2-6 in such road games under Fangio.

This isn’t a flip-the-switch-within-a-game league. It may happen once or twice when a team finds lightning in the halftime locker room to pull a victory rabbit out of their hat.

But not on the road (even against a 1-3 Steelers team) and certainly not if you’re the Broncos.

Part of that is based on attrition. The only positive from the Steelers game is a Broncos Monday Talking Point won’t be injuries for the sixth consecutive week … at least we think so.

The primary problem is not following their stated modus operandi. Play lights-out defense and trust/hope/believe the young players on offense will thrive under Bridgewater’s stewardship.

Against inferior teams and young quarterbacks, that worked — only two non-garbage time touchdowns allowed and a sap-the-clock offense during a 3-0 start.

The Steelers’ offensive line handled the Broncos, allowing rookie running back Najee Harris to rush 22 times for 123 yards. Pittsburgh entered with the NFL’s worst running game in yards per game (55.3) and per carry (3.3). It gained 147 yards and averaged 4.2 against the Broncos.

“They blocked us good, (Harris) ran it good and we didn’t play the run well enough,” Fangio said.

The other thing Pittsburgh did well was stretch the field with the arm of embattled quarterback Ben Roethlisberger. A 50-yard touchdown to Diontae Johnson to open the scoring and a 59-yard completion to Chase Claypool set up another score.

The vaunted Broncos secondary is leaking figurative oil. Through five games, rookie Pat Surtain II has the only interception among the cornerbacks. Ronald Darby missed his fourth consecutive game (hamstring) and Kyle Fuller was picked on for the opening touchdown.

“Their big emphasis, they were saying throughout the week, was taking their shots and we had to step up,” Simmons said.

The Steelers built a 17-6 halftime lead as the Broncos’ offense couldn’t get out of their own way. Even after a terrific play, rookie Javonte Williams’ 49-yard carry, it was married by his delay of game penalty for spiking the football that cost the Broncos a first-and-goal at the 2. They settled for a field goal.

The deficit swelled to 24-6 with 2:41 left in the third quarter on Claypool’s 18-yard touchdown catch, which came four plays after inside linebacker Alexander Johnson’s second dropped interception and three plays after Dre’Mont Jones’ leverage penalty on a Steelers field goal.

Only then did the Broncos’ offense awaken.

Following a Steelers four-and-punt, the Broncos used the big strike — Bridgewater to Sutton for 39 yards — to cut the lead to 24-19 with 5:46 remaining.

Minus a timeout save for the two-minute warning, the Broncos moved from their 25 to the Steelers’ 9 on five completions. Their final play was Bridgewater’s first interception when he tried to fit a throw to Sutton.

“We (need) have some energy,” Bridgewater said of the slow starts. “We’ll figure it out this week. We have no choice. We still have so much in front of us.”