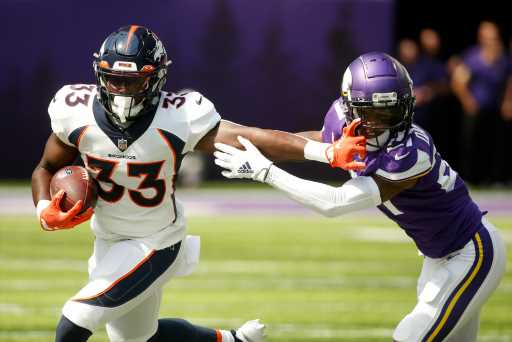 As soon as he was asked about Broncos rookie running back Javonte Williams last week, a smile creased quarterback Teddy Bridgewater’s face, followed by a pause.

It was as if Bridgewater was thinking, “Should I compare this kid to a former teammate?”

Yep, he thought it was appropriate.

“I don’t want to make it seem like I’m reaching or anything, but he possesses some of the qualities you see in Alvin Kamara,” Bridgewater said.

High praise because Kamara has 58 touchdowns and an average of 6.2 yards per offensive touch in four years for New Orleans, where Bridgewater was a teammate in 2018-19.

But handling out compliments to Williams has become common around these parts. It started the night he was drafted and continued after he participated in organized team activities, put on pads in training camp and played in preseason games against Minnesota and Seattle last month.

Just 21 years old and set to make his NFL debut Sunday against the New York Giants, Williams has achieved a rarity: All-aspects confidence.

“He’s earned that trust and we’re not at all against playing him in any situation at any time in the game,” coach Vic Fangio said.

Williams rushed 12 times for 49 yards in the preseason. He showed enough that he was a healthy scratch against the Los Angeles Rams on Aug. 28, and exhibited a comfort level in practice as a receiver and pass protector.

Translation: Melvin Gordon may start against the Giants, but Williams is at an all-systems-go level.

“He’s a guy who’s extremely smart, he catches the ball well out of the backfield, he runs good routes, he has a low center of gravity, he’s strong and he knows how to set up blocks,” Bridgewater said. “You see that in a guy like who’s only a rookie, his ceiling is so high.”

Not just power back

His judgment on Williams was immediate.

“It’s unbelievable how under-recruited Javonte was out of high school,” Longo said in a phone interview.  “I just thought he was a really intriguing back in our room because I thought he was pretty diverse with what he could do.”

The average per carry (7.3 yards last year, 6.3 for his career) and touchdown totals (33 rushing/receiving) are eye-popping and, dare we say, Kamara-like.

“It’s not accurate if you were to classify him as just a power back because he’s a hard guy to catch in the open field,” Longo said. “I don’t know if he’ll outrun everybody in the NFL, but he has legitimate speed and I’d say many of his yards were a result of him giving you a move and then running by you more than it was putting his shoulder down and putting you on your back.”

Splitting the labor with Michael Carter (a fourth-round pick by the New York Jets) should help Williams acclimate to the NFL, where he will share carries initially with Gordon.

Modkins said it was useful to be around Williams, “personally and get a sense for what kind of kid he was. The ‘a-ha’ moment was on tape. It may be a four-yard run, but there were things he showed that he understood football and how to set up blocks.”

Modkins, who watched every one of Williams’ 2020 snaps prior to the draft, arrived at his second-floor office on the morning of April 30 hoping Williams would be available when the Broncos selected 41st.

During the first round of the draft, running backs Najee Harris (Pittsburgh) and Travis Etienne (Jacksonville) went Nos. 23-24. The Broncos started the second round at No. 41, but felt Williams wouldn’t last that long.

In his first draft weekend trade, general manager George Paton flipped second- and fourth-round picks (No. 114) to Atlanta for Nos. 35 and 219 (sixth round). Williams was in the fold.

Astute thinking for two reasons: The Broncos believed Williams was the draft’s best tailback, which meant he was worth moving up to select. And the fall-off at the position was significant — the next back didn’t go until No. 88 (Trey Sermon to San Francisco).

“This league is about players and to get a guy like Javonte with his high character and everything else that is off the charts (is great), and then the tape says he’s a really good football player so the person and athlete matches,” Modkins said.

The Broncos view Williams as the perfect complement to veteran Melvin Gordon this year and should see him as the no-doubt No. 1 guy next year.

Was No. 35 too high to draft a running back? No way. For all the talk about devaluing tailbacks and finding ones late in the draft or afterward, the 2020 leaderboard semi-debunks that theory.

A breakdown of last year’s top 25 tailbacks in rushing: First round (four), second round (seven), third round (nine) and fourth round or later (five). Among the group, Gordon was one of four backs drafted in in rounds 1-3 that were on their second team. Rushing champion Derrick Henry of Tennessee was a second-round selection, same for Minnesota’s Dalvin Cook (second), Indianapolis’ Jonathan Taylor (third) and Cleveland’s Nick Chubb (seventh).

“It’s exciting because you know you’ll have an opportunity to work with a good person who wants to be good,” Modkins said.

Williams showed great signs in the preseason. On the Broncos’ first two snaps at Minnesota, he lined up in the I-formation with two-tight end personnel. First play: He started right, but then cut back left (aided by blocks from tight end Eric Saubert and center Lloyd Cushenberry) for a gain of 11 yards. Second play: Again the “I,” he bounced the play to the right edge and stiff-armed cornerback Cameron Dantzler to the turf to gain 13 yards.

The Broncos’ history of rookie tailbacks is illustrious. Mike Anderson (2000) and Clinton Portis (2002) both finished fourth in rushing yards (1,487 and 1,508, respectively) and Phillip Lindsay (1,307) got a Pro Bowl nod. Teaming with Gordon may keep Williams from getting near those totals, but the expectation is he’ll make an instant impact.

“I was spoiled — Javonte may be the most well-rounded guy I’ve ever coached,” Longo said. “When he was on the field, I could call the full offense. Whatever you need him to do, Javonte can do it.”

Since 2000, the Broncos have been led in rushing by six rookie tailbacks: