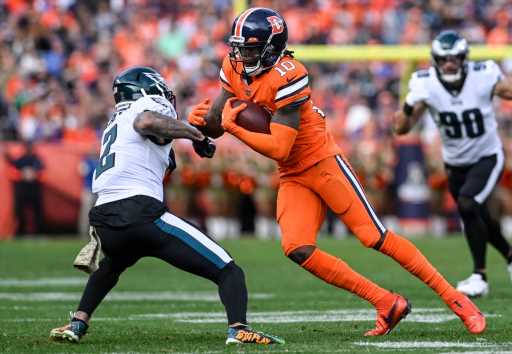 Is there a reason the Broncos did not pick up one undrafted college player following the draft? If memory serves me correct, the team has always found a gem that makes the final roster.

The Broncos’ wont is to not announce any undrafted free agent additions until they’re in the building for rookie camp, pass their physical and sign their contracts.

We’re not a fan of this process — other teams were announcing undrafted rookies on the night of the draft. Let these kids enjoy the publicity during the two weeks between agreeing to terms and getting to the Denver area. Alas, I’ll keep working on it.

Because of their colleges or agents announcing the moves, I narrowed down on 13 undrafted free agents who will sign later this week.

Ryan, how’s the running back situation looking? Last year, Melvin Gordon and Javonte Williams split carries. Is it going to be more of the same this year or are we getting a clear No. 1 back?

Agree or disagree with the decision to bring back Gordon, the Broncos are set with their Nos. 1-2 tailbacks and it should be 1. Williams and 2. Gordon. Last year, they each had 203 carries, but Gordon started every game he was active. That should change this year.

Williams should take the first offensive series and maybe the second to see if he can get into an early-game rhythm. Gordon could be looked at as the primary third-down back — at least that’s what his contract suggests, awarding him incentives for receiving statistics in addition to team wins.

Chad Johnson said Jerry Jeudy is going to break out for 1,500 yards and 10 touchdowns. That would be amazing if it happens, but what do you think are realistic numbers for Jeudy this year?

The football is going to be passed around to the Broncos’ skill-position talent this year so 1,500 yards and 10 touchdowns is a lofty goal for Jeudy, but if he gets to 1,200 yards and eight touchdowns, he will have taken a giant leap in Year 3.

What’s next for the Broncos to work on? I liked that they picked up tight end Greg Dulcich and edge rusher Nik Bonitto in the draft, but it feels like we could use more depth on the O-line (Russell Wilson is no good if he gets clobbered all the time) and maybe get another inside linebacker or two. Can we still afford to sign Alexander Johnson to a new contract?

Yes, they checked important boxes at edge rusher and tight end by drafting Bonitto and Dulcich in rounds 2-3. And yes, I was expecting them to do more with their offensive line and inside linebacker depth.

The Broncos didn’t draft a right tackle or an inside linebacker, leaving Billy Turner and Calvin Anderson to compete at right tackle and Alex Singleton as the inside-track favorite to start alongside Josey Jewell at linebacker.

I have a feeling I will need extra sheets of notebook paper during training camp to keep track of all the offensive line combinations.

Which team is going to be the biggest surprise this coming season? Is there any team that’s way under the radar in your opinion?

Can the Broncos fly under the radar despite trading for quarterback Russell Wilson? I think so because I envision most of the preseason magazines picking the Broncos third in the AFC West behind Kansas City and the Chargers.

Other teams who could be much improved after not making the playoffs last year: Indianapolis (upgrade with quarterback Matt Ryan), the Chargers (lost in Week 18 last year to not qualify and have loaded up on defense) and Cleveland (if quarterback Deshaun Watson doesn’t miss half the season).

The NFC is much clearer: New Orleans and Minnesota were the first two teams out of the playoffs last year and they have new coaches.