A weekend in the wild world of college football can be expected to produce shocking disappointments and better-than-expected performances in conferences throughout the country.

The unpredictable results are especially routine late in the season where teams are playing with the most pressure or have nothing to lose. However, guessing when and where they will happen is difficult even if everyone knows they are coming, .

The Group of Five’s outside hope of crashing the College Football Playoff party will take a big hit when Central Florida beats No. 7 Cincinnati. The Bearcats has been stellar on defense this year (third in scoring defense and 10th overall), but they haven’t seen an offense like the Knights. UCF is No. 1 in the country in total offense, putting up over 600 yards per game – the only school in the country to clear that plateau – through their seven contests. The Knights have largely fallen off the radar since losing back-to-back games to Tulsa and Memphis, but led by QB Dillon Gabriel this is still a plenty formidable squad in the American Athletic, especially at the Bounce House. 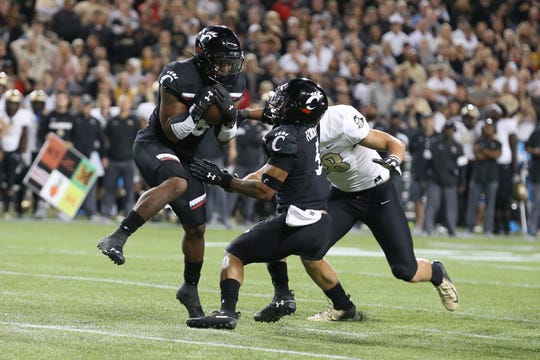 Liberty outscores North Carolina State in another shootout against an ACC opponent to remain unbeaten heading into the final two games of the regular season. This would be the Flames’ third win against the ACC this season, joining Syracuse and Virginia Tech. The win should make coach Hugh Freeze an even more appealing target for programs potentially in the market for a new coach this offseason. It could also put a brighter spotlight on quarterback Malik Willis, who is having a fantastic season.

WHAT TO WATCH: Five games in Week 12 with the biggest playoff impact

LOOKING AHEAD: Five biggest questions for Week 12 in college football

Wisconsin has won only once in six tries this century at Northwestern and now travels to Evanston, Illinois, for a matchup of two unbeaten teams with the two best defenses in the Big Ten. Wisconsin passer Graham Mertz meets his match this time, facing a Wildcats squad that ranks third nationally in pass efficiency defense, right behind Wisconsin’s, which ranks second. The difference is Northwestern safety Brandon Joseph, a redshirt freshman with three interceptions this year. The Wildcats throw some purple shade on the playoff picture and take command of the Big Ten West.

It would a bold, bold prediction to pick Indiana to win at Ohio State. But make no mistake, this is going to be a tougher game than one might presume based on the preseason perceptions of the programs. The Hoosiers have outplayed Michigan and Michigan State in overwhelming fashion the past two weeks. One can discount their success, but do so at your own peril. Michael Penix Jr. is a talented quarterback that can make plays with both is arm and his feet and has talented receivers as options. Stevie Scott III is a tough, physical runner. Indiana is going to move the ball. The question is how well its top 20 defense can slow down Justin Fields and the Buckeyes. They'll do enough through three quarters to make it close. Don't be surprised if it comes down to one possession.

Remember Trevor Lawrence? It’s been nearly a month since we’ve seen him in action, and he’s about to remind us what we’ve been missing.

The Clemson quarterback was the preemptive Heisman favorite heading into the season and is still the presumptive No. 1 pick in the upcoming NFL draft. But thanks to a positive coronavirus test he hasn’t played since the Tigers’ Oct. 24 win against Syracuse. While his understudy D.J. Uiagalelei acquitted himself well in Lawrence’s absence, it’s equally true that those two games resulted in a come-from-behind win against Boston College and a double-OT loss at Notre Dame.

Now after a scheduled open date for the Tigers, Lawrence will finally get back on the field. His victims – er – opponents will be the Florida State Seminoles, whose pass defense ranks 104th in the country. Look for Lawrence to throw for at least 350 yards and four scores as he vaults back into the Heisman race.

If you like old school Big Ten football, Wisconsin-Northwestern is going to be right up your alley. Though the statistics this season are not necessarily apples-to-apples due to differences in number of games played, Wisconsin is No. 1 in the country in total defense at 218.5 yards per game and Northwestern is No. 10 at 301.8. But perhaps the most impressive stat for either team is Northwestern's eight interceptions through four games. Graham Mertz, the Badgers' freshman quarterback, is yet to throw a pick in either game he's started. But going up against Illinois and Michigan isn't at all representative of what he'll face with the Northwestern pressure and coverage scheme. Pat Fitzgerald is going to try to create some havoc for the freshman and confuse him, and the bet here is that it baits him into a couple key mistakes. Northwestern pulls an upset at home in a low-scoring game.