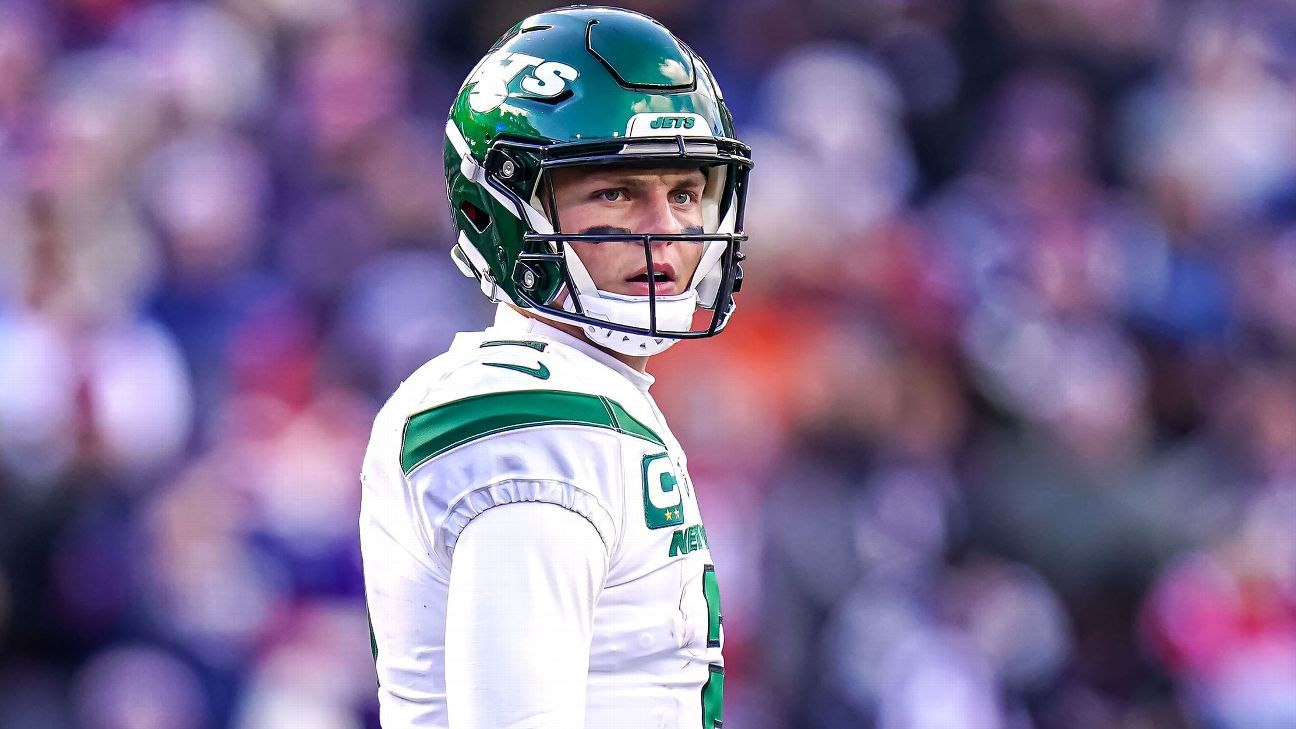 FLORHAM PARK, N.J. — On the day he lost his starting job in a dramatic quarterback shake-up, Zach Wilson tried to win back his New York Jets’ teammates with an apology.

Under heavy criticism from fans and media, Wilson spoke to the entire team on Wednesday, admitting he botched Sunday’s postgame news conference — the one in which he refused to take accountability for his poor performance in a loss to the New England Patriots.

“I had a sick feeling in my stomach,” he said.

That game, combined with what coach Robert Saleh called a deterioration of basic fundamentals, led to Wilson’s benching. Mike White will start Sunday against the Chicago Bears at MetLife Stadium. Joe Flacco will be the No. 2 quarterback; Wilson will be inactive.

Wilson, acknowledging his poor play and didn’t question Saleh’s decision. Speaking to the team, he expressed support for White, but also vowed to win his job back, players said. He wanted to clear the air with teammates, some of whom were upset by his postgame comments, sources said.

“It was the only thing I could think of the last couple of days,” Wilson said. “I wanted the opportunity to talk to those guys and really make it from the heart.”

Wilson’s benching was a significant pivot for an organization that had geared almost everything around him since drafting him second overall in 2021. It raises questions about the future of their quarterback position, a proposition the Jets never thought they’d have to confront so soon.

Explaining the decision, Saleh said Wilson’s fundamentals are “really out of whack” and that he needs time to refocus. He has “every intent” of playing Wilson again this season, insisting they “haven’t wavered in our belief that he’s going to be the future of the franchise.” Saleh described the demotion as a temporary reset.

“Is it a small step back? Absolutely,” Saleh said. “But do I think it’s going to be a great leap forward when he gets a chance to reset himself? Absolutely. So, this is not putting a nail in his coffin. This is not that. This is not close to that. But I do believe, at the end of this, it’s going to be a rejuvenated, renewed young man.” Understandably, Wilson wasn’t happy with the decision, with Saleh describing his reaction as, “Why me? Why now? I want to play.”

“It’s tough, man. It’s never fun,” Wilson told reporters. “The first thing that went through my mind is I have to get to work, I have to get better.” It didn’t come as a shock.

“You know what? I wouldn’t say (I was) necessarily surprised because I haven’t been doing my job,” he said. “Of course, I would like to not agree with the decision and everything, but it comes down to I have to play better.”

Saleh declined to put a timetable on Wilson’s return, saying he will take it “day-to-day.” This, of course, opens the door to a potential quarterback controversy if White is successful.

The Jets (6-4), hoping to end their 11-year playoff drought, have shifted into a win-now mode. They believe their defense is championship caliber, and they don’t want to waste this opportunity because of erratic quarterback play.

They’re 5-2 since Wilson returned from a preseason knee injury, but his play has been wildly inconsistent — a two-year trend. With a 37.6 Total QBR, he’s ranked 31st out of 33 qualified passers over the last two seasons. He hit bottom with a career-low 77 passing yards in last Sunday’s 10-3 loss to the Patriots.

Wilson was called out by coaches in Monday’s team meeting, sources said, leading some to believe his ouster was inevitable. Saleh claimed Wilson’s postgame comments weren’t a factor in his decision. Wilson said he had no idea he had caused a stir until his father reached out by phone and asked, “Bro, what are you doing?”

“Everything he said came from the heart,” he said. “It was very genuine an everybody respected it.”

Only three weeks ago, Wilson received a strong vote of confidence from Saleh, who said Wilson would start for the remainder of the season, barring injury. What changed?

“There are some basic fundamental things have gotten really out of whack for him,” Saleh said. “This is just an opportunity for him to sit back, focus on those things and find a way to re-connect with all the different things we fell in love with during the draft process. It’s something I feel like he’ll be able to do.”

Saleh said there are “just a few things in his game right now … that will just continue to deteriorate if we just keep throwing him out there.” They devised a practice plan that will allow him to focus on those fundamentals. Saleh said the issues are “fixable.”

Statistically, Wilson is historically bad when throwing under pressure. He has a tendency to look at the pass rush instead of downfield, often resulting in throws off his back foot. Offensive coordinator Mike LaFleur acknowledged that footwork is an issue.

“I have to find a way to get him to play fundamentally sound in the lower half,” LaFleur said.

White is hardly a sure thing; he has only three career starts.

With Wilson nursing a knee injury last season, White achieved near-cult hero status in his first career start, throwing for 405 yards and three touchdowns in upsetting the Cincinnati Bengals. The former Dallas Cowboys draft pick got two more starts — an incomplete game against the Indianapolis Colts (he left with an injury) and a four-interception clunker against the Buffalo Bills.

White actually began this season as the No. 3 quarterback, behind Wilson and Flacco. They changed the depth chart in Week 8, promoting White to QB2 — a switch that left some around the team scratching their heads. Saleh said it was to “allow him the opportunity to prepare as if he is the next man up.”

And now he is.

“Initially, just excited,” White said of his reaction to the promotion. “It’s just what every player in this locker room wants, a chance to compete and prove themselves. But more importantly, it’s just a chance to be a good teammate and help the team and worry about the team first.”