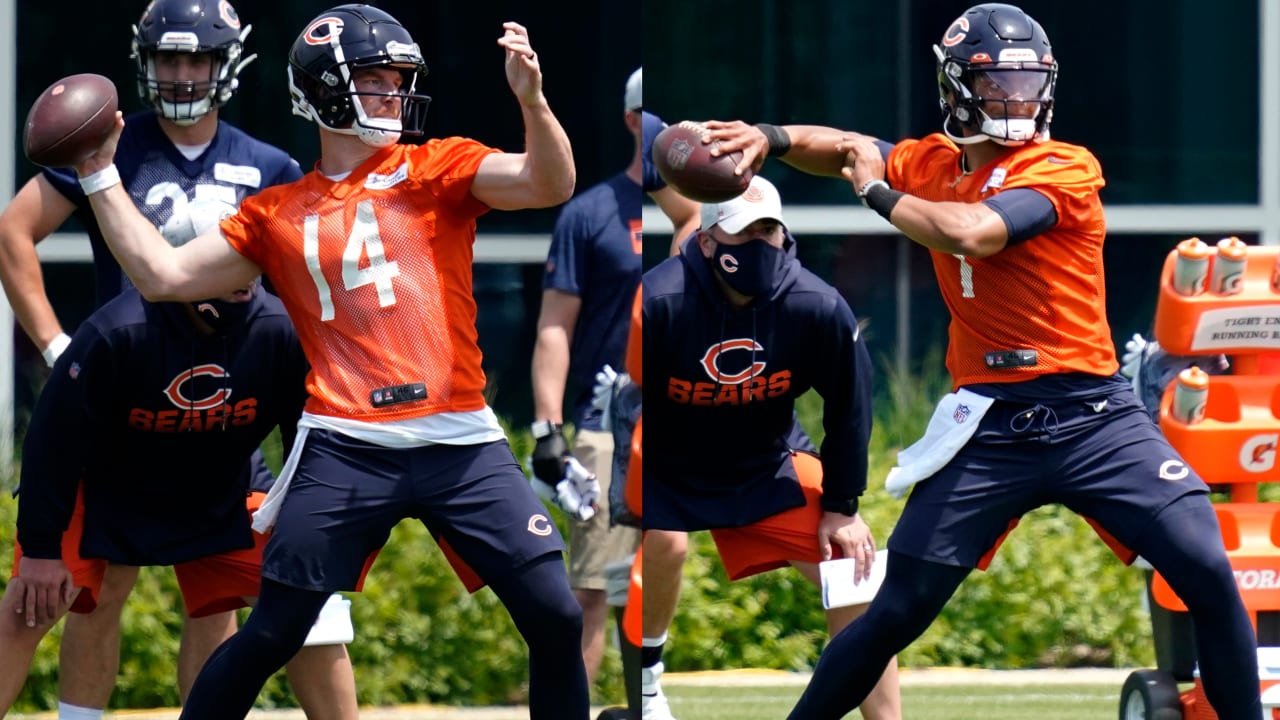 Though the Chicago Bears did not begin in their attempts to trade up for Ohio State quarterback ﻿Justin Fields﻿ until the first day of the 2021 NFL Draft, ﻿Andy Dalton﻿ was well aware of the situation he was in.

Having signed for just one season with the Bears in March, Dalton knew the state of affairs at hand was that he was coming in to start for 2021 and beyond that was a mystery to be solved only by time. Thus, when Chicago made the big move up to the No. 11 spot to select its franchise QB of the future in Fields, Dalton’s approach and focus remained unaltered.

“I knew the situation I was going into regardless of if they drafted somebody or they didn’t,” Dalton said Wednesday. “I was on a one-year deal and I was going to be the starter. So, my mindset didn’t have to change. I already knew that I’m going to do everything I can to be the best player I can for this team and to help us win a lot of football games. And that’s been my goal since the very beginning. Whatever happens after this year, happens. My mindset didn’t change just because they drafted Justin.”

For decades upon decades, the Bears’ seemingly never-ending search has carried on. For the previous two seasons, the writing was on the wall and the frustration was within the fan base that moving on from ﻿Mitchell Trubisky﻿ — and after the 2020 campaign moving on from ﻿Nick Foles﻿, as well — was needed. When the hope of trading for ﻿Russell Wilson﻿ came up empty, the Bears filled the QB vacancy with Dalton.

And then came the the selection of Fields, which caught many by surprise, but Dalton was aware there was a chance a big-time rookie QB was coming to Chi-Town.

“I’ve had a lot of different conversations with everybody here,” the longtime former Bengals starter and 2020 Cowboys backup said. “I know there was a possibility of it. When it happened, it is what it is. Justin’s a great guy, getting to know him in the last couple of weeks, getting to be around him. He’s gonna make the quarterback room better.”

Dalton’s comments about knowing he would start indicate at least at some level he still believes that will be the case for 2021, though head coach Matt Nagy had made it known he’ll have a plan in place on when to debut Fields.

Fields, meanwhile, has made it clear he’ll do everything he can to earn the starting spot, but by all accounts, the young heir apparent and the veteran stopgap are getting along well. More so, Dalton spoke with a smile of Fields and where the rookie’s at and what the veteran has offered up to him.

“I think right now for him, it’s all new his first time getting an NFL offense,” Dalton said. “I’m trying to give him any advice that I can on certain things. How I view certain plays. What I do with my eyes on certain things. Just different things that come with experience. Obviously, going into Year 11, I’ve had a lot of ball. I think for me, I’m just trying to help him out as much as I can.”

How much ball remains ahead for Dalton — at least in his first season with the Bears — remains to be seen. Wednesday was the Red Rifle’s first chance to speak on the situation that’s dominated Chicago headlines since Fields became the Bears’ new hope. It’s a storyline that will likely continue to command attention until the rookie finally takes the field, but Dalton, despite lending words of wisdom to Fields, is maintaining his focus as, like his rookie teammate, he approaches his first season in Chicago.