Eight NFL players will wear the Australian flag on their helmets as the league takes to the world stage.

More than 200 players, coaches and executives will recognise their heritage by wearing the flag of their nationality over the next two weeks.

Players have the option to wear a decal of the flag of another country on their helmets, alongside the American flag, provided they lived there for at least two years or have a parent or grandparent born there, the NFL said Wednesday. Coaches and executives will wear a pin on their game-day attire.

The Jaguars travel to Philadelphia to face former South Sydney Rabbitohs junior Mailata’s Eagles on Monday (ADST). The first match of the league’s annual international series also takes place in the early hours of Monday (12.30am) when the Minnesota Vikings host the New Orleans Saints at London’s Tottenham Hotspur Stadium. The New York Giants and Green Bay will do battle at the same venue a week later.

Gotsis’ team gets their turn at the end of the month when Denver and Jacksonville travel to Wembley. The series wraps up on November 14 when the Seahawks and Tom Brady’s Tampa Bay Buccaneers will break new ground for the NFL by playing a regular-season game in Germany for the first time at Allianz Arena, the home of Bundesliga powerhouses Bayern Munich. 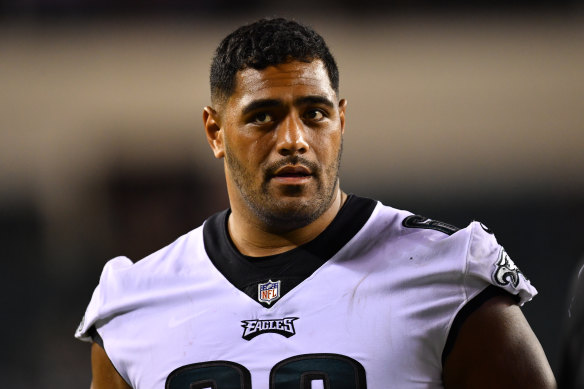 Jordan Mailata will be one of 200 players bearing the flag of their heritage in the NFL.Credit:Getty

“The NFL is proud of the extensive collection of nationalities and heritage of its players across the league,” NFL commissioner Roger Goodell said. “We recognise the many cultures they represent and the excitement they bring to their home fans, which ultimately helps grow our game.”

More than 50 countries and territories will be represented.

“I am proud to represent my heritage with the Samoan flag on my helmet,” Tagovailoa said. “My family and my culture are very important to me. Our name means everything, and it’s an honour to be able to represent not only my family’s name but also my Samoan heritage as an NFL player. I hope that in doing so, I can encourage kids from the islands to keep pursuing their dreams and to also be proud of their culture and where they’ve come from.”

Brothers Amon-Ra and Equimaneous St. Brown – wide receivers for Detroit and Chicago respectively – will wear the flag of Germany.

“My mum is from Germany, so having German grandparents, speaking German, every summer the heritage and culture has been a part of my whole life. I’m half German. It’s a part of me. I love it,” Amon-Ra said. “In my young career, I have already been amazed to see the influence my culture and heritage has had and I’m excited to continue to see the German representation have an impact within our game.”

Bill Belichick of the New England Patriots is among the coaches will wear a flag pin. The six-time Super Bowl winner will celebrate his Croatian heritage.

Watch the NRL Grand Final Exclusive Live and Free on Channel 9 and 9Now.