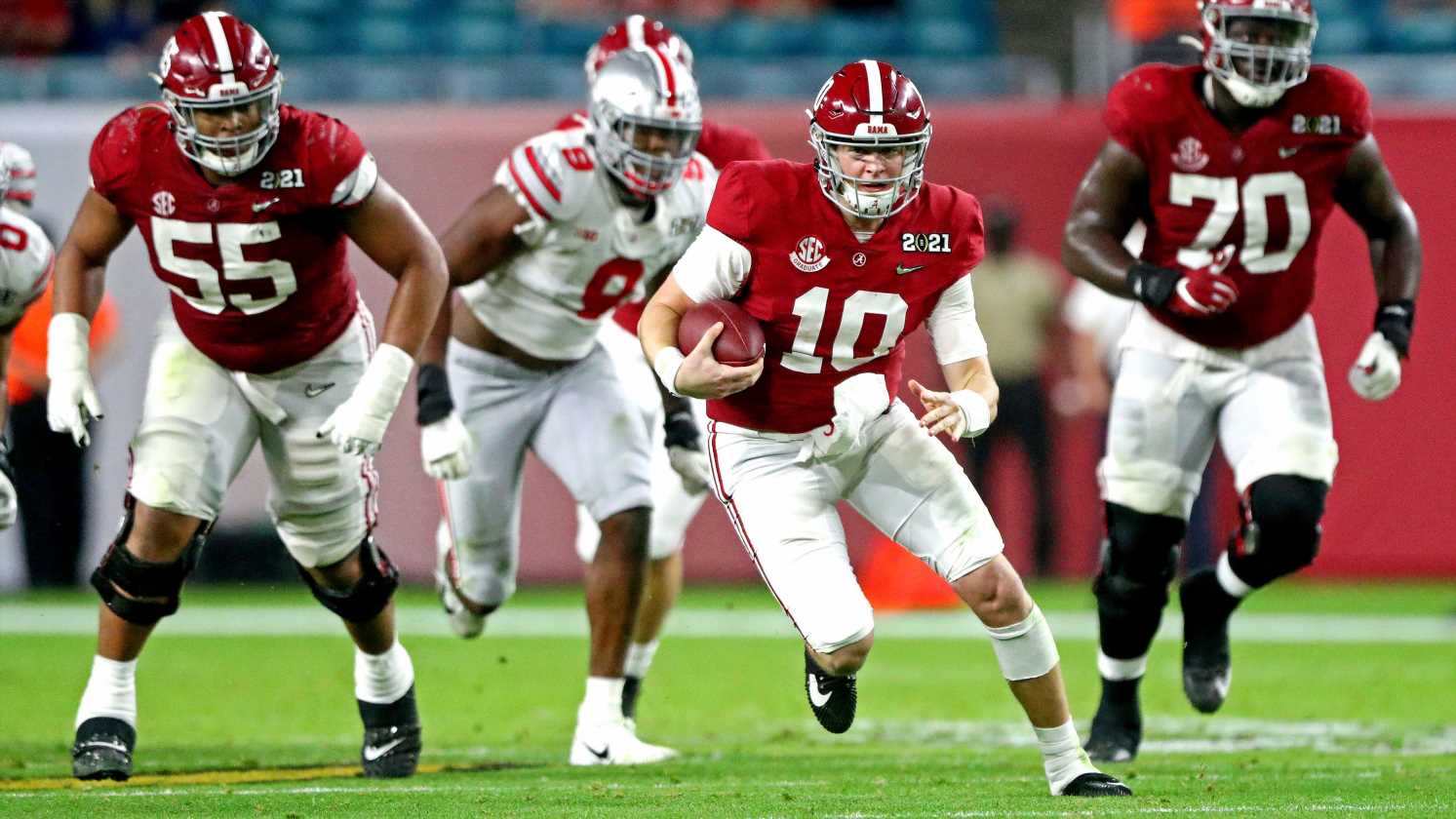 After closing the books on this season with a 52-24 win against Ohio State in the College Football Playoff national championship, Alabama's biggest names are the stars on USA TODAY Sports' 2020-21 all-bowl team.

Quarterback Mac Jones, running back Najee Harris and wide receiver DeVonta Smith were easy picks as the Crimson Tide breezed past Notre Dame and the Buckeyes to claim their sixth title under coach Nick Saban.

The Alabama trio are joined by postseason standouts such as Appalachian State running back Camerun Peoples, who set bowl rushing records; Georgia linebacker Azeez Ojulari, who had an unstoppable game in the Peach Bowl; and Kentucky punter Max Duffy, who controlled field position and helped the Wildcats beat North Carolina State in the Gator Bowl.

REPORT CARD: Season grades for every college football team in 2020

TOO BIG TO FAIL?: How to break up Nick Saban's monopoly at Alabama

Including the playoff championship, there were 26 postseason games during a year when many bowls were canceled due to COVID-19.

Jones threw for nine touchdowns with just 14 incompletions in the two playoff games and set a playoff championship game record with 464 passing yards.

Peoples ran for a bowl-record 317 yards and tied the bowl record with five rushing touchdowns as Appalachian State ripped through North Texas to win the Myrtle Beach Bowl. Harris ran for 125 yards in the semifinals against Notre Dame and then added 79 yards rushing, 79 yards receiving and three touchdowns against the Buckeyes.

Smith played only a half of the championship game but still earned Offensive MVP honors with 12 catches for 215 yards and three scores. With quarterback Justin Fields overshadowed by Jones and running back Trey Sermon injured for almost all of the championship game, Olave represents the Ohio State offense after pulling down 132 receiving yards and two scores against Clemson and leading the Buckeyes with 69 yards against the Crimson Tide. Rex had the best performance of his strong freshman season with 96 receiving yards and two touchdowns as the Cougars beat Central Florida in the Boca Raton Bowl.

As expected, Leatherwood was terrific during Alabama's march to the national championship. Dowdell played every snap of Georgia Southern's 38-3 win in the New Orleans Bowl against Louisiana Tech as the Eagles racked up 322 rushing yards. With Gerak at center, the Wildcats gained 457 yards of offense to beat Auburn in the Citrus Bowl. Hunter had seven knockdowns as the Mountaineers racked up 500 yards on the ground. Swenson was the top-graded performer along an offensive front that chewed up Florida to the tune of 55 points and 684 yards.

Barmore had a sack in each of the Tide's two playoff games and was the Defensive MVP of the championship game. Nichols had two sacks in Nevada's Idaho Potato Bowl win against Tulane. James blocked a Coastal Carolina field goal in overtime to preserve Liberty's 37-34 win in the Cure Bowl and secure the best season in program history. Johnson had six tackles and 1½ sacks as the Aggies held North Carolina to a season-low 2.7 yards per carry in the Orange Bowl.

Ojulari pulled down three sacks and forced a pair of fumbles as Georgia edged past Cincinnati in the Peach Bowl. Vance had four tackles, one tackle for loss and two fumble recoveries in keying the Cyclones' win in the Fiesta Bowl against Oregon. Chandler-Semedo made 13 tackles and the game-clinching interception as WVU shut down Army's vaunted running game to win the Liberty Bowl.

Washington closed an unheralded but very successful redshirt freshman season with three solo tackles and an interception as the Sooners held Kyle Trask to just 156 yards passing. Forbes had a 90-yard interception return for a touchdown as the Bulldogs beat Tulsa 28-26 in the Armed Forces Bowl. Birdsong had two of Georgia Southern's four interceptions in the rout of Louisiana Tech. After earning first-team all-conference honors during the regular season, Cosby made eight solo tackles and an interception to earn Defensive MVP honors in Ball State's Arizona Bowl win against San Jose State.

Podlesny was perfect on his three attempts, including a 53-yard try with seconds left to lift Georgia past Cincinnati. Duffy avoided a potentially game-changing blocked punt in the second quarter and had three key punts in the fourth to preserve Kentucky's bowl win. Robinson closed his freshman season with a bang by running for 183 yards with three touchdowns as the Longhorns destroyed Colorado in the Alamo Bowl.