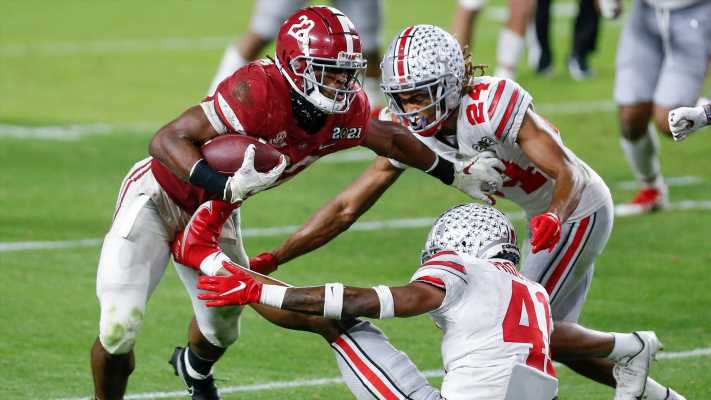 Alabama finishes No. 1 as the only unbeaten team in the Football Bowl Subdivision in the final USA TODAY Sports NCAA Re-Rank 1-127 of the 2020 season after beating Ohio State 52-24 in the College Football Playoff national championship game.

The Buckeyes move up to No. 2 in the final 1-127 with their defeat of Clemson in the Sugar Bowl. The Tigers dropped one spot to No. 3. Texas A&M, Notre Dame, Oklahoma, Georgia, Northwestern, Cincinnati and Iowa State round out the top 10.

The Bearcats, who narrowly lost to Georgia in the Peach Bowl, are one of eight Group of Five teams in the final top 25. Joining Cincinnati are No. 11 Coastal Carolina, No. 12 Louisiana-Lafayette, No. 13 Brigham Young, No. 15 Liberty, No. 22 Ball State, No. 24 San Jose State and No. 25 Army.

Among the Power Five conferences, the ACC, Big 12, Big Ten and SEC each had four teams in the top 25. The Pac-12 only had one, No. 21 Southern California.

LOOKING AHEAD: Alabama, Georgia lead early look at the Top 25 for the 2021

CHANGE NEEDED: How to break up Nick Saban's monopoly at Alabama

EPIC FAIL: With what was at stake, this was bad day for Ohio State defense

With a limited bowl slate due to the coronavirus, there was less movement than usual coming out of the postseason. Some teams did rise based on bowl play: Memphis is up 14 spots to No. 30, Ole Miss is up 15 to No. 36 and Kentucky is up 22 to No. 54. In the other direction, Central Florida falls 15 spots to No. 44 after being blown out by No. 13 Brigham Young in the Boca Raton Bowl.

There was no debate at the top or the bottom of the final re-rank. Coming at No. 127 was Louisiana-Monroe, which failed to lead at any point in any game this season. The lowest-ranked Power Five team was No. 124 Kansas.