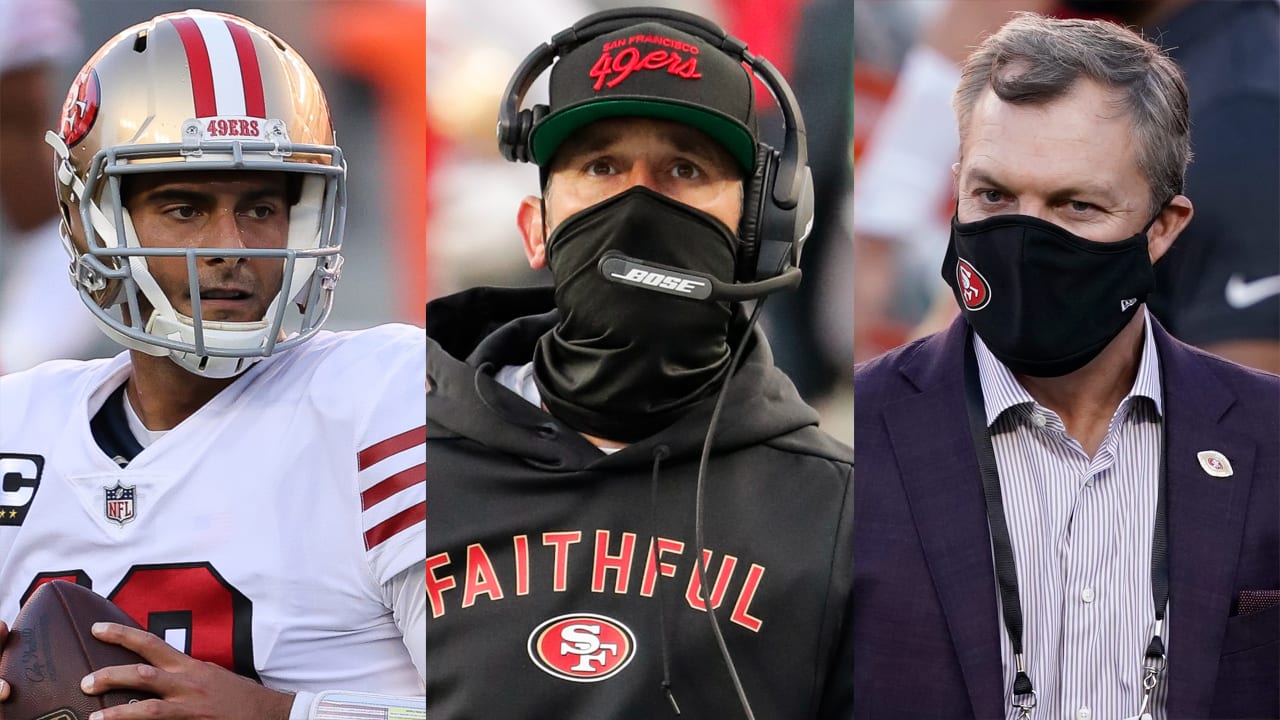 The 49ers, a team that was in the Super Bowl a little over a year ago, moved up from 12th to third in next month’s quarterback-rich draft. With a signal-caller with an unfortunate tendency to suffer significant injuries as their leading man, Lynch and Shanahan had just acquired a mulligan — if they want it.

Based on their collective responses, it seems they very much do and they’re ready to strike.

“It’s a risk every single year you go into an NFL season without one of those top five guys. It’s very tough to win in this league and there’s only a few quarterbacks that you’re going to win because of just the quarterback,” Shanahan explained Monday. “Very few, and even those guys still need a good team around them. So yeah, you’ve got to take risks and this was a risk we were willing to take.

“We looked at how our four years have gone and we looked at how we want the next four years to go and we looked at where we’re at in the draft and the options that are there. And that’s why sitting there looking at this stuff since January and going all the way through the process, we felt pretty strongly we were gonna be left at the altar sitting there at 12. The way that we think this draft is gonna go and the way all these candidates are and the way a lot of teams are in a position trying to take a risk, fill that need that I just said about. Almost every team is in that position except 10 of them. So yeah, it’s a risk. But every season in this league is a risk.”

The risk the 49ers are set to take presumably involves quarterback, a position at which San Francisco has a quality starter in ﻿Jimmy Garoppolo﻿. But after wading through the muddy waters of two seasons spent largely without Garoppolo available due to injury, the 49ers came to the conclusion that they needed a better plan B. And that secondary option very well could become their primary over time, which could be as long as the length of Garoppolo’s remaining contract (which carries almost no financial penalty due to early termination), or as short as later this offseason.

As of now, the 49ers want Garoppolo. There’s no rush to part ways, and while they understand he likely isn’t ecstatic about this development, they expect him to respond to the challenge in a positive manner.

“We went to ownership and said, ‘Hey, things are looking good. We’d like to make this move, but we also don’t want to say goodbye to Jimmy. I think Jimmy, we’ve shown we can get to a Super Bowl with him. We can play at a high level and we don’t think those two things have to be mutually exclusive,'” Lynch said. “So the opportunity to trade up and possibly get a guy that can be a big part of our future and keep Jimmy, who we’re very high on and some positive things are happening this offseason for, that’s kind of the plan we arrived at.

“We’re very excited. It was a stated goal that we needed to come out with the quarterback position being stronger this year and I think we put ourselves in an opportunity to make that happen with this move.”

With the 49ers essentially tipping their hand to a move almost everyone saw coming as soon as the news of the trade broke, we can expect a significant figure to soon be wearing red and gold. That person isn’t guaranteed to see early playing time, especially if the 49ers follow through on their claim of keeping Garoppolo for the immediate future with the goal of contending now. For Shanahan, it’s an ideal scenario, one in which they don’t have to toss an inexperienced youngster into the crucible that is the NFL.

“We’re in a situation where when you bring in a rookie quarterback, to me it’s always better, especially on the team that you have, you’ve got a veteran starter there already who you like and you’re comfortable winning with,” Shanahan said. “That’s usually the direction you want to go and not throw someone else out into the fire until they’re fully ready. That’s the situation we’re at. You look at free agency, it goes the other way around, you do thing differently, maybe. But right now, Jimmy, it’s gonna be hard to find a quarterback that gives us a better chance to win than Jimmy right now, especially even a rookie in the draft. So that’s what you look into.

So the plan, on its surface as of March 29, is draft and develop Garoppolo’s successor, and keep him behind glass in case Garoppolo again goes down. If you’re going to try to replace a quality starter with a hopeful face of a franchise, you want to swing for the highest potential, something the 49ers knew they could only do if they got up into the top three where they “kind of control things.”

Now it seems all that’s left to determine is how the quarterback prospects stack up on San Francisco’s board. Trevor Lawrence is nothing more than a pipe dream, but there’s at least a marginal chance BYU’s Zach Wilson is still available so long as the Jets don’t take him at No. 2. If anyone would know the direction in which the Jets might be leaning a month before the draft, it would be Jets coach Robert Saleh’s former team, the 49ers. And if it isn’t Wilson, there’s also Justin Fields, Trey Lance and Mac Jones.

The latter of the trio has gained some steam for the way he could fit in San Francisco’s offense, despite not ranking as high as the others on most analysts’ boards. Then again, ﻿Kirk Cousins﻿ wasn’t near the top of anyone’s board back when Shanahan was in Washington, where the Football Team drafted Cousins in the same class as ﻿Robert Griffin III﻿ and eventually handed the keys to Cousins.

Shanahan thought his 49ers might have a shot at landing Cousins via free agency, but acquired Garoppolo before that could become a possibility. Now, they might have their eyes on the next Cousins in this class.

Is it Jones? Is it Wilson, and the 49ers have a sense that he might be available? Or is San Francisco looking for a more athletically gifted prospect in the mold of Fields or Lance?

These are the questions we’ll ponder for the next month. In case you didn’t understand why the draft attracts so much attention, you might have an inkling now.