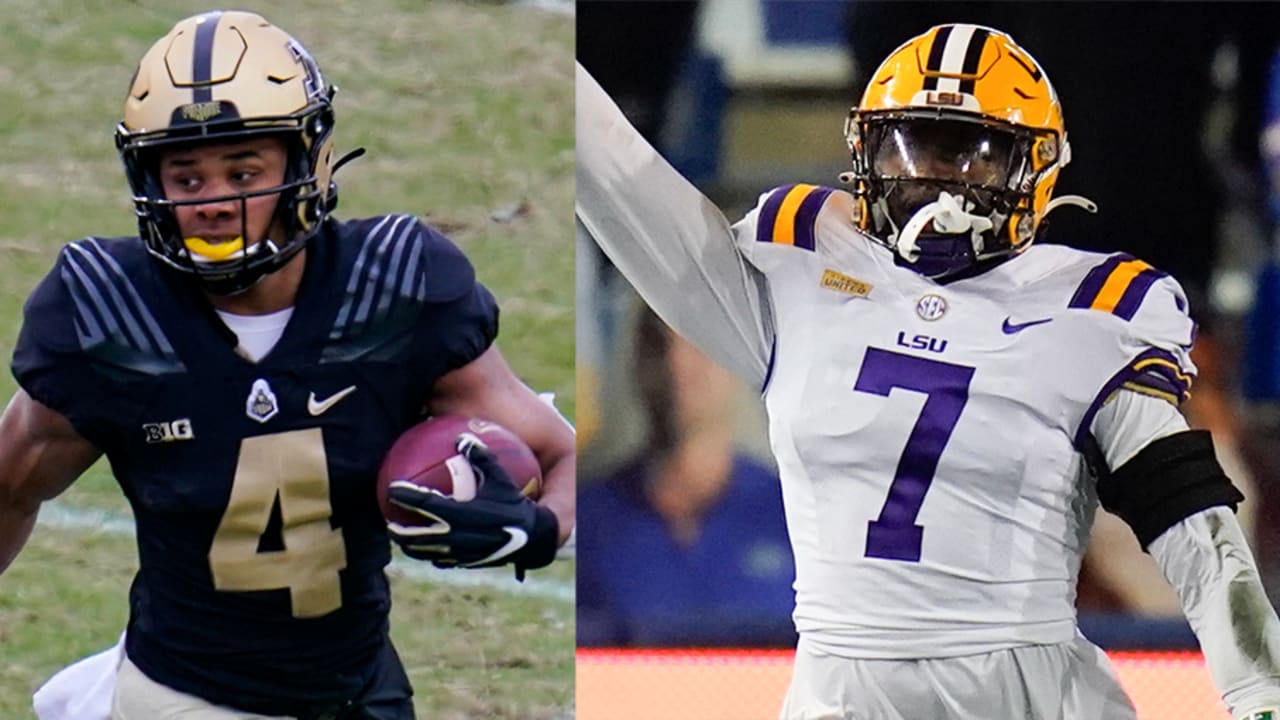 How can an NFL team improve its chances of finding a diamond in the rough in the later rounds of the NFL draft? With the support of analytics.

Last week we broke down the can’t miss prospects of the 2021 NFL Draft. Now we turn our attention to the sleepers of the class. By combining Daniel Jeremiah’s top 150 prospects ranking and the results of the Next Gen Stats NFL Draft model, we’ve identified starter-caliber talent that will likely still be available after Round 1.

Below are the Day 2 standouts and Day 3 hidden gems with the best chance of becoming starters at the NFL level.

NOTE: We do not currently have a model to predict pro success for offensive linemen. Players who did not participate in drills at their respective pro days are given an estimated athleticism score based on their size and projected time in the 40-yard dash.

The modern-day NFL cornerback must have ideal athletic traits to mirror in coverage, enough length to match up against the league’s bigger receivers and disrupt passing lanes, and tape that shows the player can put it all together. Stokes fits each part of that description. At 6-foot and 194-pounds, with 32 and 3/4-inch arms, Stokes ran a 4.29 40 at Georgia’s pro day, fast enough to be ranked as the second-fastest time among the 265 scouting combine invitees from this year’s class, behind only Auburn receiver Anthony Schwartz (4.25 seconds).

While size and speed are some of the traits that often make for a successful cornerback, the ability to make plays on the football is a desirable skill set no matter the defensive system. Stokes finished his junior season with a team-high four interceptions, including two returned for a touchdown. Out of all of the corners in this year’s class, Stokes has the highest probability of making a Pro Bowl within his first three seasons – ahead of two of our can’t-miss prospects, Jaycee Horn (27 percent) and Patrick Surtain II (24 percent).

Playmaking ability is one of the most predictive traits when it comes to projecting the NFL success of a safety prospect, and Grant was a turnover machine. The rangy safety generated 15 takeaways (10 INTs, five forced fumbles) over his last three seasons with the Golden Knights. The three-time first-team All-AAC, and Thorpe Award finalist (awarded to the nation’s top defensive back), enters the draft with a 90 production score, third-highest among safeties in this year’s class behind only LSU’s JaCoby Stevens (95) and Indiana’s Jamar Johnson (92). Grant also finished top-five among safeties in the three-cone (6.78 seconds) and the broad jump (10-feet, 9-inches), helping him earn an above-average 75-athleticism score.

Speed wins in today’s NFL. Identifying the next game-breaking wide receiver, with Tyreek Hill-like explosive traits, is certain to be on the minds of every general manager across the league. Moore may be the best chance at finding one outside of the first round. Checking in at 5-foot-7 and 181 pounds, Moore makes up for his lack of size with elite athletic traits. Among the 52 WRs invited to this year’s reimagined scouting combine, Moore ranked top-three in the 40 (4.33), vertical jump (42.5 inches) and three-cone drill (6.68), resulting in a 92 athleticism score, per the NGS model. If it weren’t for the three games he missed in 2020 and the eight he sat out in 2019 due to a series of lower body injuries, the former freshman phenom would have checked in with a higher production score than 72. As a true freshman in 2018, Moore led the FBS in receptions (114) and won the Paul Hornung Award given to the nation’s most versatile player. The upside is there, and he’s one of the youngest player’s in this year’s class.

After shining at the Senior Bowl, Eskridge showed off his track background by running a 4.39 40 at his pro day. Team evaluators may be even more impressed by the Mid-Atlantic Conference star’s 1.51-second 10-yard split, representing elite initial acceleration. What makes Eskridge even more likely to contribute early to an NFL roster? The dynamic receiver, and former cornerback, not only earned first-team All-MAC for his offensive production, but was also the MAC Special Teams Player of the Year as a return and coverage specialist. For skill-position players selected in the middle rounds, the ability to play special teams can often be the deciding factor in earning field time at the start of their careers.

DJ’s Big Board Ranking: Not ranked

Stevens meets all the criteria of an NFL safety when it comes to size, athleticism and production. The LSU defender enters the draft with the highest production score of any safety in this year’s class (95) and tied for the best athleticism score (97). Testing in the top 5 percentile among safeties (using an aggregate of historical combine and pro day data) in the vertical jump (42 inches) and broad jump (10 feet, 10 inches) will earn a 212-pound safety such a score. It may seem bizarre to see these marks associated with a prospect few have pegged as a top-tier talent, but Stevens passed all the thresholds in the data. He’s the total package that doesn’t have buzz.

Nixon, a former junior college transfer turned first team All-American, checks all the boxes when it comes to projecting a player’s future pro success. At 6-3 and 313-pounds, with 35-inch arms, Nixon ran a blazing 4.86 40 at his pro day, a time that would seem far-fetched if not for the 71-yard pick-six he put on tape last November. Nixon’s 95 overall draft score ranks behind only Quinnen Williams (99), Aaron Donald (98) and Ed Oliver (96) among defensive tackles invited to the NFL Scouting Combine since 2013. That type of company may make Nixon a coveted player come Saturday.

Cisco is the case of an early-round talent who could fall to the later rounds because of an injury. The fearless defender tore his ACL in pregame warmups against Georgia Tech last September, which ended his 2020 season and subsequently kept him from working out at Syracuse’s pro day last March. Using Bruce Feldman’s college football Freaks List as a reference for Cisco’s speed (mid-4.3s), we can input the information we have — size, bench reps and 40-time — to generate an estimated athleticism score (96) using a statistical technique called imputation. Despite the lack of recent film, Cisco’s pre-injury tape showed an incredibly productive player. The former freshman All-American posted 13 interceptions and 16 pass breakups in 24 career games during his time with the Orange. The model gave Cisco a production score of 80 driven by his playmaking prowess.

DJ’s Big Board Ranking: Not ranked

Teams searching for a height-weight-speed wide receiver prospect with upside on Day 3 of the draft should have their eyes on Fehoko come Saturday. Measuring in at 6-4, 222 pounds, Fehoko earned a 91 athleticism score with an impressive pro-day performance that included a 4.43 40, 1.59-second 10-yard split and 6.78-second three-cone. A shortened Pac-12 season in 2020 due to COVID-19 kept the redshirt sophomore from accumulating more production in the passing game (37 catches, 574 yards). However, a closer look at his efficiency metrics tells a more nuanced story. Fehoko set a school record as a redshirt freshman, averaging 23.6 yards per reception (566 yards on 24 catches). Between 2005 and 2020, there have been six receivers in our historical combine data set to enter the draft with a 90-plus athleticism score, 70-plus production score and weigh in at more than 220 pounds: Calvin Johnson, Julio Jones, Donte Moncrief, DK Metcalf, Miles Boykin and Chase Claypool. Fehoko would be No. 7.