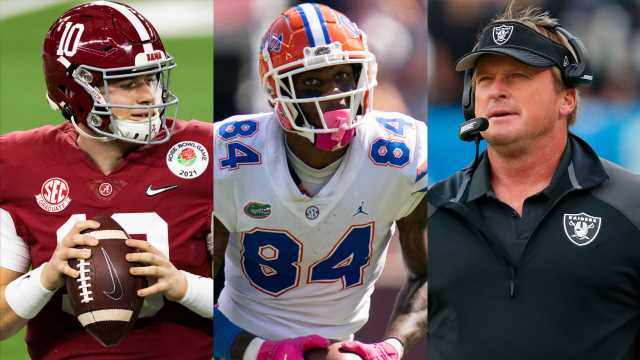 Cleveland rocks — yes, I’m talking about the host city of the 2021 NFL Draft and the crop of rookies the Browns landed.

One year after the event went virtual because of the COVID-19 pandemic, the in-person draft was back, and it was more amazing than ever. Now that this major milestone in offseason team-building is in the books, there is plenty to chew over. The Cowboys and Eagles, hated NFC East rivals, made a win-win trade. The Steelers and Saints made confusing moves. The Bengals made ﻿Joe Burrow﻿ happy, acquiring his former LSU receiver Ja’Marr Chase.

But none of those teams made my annual look at the draft hauls I love, like and loathe. Who did? I’m glad you asked — let’s get to it, Schein Nine style.

NOTE: A link to each team’s full draft class is included at the top of each blurb.

In 2020, the Patriots’ talent-deficient roster scuffled to the team’s first losing record in two decades. So Bill Belichick went out and put together a sensational free agency period, upgrading whole swaths of the depth chart — except at quarterback.

When the San Francisco 49ers, who had long been discussed as a match for Jones, passed on him in favor of Trey Lance at No. 3 overall, it set the stage for the seemingly inevitable: Jones’ pairing with the Patriots. Yes, Jones fell to No. 15, but really, he won. Because based on the accuracy, arm talent, leadership and moxie he showed during a sensational tenure running Steve Sarkisian’s pro-style offense in college (not to mention his championship pedigree), it feels like he was put on Planet Earth to be Belichick and Josh McDaniels’ next quarterback.

Heading into the draft, I thought Jones was a great fit for the Niners, and that he’d prove himself instantly better than Jimmy Garoppolo, who I expected to then be shipped back to New England. This outcome is so much better for the Patriots. Jones is going to be Offensive Rookie of the Year material and their quarterback for a very long time — including for their next championship down the road.

Oh, and by the way, Belichick stole my favorite defensive tackle, Christian Barmore (an Alabama/Nick Saban product, obviously) in Round 2, and also scooped up Rhamondre Stevenson, who has great hands out of the backfield, in Round 4.

Color me obsessed. The Patriots are back!

Chargers general manager Tom Telesco is so great at his job. He allowed the draft to come to him, a strategy that enabled him to pounce on two starters at areas of need.

I named the Chargers my 2021 Cinderella team back in March, but they still needed to find a starting left tackle to keep the pressure off 2020 Offensive Rookie of the Year Justin Herbert, who must be protected at all costs. Then Telesco nabbed Rashawn Slater, a pick I love — without having to budge from No. 13 overall. In a related story, I’d like to congratulate the Chargers in advance on reaching the 2021 playoffs. Oh, and cornerback Asante Samuel Jr. was an absolute steal in Round 2.

When it comes to quarterback moves made in the Ryan Pace era, hope has been in such short supply. Think of the three-year, $45 million contract given to Mike Glennon, who was cut after one season. Or the ill-fated decision to trade up for Mitchell Trubisky at No. 2 overall in 2017. Or the acquisition of Nick Foles, which involved sending a fourth-round pick to the Jags and paying gobs of cash to a player whose Chicago career thus far has consisted of a 2-5 record and 10:8 TD-to-INT ratio. Or the inability to trade for Russell Wilson. Or just think of this tweet.

Well, new QB Justin Fields simply equals hope. I wasn’t sure Pace would make the bold move he needed to, but when Fields fell, Pace pounced, trading up with the Giants to snag the Ohio State QB at No. 11 overall. And just like that, the energy (and the conversation) shifted. Fields is super smart, a great leader, a fantastic thrower and an outstanding athlete. How sweet does that sound, Chicago? I’m so happy for Bears fans.

Eric DeCosta, take a bow — again. The Ravens are just so great at owning the draft, and that continued in 2021.

Sure, the deal that sent Orlando Brown Jr. from Baltimore to Kansas City was awesome for the Chiefs, who needed a left tackle to protect Patrick Mahomes. But from the Ravens’ point of view, they landed a premium draft choice in exchange for a player who was never going to play for them again. Even better, Brown, who was originally a third-round pick, essentially turned into first-round pick Odafe Oweh — just watch defensive coordinator Wink Martindale turn the pass rushing prospect into a star.

The Ravens also needed receivers, and they got them. Rashod Bateman, drafted 27th overall, is an instant-impact cat, and Tylan Wallace looks like a super strong choice in the fourth round. That’s not all; Georgia guard Ben Cleveland and SMU corner Brandon Stephens, both taken in the third round, were great picks. And I loved the addition of Ohio State corner Shaun Wade, drafted in Round 5. Forget Wade’s struggles in 2020; he will thrive in Baltimore’s culture.

I know Jags coach Urban Meyer is coming off his first NFL draft, but it feels like he’s been doing this forever. Yes, first overall choice Trevor Lawrence is a generational talent at quarterback. I am also quite taken with the selection of dual-threat running back Travis Etienne at No. 25. I’d been championing him as a first-rounder, and he’s going to do it all for Meyer, Alvin Kamara-style. It’s pretty great that the Clemson stars are staying together. But the goodness didn’t end there; Walker Little (Round 2, No. 45 overall) was a great offensive-line pick. And I loved the addition of defensive studs Tyson Campbell (Round 2, No. 33) and Andre Cisco (Round 3, No. 65) to a unit that ranked 31st overall and 27th against the pass in 2020. Cisco has the potential to be a real steal if he proves to be fully recovered from the knee injury that he suffered early last season.

The Falcons had a chance to draft a quarterback prospect at No. 4 overall to develop behind 35-year-old Matt Ryan. But new Atlanta GM Terry Fontenot smartly chose not to “Jordan Love” Ryan, who still has plenty left in the tank. Instead, Fontenot used the slot to seriously boost Ryan’s supporting cast, adding unicorn tight end Kyle Pitts, whose grade includes a Hall of Fame-caliber ceiling. Pitts is going to thrive in Atlanta under new head coach Arthur Smith. This was sheer perfection.

GM Joe Douglas needs his hand-picked quarterback to become a star, and it’s fair to say this Jets draft will be judged by No. 2 overall choice Zach Wilson’s ability to fulfill that promise. I’m a big fan of the pick — but it’s what Douglas did to support Wilson that has me wowed. Alijah Vera-Tucker is going to be a fantastic offensive lineman, and I loved the decision to trade up for him at No. 14. Douglas then stole receiver Elijah Moore at the start of Round 2. And North Carolina running back Michael Carter (Round 2, No. 107) can aid right away. In short, Douglas’ second draft on the job was a thing of beauty.

Apparently, there are three guarantees in life: death, takes and Las Vegas gambling in the first round.

I got on the Raiders last year for taking Henry Ruggs 12th overall over fellow receivers Jerry Jeudy (who went to the Broncos at No. 15) and CeeDee Lamb (who landed with the Cowboys at No. 17). Ruggs went on to finish with less than 30 catches (26) and 500 yards (452) and precisely two touchdowns, while Lamb and Jeudy produced like top-end pass-catchers. And there was Las Vegas’ mind-boggling use of the 19th overall pick last year on Damon Arnette, who logged just two passes defensed in nine games. Clelin Ferrell (6.5 sacks in two seasons) was a reach at No. 4 overall in 2019.

Then they select tackle Alex Leatherwood, ranked 62nd overall by NFL Network draft guru Daniel Jeremiah, with the 17th overall pick in 2021? Sure, safety Trevon Moehrig was a steal in Round 2, and there have been other recent hits, including Josh Jacobs in 2019. But the Raiders’ draft choices since Jon Gruden returned in 2018 have included a concerning number of head-scratchers, to say the least, seriously calling into question the organization’s approach to working the board, apparently without much consideration for how other teams value the players they like.

We’ll get to the Packers’ 2021 draft in a second. First we must grapple with the continued reverberations of Green Bay’s inexplicable, counterproductive and disruptive decision to trade up for QB Jordan Love in last year’s first round. As I wrote at the time, eschewing a receiver who could help Aaron Rodgers in favor of adding Rodgers’ future replacement was the wrong move, especially when you consider Rodgers, the 2020 NFL MVP, isn’t even close to being done at age 37. Of course Rodgers is unhappy and seems not to trust the organization. Of course negotiations on a new contract are not bearing fruit, with the team already having invested in the next man in line. It felt karmically appropriate when news of Rodgers’ discontent took center stage ahead of this year’s draft, promising that whatever the Packers did would be overshadowed by the drama.

Rodgers is one of the most skilled quarterbacks of all time, but he also has options, like maybe trying to become the permanent host of Jeopardy! or doing something else with his brains and wits. He reportedly wants out of Green Bay, per ESPN. Packers GM Brian Gutekunst and CEO Mark Murphy have continued to insist they are committed to Rodgers and that they won’t trade him. From where I stand, to make Rodgers happy, I think the Packers will have to either make a financial commitment beyond 2021, trade Love — who they seem to be dug in on keeping — or make a change at GM. The team could call his bluff and refuse to budge on either a new deal or a new home, but I wouldn’t underestimate Rodgers’ resolve — if the Packers won’t let him play elsewhere, I could even see him retiring. And I wouldn’t blame him. As far as this year’s draft goes, I don’t see it moving the needle (although I do think receiver Elijah Moore would have been a better choice than cornerback Eric Stokes at 29th overall). It remains to be seen if the relationship with Rodgers can be salvaged, or if it’s all too little, too late going on one year after one of the worst draft-day decisions ever.