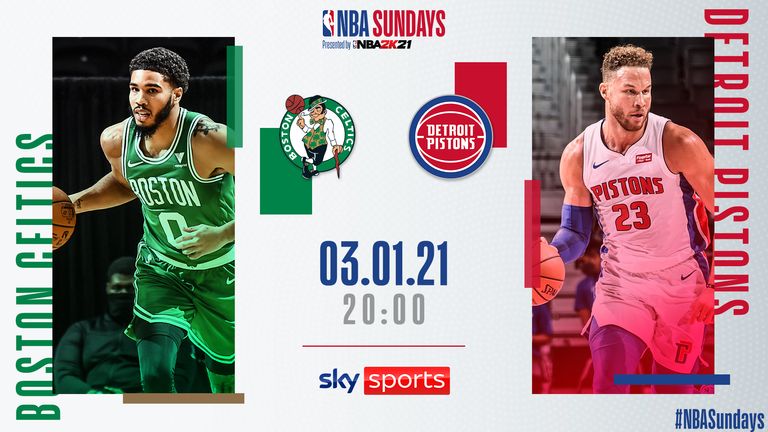 The revisions made to the NBA schedule to decrease travel give the Boston Celtics a swift shot at redemption in Detroit after the Pistons collected their first victory of the season at the Celtics’ expense, on Friday.

The two Eastern Conference clubs will match up once again in Detroit on Sunday afternoon, last than 48 hours after a 96-93 victory for Detroit.

Boston righted themselves after a slow start only to fall apart offensively in the late going. The Celtics scored just 12 points in the first quarter – their lowest-scoring quarter of the young season – and trailed by double digits most of the first half.

They rallied behind Jayson Tatum and Jaylen Brown to take a 93-88 lead but went scoreless in the last 4:15.

“We had a lot of wide-open shots,” Boston coach Brad Stevens said. “I think what we did was we started off so poorly in the first half, we just decreased our margin for error and every one of those shots was way more meaningful than if we played with better substance in the first half.

“That might have been the basketball gods’ way of saying that we didn’t deserve to win the game.”

The Celtics generally blamed a lack of energy for their sluggish start. They were playing their third game in four nights after recording wins against Indiana on Tuesday and Memphis on Wednesday.

“We’ve got to start the game better and set the tone for the rest of the team,” Tatum said. “The older guys, that’s on us. The second half, we played with a lot more purpose and played a lot tougher and gave ourselves a chance to win. But we missed a lot of good looks towards the end of the game.”

“I just didn’t think we ran hard,” Stevens added. “We did at the end of the game, we did a good job, but these guys are long, athletic, they are well-coached, they are going to be really hard to score on if we start offense (late in the shot clock) and it’s not really crisp.”

Tatum and Brown combined for 53 points and they might be even harder to contain if the Celtics play with more purpose from the start.

Detroit had trouble closing out games prior to the Celtics’ visit. It held fourth-quarter leads in three of its previous four games.

Sixth man Derrick Rose, who scored the go-ahead basket with 1:20 remaining, was pleased the way his team dug in during the closing minutes.

“Your shots are not going to fall every night but something that should be consistent is your defense,” he said.

“We harped on that from the beginning of the year. Everybody’s got to have one common goal and that’s to let teams know when they come here it’s going to be that kind of grimy game.”

“Right when we picked him, I knew we had an asset,” Rose said. “He’s a shooter. Whenever I’m out there with him, I always keep an eye on him and see where he is on the floor. (Friday), he played great.”

Detroit will likely have to go without Griffin once again. He’s in the league’s concussion protocol.