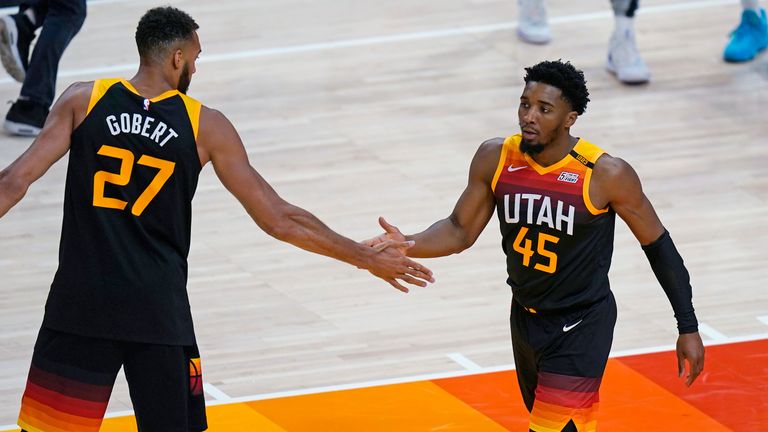 Donovan Mitchell amassed 30 points and 10 assists to lead the Utah Jazz to a first-round-clinching 126-110 Game 5 victory over the Memphis Grizzlies on Wednesday night in Salt Lake City.

Sixth Man of the Year winner Jordan Clarkson added 24 points and Rudy Gobert totalled 23 points with 15 rebounds and three blocks as the Jazz, who led by as many as 35 points, earned their fourth consecutive win to eliminate the Grizzlies.

Utah, which finished with the best record in the NBA, now awaits the winner of the Los Angeles Clippers-Dallas Mavericks series.

Ja Morant tallied 27 points with 11 assists while Dillon Brooks also scored 27 for the Grizzlies, who were in the playoffs for the first time in four years.

Memphis had to win two games in the play-in – over San Antonio and Golden State – to qualify for the playoffs.

The Grizz gave the Jazz a scare by winning the first game in Salt Lake City, but everything changed in Game 2 when Mitchell returned.

Utah opened this game like its players were on a mission to not repeat what happened in the first round last year when the Jazz took a 3-1 lead over Denver only to lose the series after dropping three straight.

Utah went ahead by double digits for good at 18-7 less than four minutes into the game when Bojan Bogdanovic made a layup after a Mitchell 3-pointer.

Donovan Mitchell (30 points, 10 assists tonight) joins Deron Williams and John Stockton as the only @utahjazz players with 30+ points and 10+ assists in an #NBAPlayoffs game. pic.twitter.com/m0fcszjtve

Memphis showed signs of life early in the second quarter, opening on a 7-2 run to pull within 15. But, as they’ve done the past four games, the Jazz responded. Utah went on a 7-0 run, sparked by four points from Gobert, and cruised to a 75-51 halftime lead.

Mitchell capped his 26-point first half with a buzzer-beating 3-pointer.

The Jazz built their lead to 35 points in the third quarter at 91-56 after a Clarkson 3, and they took a 106-76 advantage into the fourth quarter. That was the third time in this series — and just the fourth time in franchise history — in which Utah scored at least 100 points in the first three quarters, according to the Jazz broadcast.

Royce O’Neale and Bogdanovic each finished with 17 points for Utah.

The only thing that went wrong for the Jazz on this night — when they shot 51.6 percent overall and hit 17 of 44 3s — was that All-Star point guard Mike Conley left in the second quarter with a sore left hamstring. That’s the same injury that kept him side-lined for nine games at the end of the regular season.