Serge Ibaka scored a career-best 34 points and grabbed 10 rebounds as the Toronto Raptors beat the LA Lakers 121-107 to improve to 9-1 and move to the top of the Eastern Conference.

Kyle Lowry added 21 points and matched his season best with 15 assists to set a club record of eight straight games with 10 or more assists. It was his seventh double-double this season.

Ibaka shot 15-for-17 from the field as the Raptors, who were without the injured Kawhi Leonard, made their best start to a season. 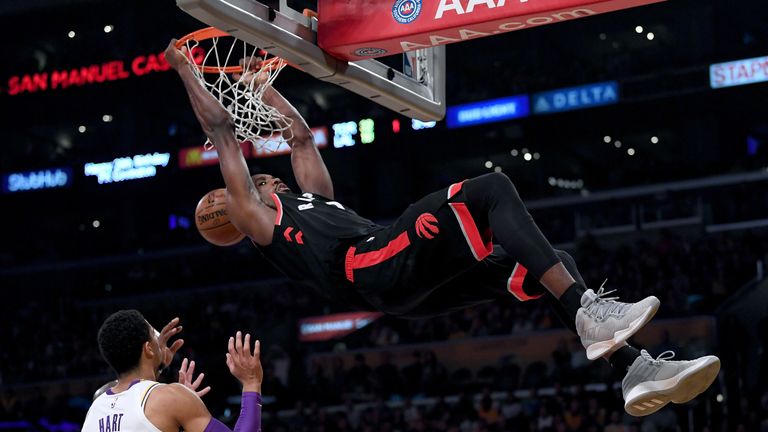 Pascal Siakam had 16 points and 13 rebounds for his third double-double of the season, while Danny Green had 15 points, Jonas Valanciunas 14 and Delon Wright 11 for the Raptors.

Kyle Kuzma had 24 points for the Lakers while LeBron James added 18, but could do nothing to stop the Raptors, who had a furious start.

Ibaka hit his eighth field goal in eight attempts while Lowry picked up his ninth assist when the Raptors took a 34-10 lead with 3:45 to play in the first. Ibaka finished the period with 20 points and the Raptors led 42-17.

But that was as close as they got as they slipped to 4-6 and 12th spot in the West.

On Saturday November 10, you will be able to follow the Milwaukee Bucks @ Los Angeles Clippers, also available on a free live stream, from 8:30pm on skysports.com and the Sky Sports app.