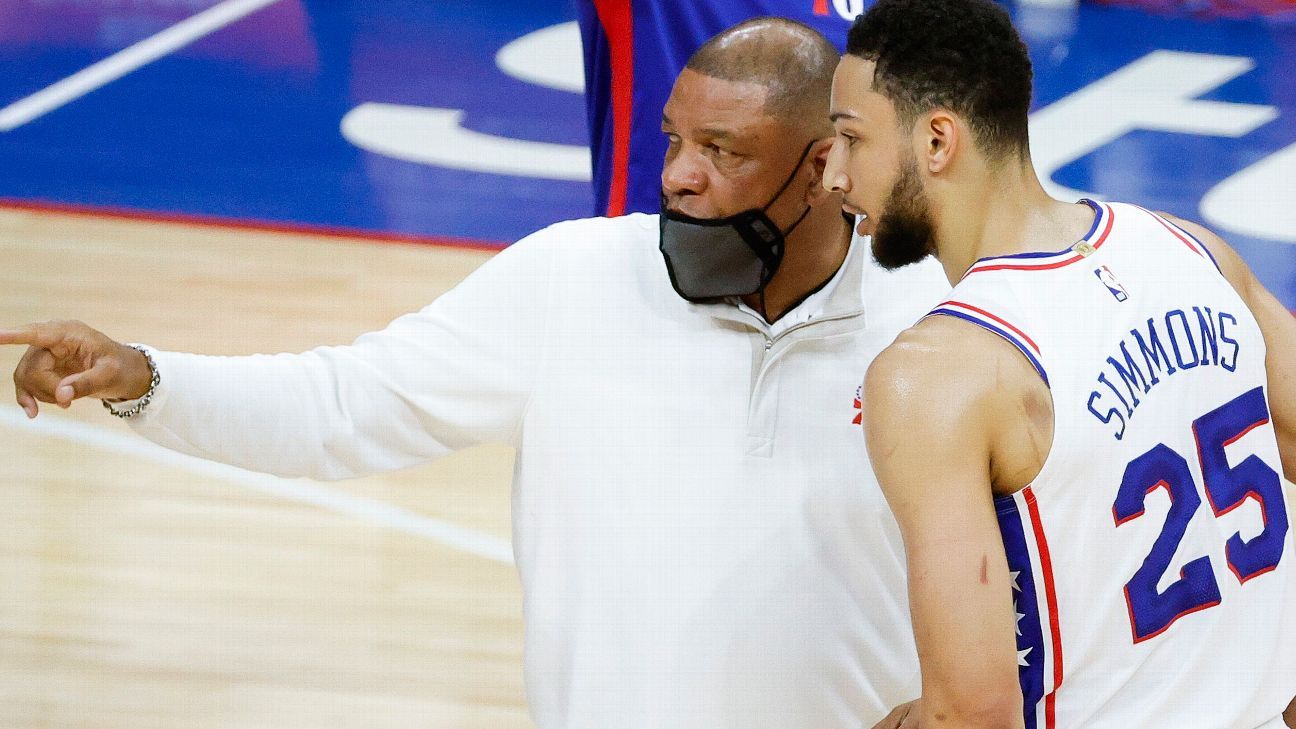 PHILADELPHIA — As discussions between Ben Simmons’ side and the Philadelphia 76ers have gained momentum in recent days, 76ers coach Doc Rivers said Monday night that from “day one” Philadelphia has wanted Simmons to come back and play for the team, and that his teammates will welcome him back if he does return.

“Listen, we’ve said from day one what we wanted,” Rivers said before Philadelphia faced the Brooklyn Nets at Wells Fargo Center. “We’d love to get him back.

“Other than that, honestly, there’s nothing to report. Our position hasn’t changed at all.”

Sources told ESPN’s Adrian Wojnarowski earlier Monday that Simmons could return from what is now a two-week holdout as soon as sometime this week. While talks between Philadelphia and Klutch Sports CEO Rich Paul, Simmons’ agent, have been ongoing throughout the process, sources told Wojnarowski that Simmons could soon reach out to team management — something that hasn’t happened since the meeting between the two sides in Los Angeles in August.

Including Monday’s game against Brooklyn, Simmons has lost more than $1 million in salary for failing to report to the team. He has four years and $147 million left on the maximum contract extension he signed in 2019, including $33 million this season.

Asked how Simmons will be received by his teammates if he does return this week, Rivers said that is the least of his concerns.

“Players don’t get involved in business,” Rivers said. “That is the one thing that I think is probably overplayed more than anything. I’ve been a player and this has happened before, and I was the player that has done it before, and yeah, other than the first 10 minutes of welcoming back and taking crap from your teammates about missing camp and stuff. …

“Guys want to win. They do. I’m telling you. Especially if you’re on that type of team where you have a chance to win. They want to win, and they look at Ben as a guy who can help them win.”

But if Simmons shows up this week, will he be ready to help the Sixers win when the season starts next week? While Rivers said he couldn’t say for sure, his assumption was that Simmons would, in fact, be ready to go for next Wednesday’s game against the New Orleans Pelicans and then next Friday’s home opener against the Nets.

“I don’t know [since] I haven’t seen him,” Rivers said. “My guess would be yes, but I can’t guarantee that.”

Rivers repeatedly said the conversations with Paul have been “very positive” throughout this process, which began in the aftermath of Philadelphia’s loss to the Atlanta Hawks in Game 7 of the Eastern Conference semifinals — a game that saw Simmons pass up a wide-open dunk that could have tied the game with under four minutes remaining in the fourth quarter. Philadelphia wound up never tying the game, and its season ended.

Asked whether he was concerned about Simmons being motivated to play if he returns to the team — given that Simmons had asked to be traded — Rivers immediately said he wasn’t.

“No, I’m not,” Rivers said. “I’m not, honestly. We’ve been around this before, haven’t we? We really have, in different ways, and my guess is when, if he comes he will be ready to play.”