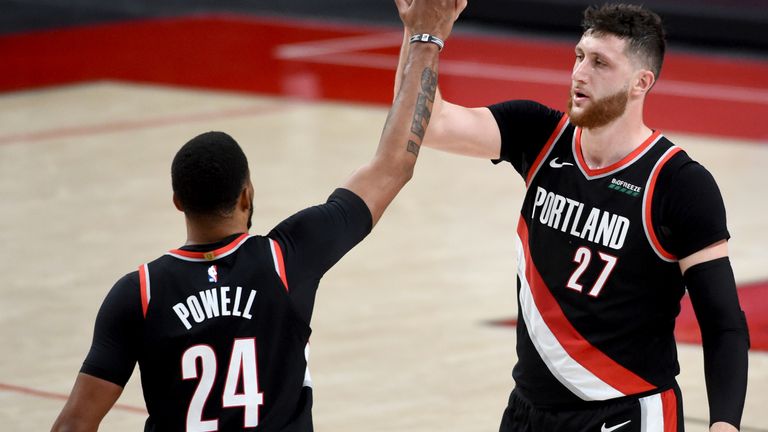 Usually a big night from Damian Lillard is required if Portland are going to win, but on Saturday it was all about the team’s supporting cast and their defense.

Usually the chants in Portland are for star Lillard. On Saturday, Norman Powell was treated to the crowd’s adulation.

Powell matched his career playoff high with 29 points and the Trail Blazers beat the Denver Nuggets 115-95 in Game 4 to even the first-round series at two games apiece.

“I love these types of games, these kinds of moments. It’s the moment where nothing else matters,” Powell said. “You get caught up in the course of the season with stats sometimes, this-that-and-the-other, road trips, but when you get into the playoffs, the only thing that matters is winning.”

Powell made four 3-pointers and was 11 of 15 from the floor to go with two rebounds, two blocks, an assist and a steal in 34 minutes. When he left the floor with the game well in hand, fans chanted “Nor-man Pow-ell! Nor-man Pow-ell!”

“I thought it was really dope,” he said. “At first I didn’t know what they were saying when I was sitting there, and then the guys on the bench were chanting as well so that got a little smile out of me.

“I thought the effort that we put in from start-to-finish was the exact effort that we needed,” said Powell. “I thought we were able to take the effort that we had from Game 3, the way we started the game. We have to keep the same effort, locked in and focused for all our guys that are on the floor being locked into the game plan. That’s the energy and effort we need for the full course of the game and the series.” One of the things that people forget about Powell is his championship pedigree. That ring was earned, not given, when he was one of the major supporting cast members for the 2019 Raptors. He knows big moments, taken big shots, helped win big games. In that sense, perhaps Powell is exactly the help Lillard needs to make a reasonable reach for what would be his first NBA Finals trip.

“I just try to pick my spots,” said Powell, who also converted almost as many three-pointers in the first quarter of Game 4 (2) as he had in the first three games of the series (3). “The first play was called for me so I was looking to attack downhill, put pressure on their defense, read the rotations, and make the right play. I’m just trying to be aggressive, attack, and make the right play with the reads that I have.

“I think that’s one of the reasons I was brought over here, to be another guy that can get after it and go get it,” said Powell. “Any given night, any of us can get it going and it makes it tough for the defense to know who to guard and who to try to stop.”

Lillard, meanwhile, was 1 for 10 from the field but finished with 10 points, 10 assists and eight rebounds. He also sat for the final quarter after the Blazers led by as many as 33 points in the third.

Though they had control for most of the first half, Portland took an iron grip on the game by opening the second half with a 12-2 run, with Powell putting up half those points, to take a 20-point lead early in the third quarter. And then a 16-2 run — Portland held Denver scoreless for nearly three minutes this time around — from the 5:55 to 1:55 in the third gave the Trail Blazers a 91-58 lead while all but ensuring their first home win of the 2021 Playoffs.

“It was a great win for us,” said Damian Lillard. “I think the way that we won the game especially just coming out with a lot of energy, we defended, we were aggressive, the ball was moving, and typically we will start that way and will have drop offs, we won’t be able to sustain it. I thought we did a great job at keeping our focus and sustaining that level defensively especially to start the third quarter. Going into the half with a 10 point lead we didn’t come out and mess around. We came out, we picked up, we were physical, we were sharp and paid attention to details. We locked in on our scouting report and we took the challenge.”

CJ McCollum added 21 points for the sixth-seeded Trail Blazers, whilst big man Jusuf Nurkic contributed 17 points. on 6-of-8 shooting, six rebounds, two blocks an a steal in 27 minutes. Carmelo Anthony put up 12 points off the bench on his 37th birthday and Robert Covington added nine points, nine rebounds, a block, an assist and a steal in 36 minutes.

Fans sang “Happy Birthday” to Anthony between the third and fourth quarters, which was a nice touch.

It was imperative for Portland that Nurkic – probably Portland’s best defense against likely MVP-in-waiting Nikola Jokic – stayed out of trouble after fouling out in the previous two games. He managed to do that, and it was a huge factor in those impressive defensive numbers.

“If you would have told me going in that game that Lillard’s going to be 1 for 10 from the field and we’re going to get blown out, I would’ve probably had a hard time believing that,” Nuggets coach Michael Malone said. “So, I have to be a lot better and the urgency has to be there. Maybe this could be a wake up call for our starting group, just to play harder. Good things happen when you play hard, and we didn’t play anywhere close to hard enough tonight.”

The series shifts to Game 5 on Tuesday night in Denver and the Nuggets squad is looking to show a big reaction.

“We got our butts whooped tonight so that should be all the motivation we need,” Denver’s JaMychal Green said. “I mean it was embarrassing. So when we go home we gotta be the aggressors.”