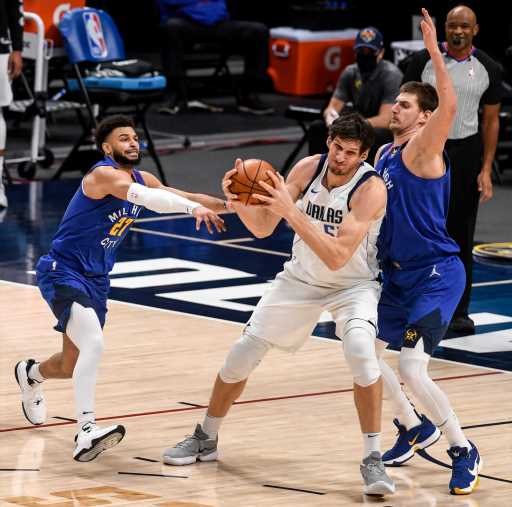 The Nuggets and the Mavericks can’t help themselves. On national TV, two of the NBA’s most exciting franchises, built around generational Europeans stars, authored yet another gripping classic.

After an emotional 24 hours, it was only fitting that basketball could again become a distraction.

The Mavericks survived an incredible individual effort from Nuggets superstar Nikola Jokic, withstanding an overtime session to hang on 124-117. The dramatic loss, sent to overtime after Jokic’s clutch, game-saving jumper to end regulation, dropped the Nuggets to 3-5 on the season.

In overtime, Dallas’ sensational savant Luka Doncic imposed his will on the game. His clutch shooting outshined Jokic’s individual effort in the extra session, though both superstars finished with 38 points.

The Mavericks outscored the Nuggets 15-8 in overtime, as Denver’s rebounding and turnovers were magnified.

Jamal Murray added 21 points and nine assists in the loss. It also overshadowed Gary Harris’ night, after he poured in 15 including some clutch baskets.

The Nuggets will try and rebound ahead of Saturday’s game at Philadelphia.

The symmetry of Thursday’s game was impossible to ignore. Both teams knelt around center court during the national anthem in an apparent nod to the ongoing fight for racial justice in the country. It was also against these same Mavericks whom the Nuggets faced in their final game last March before the season was suspended.

Neither the raging pandemic, nor the lingering racial tensions remain solved.

Jokic picked up his fourth foul less than two minutes into the third. Rather than yank him, Nuggets coach Michael Malone trusted him. Jokic powered his way to eight points in the quarter, going right at Mavericks center Boban Marjanovic despite his size disadvantage. Late in one possession, Jokic even pulled out the Sombor shuffle – his signature one-footed stepback – to pad the lead.

But the Mavericks kept charging. Tim Hardaway Jr. and Doncic traded baskets as the Mavs closed the third on a 17-7 run. By the end of the quarter, Dallas had cut a 12-point deficit to just 78-76.

Following Thursday’s news that forward Michael Porter Jr. would be out at least 10 additional days due to the NBA’s health and safety protocols, according to a league source, the onus immediately turned to veteran Will Barton who’d taken his place in the starting lineup.

Only weeks removed from returning to the court in a game capacity, Barton had his best game of the season on Tuesday vs. Minnesota. Malone said he started to see flashes of the old Barton.

“As I told him after shootaround (Tuesday), ‘You’re not just a shooter,’” Malone reminded him. “You’re a scorer, facilitator, rebounder, defender.’ And I think he’s taking every game he plays, every minute he gets, he’s getting closer to being the Will Barton that we know he’s capable of being.”

Barton started slow offensively on Thursday but was integral to the team’s swarming defense.

The Nuggets played the type of defensive first half Malone dreams about Thursday night. With crisp rotations, sound closeouts and good communication, they put the clamps on Dallas’ potent offense. Denver took a 52-43 lead into halftime after forcing nine turnovers and limiting the Mavericks to just 33% shooting over the first two quarters.

Only Doncic, who got downhill and inside the paint on numerous occasions, found space. His 14 first-half points paced Dallas’ offense.

The Nuggets rode their two horses, Murray and Jokic. The former played aggressively, hunting his shots from the perimeter en route to a team-high 15 points. Jokic uncharacteristically struggled from inside. He finished with 10 points and five rebounds over the first half