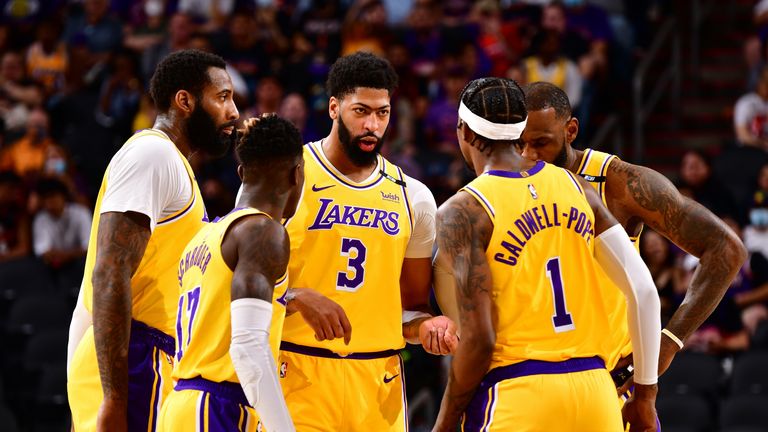 Anthony Davis bounced back to lead the Los Angeles Lakers past the Phoenix Suns, while the Los Angeles Clippers had no answer to Luka Doncic for the second game running as the Dallas Mavericks go 2-0 up in the series.

Anthony Davis amassed 34 points, 10 rebounds and seven assists as the Los Angeles Lakers earned a 109-102 victory over the host Phoenix Suns on Tuesday to even their first-round Western Conference playoff series at one game each.

LeBron James also contributed 23 points and nine assists for the Lakers, who held off a late Suns rally to rebound from a 99-90 defeat in Game 1. Los Angeles’ Dennis Schroder added 24 points, and Andre Drummond had 15 points and 12 rebounds.

Devin Booker scored 31 points for the Suns, and Deandre Ayton had 22 points and 10 rebounds. Both players made their playoff debut in Game 1.

Chris Paul scored six points on 2-of-5 shooting from the field for Phoenix while appearing to struggle with the right shoulder injury that occurred in Sunday’s opener. Paul played 23 minutes, while Cameron Payne played 33 minutes of point guard off the bench and racked up 19 points and a team-high seven assists.

Game 3 in the best-of-seven series is scheduled for Thursday in Los Angeles.

The Lakers’ answer in Game 2 was reminiscent of the first round of the 2020 playoffs, when Los Angeles scored fewer than 100 points in a playoff-opening loss to the Portland Trail Blazers and then won Game 2. The Lakers did not lose another game in that first round and went on to win the title.

After starting slowly in Game 1, the Lakers came out with a more determined pace on Tuesday and took a 53-47 lead into halftime. The Lakers shot just 42.6 percent in the first half but took 14 more shots than the Suns thanks in part to a 8-1 advantage on offensive rebounds.

The Lakers took a 79-72 lead into the fourth quarter before the Suns made their move. Phoenix went on a 13-5 run midway through the period to move on top 88-86 with 6:14 remaining. It was their first lead since 10-8 in the opening quarter.

LeBron and AD taking over in the clutch for the Lakers.

Leading 93-92 with 3:40 to play, the Lakers committed a shot-clock violation but regrouped on defense and turned their opportunities into offense, scoring the next seven points. Five of those came from Davis, and Los Angeles led 100-92 with two minutes remaining.

The same old story: LeBron James with the dagger 👑 pic.twitter.com/v7H1xEGm6l

James sealed the victory by sinking a 3-pointer with 49.8 seconds remaining to give the Lakers a 103-94 advantage.

For a second game in a row, the Los Angeles Clippers had no answer for Dallas Mavericks superstar Luka Doncic.

The 22-year-old guard blew past Los Angeles defenders for 39 points, seven assists and seven rebounds, leading the visiting Mavericks to a 127-121 victory over the Clippers on Tuesday and a 2-0 lead in the Western Conference first-round playoff series.

Doncic’s second straight 30-plus-point game leaves the Mavericks in a commanding position as the best-of-seven series heads back to Dallas for Game 3 on Friday and Game 4 on Sunday.

Doncic did not do it all by himself. He got help from Tim Hardaway Jr. (28 points), Kristaps Porzingis (20 points) and Maxi Kleber (13 points).

Kleber totalled 12 points and Hardaway added 10 points in the opening quarter as Dallas grabbed a 35-33 lead. The Mavericks have not lost a game all season when they led after the first quarter.

Leonard paced the Clippers with 18 points in the first 12 minutes – a personal career high for most points in a playoff quarter.

The Clippers outscored Dallas 40-36 in the second quarter to take a two-point lead into the locker room at halftime. However, Dallas outscored Los Angeles 30-19 in the third to grab a nine-point lead.

Trailing by as many as 14 points early in the fourth quarter, the Clippers cut the deficit to 114-109 on a 3-pointer by Marcus Morris Sr. with just under five minutes left.

However, two possessions later, Morris fouled out with nine points.

Terance Mann cut the margin to four points on a lay-in with 1:24 to go, but Hardaway drained a 3-pointer from the wing to put the game out of reach.