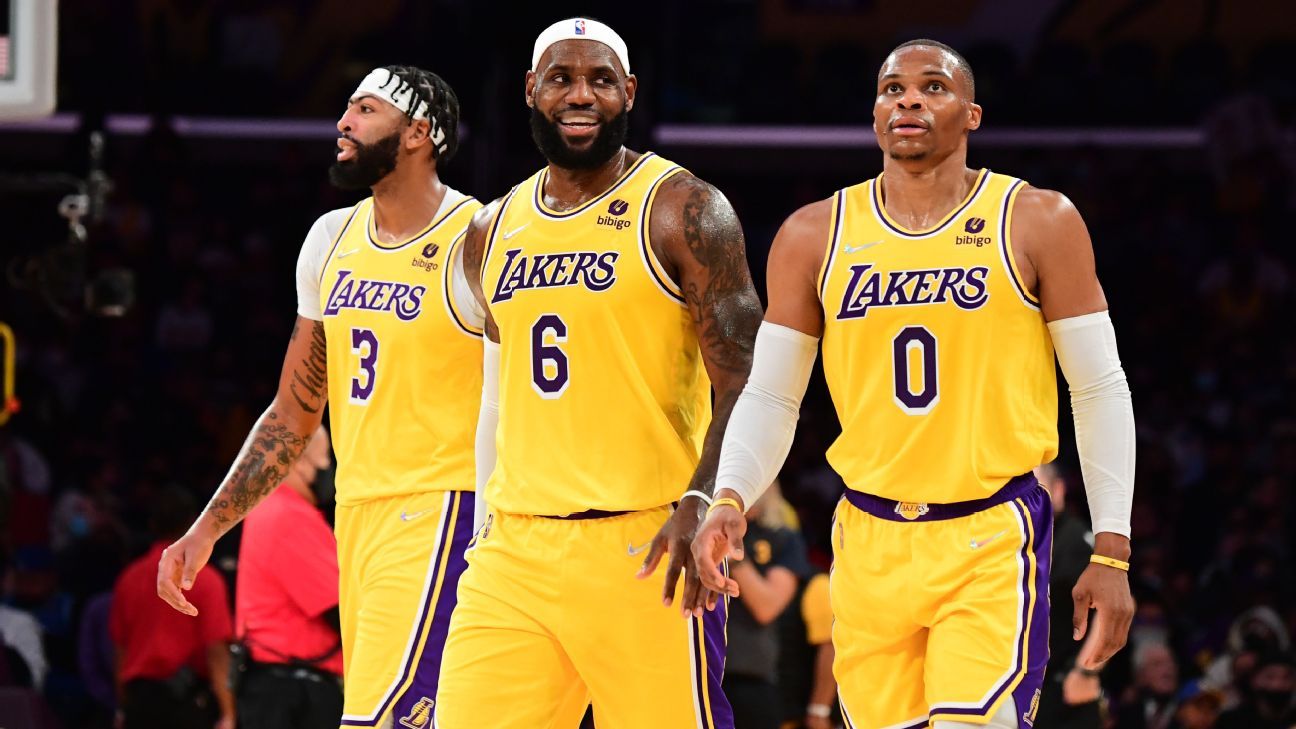 LOS ANGELES — The Lakers’ brand-new Big Three made its preseason debut in a 111-99 loss to the Golden State Warriors on Tuesday. And while the result of Russell Westbrook, LeBron James and Anthony Davis’ first court time together was another defeat to drop L.A.’s record to 0-5 in its exhibition schedule, the postgame message echoed by the stars was one asking for patience but exuding positivity.

“It’s going to take a minute for us to become the team that we know we are going to be capable of being,” said James, who put up 17 points, 6 rebounds, 3 steals and 6 turnovers. “We’re going to have moments where we’re not quite right there. We may take steps backwards. But that’s all part of … I think nothing is worth having if it’s not worth working for.”

Westbrook, who worked his way to the Lakers in the offseason by convincing the Washington Wizards to seek a deal, looked the best he has yet in purple and gold — which isn’t saying much, considering he combined to shoot 4-for-19 with 16 turnovers in his first two outings. But his speed in the open court when flanked by so much talent will be a difference-maker this season.

“We had some good spurts,” Westbrook said after finishing with 10 points, 10 rebounds, 6 assists and 5 turnovers. “Obviously, it’s the first game. But there are some good things we can take from it. … We can be a little encouraged by it.”

For James, who comes into the season seeking a fifth ring that would tie his career total with the likes of Kobe Bryant, Magic Johnson and Tim Duncan, moral victories mean little. Yet the 19-year veteran pledged to guide his group through its nascent stages.

“Me, as a leader, my job is for myself not to get frustrated,” he said. “If I don’t get frustrated, I think it will trickle down to everyone else. I’ve never been a person that’s OK with not being excellent. But I understand things take time as well. As long as I keep the main thing the main thing, stay even keel throughout whatever is going on with our ballclub, then we’ll be fine.”

Davis was more than fine against Golden State, leading the Lakers with 20 points on 7-for-12 shooting to go with 6 rebounds, 2 steals and 2 blocks. He was encouraged by his first glimpse of L.A.’s new-look lineup with him starting at the 5, along with James, Westbrook, Carmelo Anthony and Kent Bazemore.

“We saw some great things with me, Bron and Russ in action,” Davis said. “There’s endless possibilities, the things we can run and we can do. … And even though there were good things, a lot of things that we can do better.”

The Lakers close out the preseason Thursday on the road against the Sacramento Kings and have a week until the regular season opens up, back home against the Warriors again.

There is plenty of more work to do before the Lakers come close to a final product, starting with getting all their players healthy. Trevor Ariza (ankle surgery) is expected to miss at least two months; Talen Horton-Tucker (thumb surgery) will be sidelined around a month; and Kendrick Nunn (right ankle) and Wayne Ellington (left hamstring) both sat out Tuesday, along with Malik Monk (groin), who will be out about another week.

“So, if these guys don’t play, now how do we incorporate them?” Davis said. “So we haven’t had our full team where we’ll be able to look at every detail, but it looks good so far.”

With an 82-game season about to begin for a group that ultimately cares only about getting 16 wins from April to June, time is on the Lakers’ side.

“It could take all year to really be at our best, and ideally, that’s when we are at our best — going into the playoffs,” Lakers coach Frank Vogel said. “But we have the mindset to hit the ground running and come out of the gates really strong with things clicking as best as we can. … But it’s reasonable to think that there’s going to be some bumpy nights early in the season, but we had the expectation coming in two years ago and we jumped out of the gates pretty strong. So, that’s what we’re hoping for.”