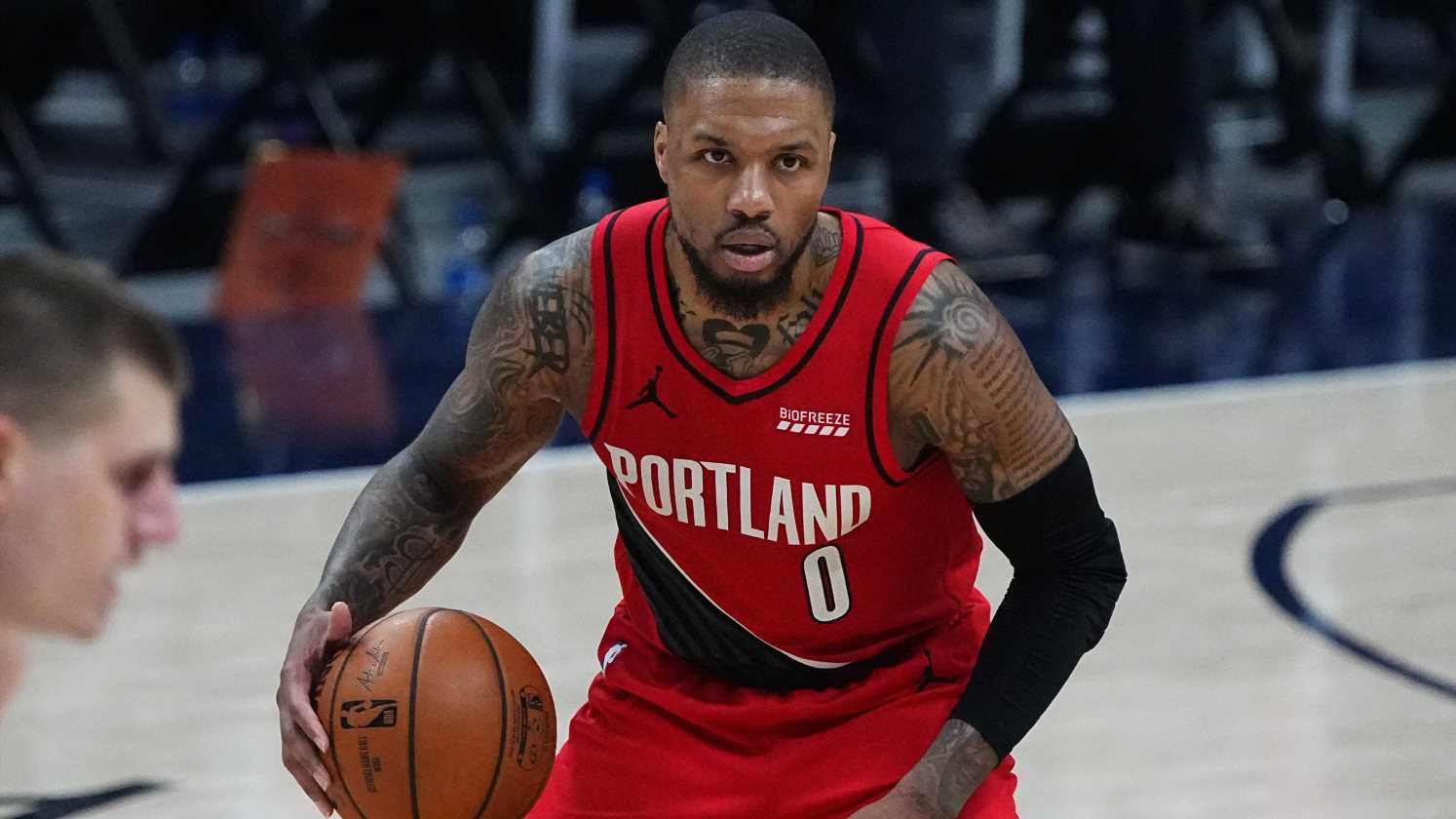 It still wasn't enough for the Portland Trail Blazers.

Lillard poured in a playoff career-high 55 points Tuesday in an otherworldly shooting display, but the Denver Nuggets prevailed 147-140 in a double overtime thriller to take a 3-2 lead in their first-round series. MVP favorite Nikola Jokic had 38 points, 11 rebounds and nine assists for the Nuggets, who can close out the series in Game 6 on Thursday in Portland.

Lillard was the star of the night despite the loss. He shot 17-of-24 from the field overall, including an NBA playoff-record 12 3-pointers, in 52 minutes. He also added 10 assists for the first 55-point, 10-assist game in postseason history.

"It don't matter, we lost the game," Lillard said. "At this point, all that matters is that we can't lose another game in the series."

Denver led by as many as 22 in the first half, but Lillard helped Portland rally to within three by the break. He hit huge shot after huge shot to keep the Blazers in the game down the stretch. His step-back, 28-foot 3-pointer with 3.7 seconds left in regulation tied the game at 121 and sent it to overtime. Lillard then scored 17 points on 6-of-8 shooting in the extra periods. His 12th 3 put the Blazers up 140-138 with 3:47 left in the second OT. However, Lillard was shut out the rest of the way as the Nuggets did all they could to force the ball out of his hands.

"It was the best playoff performance I've ever seen," said Portland coach Terry Stotts. "He gave it his all. He made a lot of shots.

“All that matters is that we can’t lose another game in this series.”

The rest of the Blazers scored just two points on 1-of-14 shooting in the two overtimes.

"It's a shame we wasted one of the all-time best performances by not being more supportive of him," said C.J. McCollum, who had 18 points on 7-of-22 shooting.

It was the latest epic performance for Lillard, who has hit some of the most memorable shots in NBA playoff history, including two series-winning buzzer-beaters. He sent the Houston Rockets home in Game 6 of the 2014 playoffs. He then famously waved the Oklahoma City Thunder off the floor after knocking down a 35-footer in Paul George's face in 2019.

"It was a tough loss, man," Lillard said. "It's do or die now. We gotta win both of the next two games if we want our season to continue. It's as simple as that."

Damian Lillard and the Blazers are on the brink of elimination despite his latest epic playoff performance. (Photo: Ron Chenoy, USA TODAY Sports)

Brooklyn took care of business and finished off Boston in Game 5 to set up the huge second-round series against Milwaukee that everyone circled once the playoff bracket was finalized. A game after matching an NBA playoff record for points by a trio with 104, James Harden (34), Kyrie Irving (25) and Kevin Durant (24) were just too much for the Celtics again and combined for 83 points. Harden added 10 rebounds and 10 assists for the first 30-point triple-double in Nets playoff history. Brooklyn's real test now begins as the playoff pressure ramps up. The Bucks will pose a formidable challenge, with a Big 3 of their own in Giannis Antetokounmpo, Khris Middleton and Jrue Holiday.

James Harden has a Triple-Double of 34 PTS, 10 REB, 10 AST for the @BrooklynNets! #NBAPlayoffspic.twitter.com/WCQWZbSEAQ

The upstart Suns have the defending champs on the ropes after a Game 5 rout that exposed some serious vulnerabilities for the Lakers. Anthony Davis missed the game with a strained groin, and his absence derailed things for Los Angeles. LeBron James had 24 points and seven assists, but he did not dominate the way the Lakers needed him to without Davis. Devin Booker scored 30 points for the Suns, including 22 in the first half as Phoenix put the game away early. Chris Paul aggravated a right shoulder injury that's hampered him since Game 1, but the Suns are hopeful he will be available when they look to finish off the Lakers in Game 6.

Here's where the rest of the first-round series stand entering Wednesday:

Top-seeded Philadelphia returns home for another chance to close out the series, but the biggest concern moving forward is the health of All-Star center Joel Embiid, who is doubtful for Game 5 with a sore right knee. The Sixers are still in control and will likely finish off the Wizards soon, but their title hopes hinge on Embiid being healthy and dominant. If he misses significant time, the Eastern Conference could be wide open. Tobias Harris and Ben Simmons will need to take on larger roles in the offense.

Trae Young and the Hawks look to make the Knicks' return to the playoffs brief with a chance to close out the series at Madison Square Garden. Fan behavior will be front and center as the series is back at MSG for the first time since a fan was banned from the arena for spitting on Young during Game 2. Young hasn't been affected by the fan vitriol in his first playoff experience. Instead, he's emerged as one of the early stars of the postseason, averaging 27.5 points and 10.0 assists.

Mike Conley will never really be a true villain in Memphis; there's too much history there for that to ever be the case. But he's done a great job of playing the role to put the Jazz on the verge of eliminating his former Grizzlies team. Conley knocked down key shots in the fourth quarter to help close out Utah's wins in Games 3 and 4 in Memphis, silencing the Grindhouse crowd that cheered him on for 12 seasons. Ja Morant and the Grizzlies won't roll over facing elimination, but they're clearly overmatched in a series that could serve as a springboard for bigger things next season.

After dropping the first two games of the series in Los Angeles, the Clippers have seized momentum and home-court advantage back with a pair of wins in Dallas. Kawhi Leonard has quietly been one of the top performers of the playoffs thus far, averaging 33 points per game on 64.4% shooting overall and 50.1% from 3-point range. Luka Doncic struggled in the Mavericks' Game 4 loss after straining his neck in Game 3, but his condition has reportedly improved with rest in recent days. The Mavericks need Doncic as close to 100% as possible if they have any hopes of advancing.