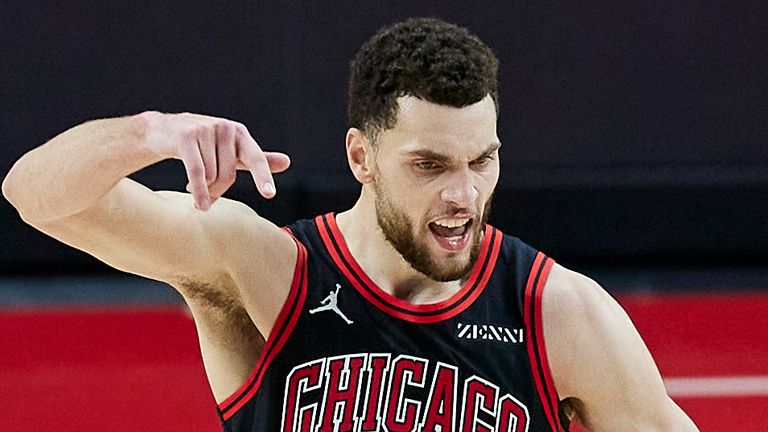 There’s something brewing in Chicago. And while the results early on this season may not scream a pending assault on the top eight, Billy Donovan’s young nucleus is garnering attention, optimism and maybe just a touch of excitement.

But Bulls fans know to approach with caution, and for good reason as they look to snap a run of three-straight losing seasons having not won a playoff series since 2015.

The challenge, along with the history, was part of what attracted Donovan to the job as Jim Boylen’s successor after a season in which he arguably overachieved with the Oklahoma City Thunder on the back of losing Russell Westbrook and Paul George.

Having worked wonders with a three-headed guard prong of Shai Gilgeous-Alexander, Chris Paul and Dennis Schroder, he is now faced with re-shaping a Bulls unit at the beginning of its journey.

“They were the second-youngest team in the league last year, can these young players have a mentality to come in every day to get better, to improve and understand that the result of winning and the result of having successes is not because you want them but because of what you do with your actions every single day?” said Donovan.

This team comes with multiple sub-plots, including the development of rookie forward Patrick Williams after he crept up the Draft board in November to tempt Chicago with the No 4 overall pick.

The Florida State product drew Kawhi Leonard comparisons as Draft day drew closer, with his impact on both sides of the ball warranting increased and perhaps unexpected interest from NBA team executives.

While his production has been sporadic, the 16-point, four-rebound performance against the Atlanta Hawks on debut and experiences matching up with the likes of Giannis Antetokounmpo and LeBron James have hinted the Bulls may have been onto something. His arrival alone has lifted spirits.

“The energy and the atmosphere is crazy,” said Bulls center Daniel Gafford. “We’ve got Patrick (Williams) here, we’ve got the new front office, a new coach. With all the stuff we have all we have to do is come in and work and be able to compete together.”

“We have a different energy and an upbeat tempo about us right now,” added Zach LaVine. “As a team we have something to prove. It’s a commitment from everybody and a winning attitude. We’re laying the groundwork and continuing to get better every day.”

There is no let up in pressure on scoring leader LaVine to spearhead the team, and he’s done so by averaging 26 points per game so far this season. Nonetheless, his two late misses in Friday night’s 117-115 defeat to the Los Angeles Lakers, including a would-be go-ahead effort inside the final five seconds, underlined the kind of defining moment that likely stands between the Bulls and more wins on the sheet.

Donovan has meanwhile presented 20-year-old Coby White with the opportunity to audition and, if the experiment pans out, cement the starting point guard job.

The 2019 first-round pick flourished with a career-high 36 points in Wednesday night’s 128-124 loss to the Sacramento Kings and has offered flashes in wins over the Dallas Mavericks and Portland Trail Blazers, although is some way from delivering the level of creativity expected from the position.

Otto Porter Jr has been a useful veteran presence alongside White, putting up career-best averages while helping the Bulls win four of seven games since entering the starting lineup in place of the unavailable Lauri Markkanen.

Markkanen himself had started the season strongly, averaging 17.3 points per game, 6.8 rebounds and 1.3 assists in four games, while the rotations turned to by Donovan in his absence have struggled to churn out the kind of consistent production he might have hoped for.

“I hold the Bulls dearly to my heart and every year I’m a fan of the Bulls and hoping for the best, but watching them early, something is just not that there that is going to get this team I feel in the top eight to 10 where they want to be,” said BJ Armstrong, a three-time NBA champion with the Bulls.

“I like the young players like Coby White, but overall they don’t seem to have the one thing that makes you ready to say ‘this is a team ready to play in the playoffs’.

“We keep waiting on LaVine, we keep waiting on these players but for whatever reason it hasn’t happened for them. Overall if you’re asking me are they one of the top eight teams in the Eastern Conference, right now I have to say no.”

Teething problems are to be expected. The Bulls entered Friday’s loss to the Lakers averaging a league-most 17.8 turnovers per game and a 23rd-most 21.6 personal fouls per game. Improvements are needed in the front court and while playing to restore some credibility by winning as many games as possible, the Bulls as an organisation will no doubt be paying close attention to the personnel that might become available to them down the line.

The LaVine/White combination is supplying positive signs and wins such as that against the Washington Wizards, Mavericks and Trail Blazers provide reason to believe the team is heading in the direction.

But the Bulls face the Los Angeles Clippers, the Mavs, the Boston Celtics twice and the Lakers again all before the end of the month, putting the pressure on them to win the matchups in between. That stretch begins against the former on Sunday, during which they certainly have the talent to test the supposed lack of chemistry hindering the Clippers right now.

The playoff question might be better suited for another recruitment period, but don’t write this young and fearless team off.