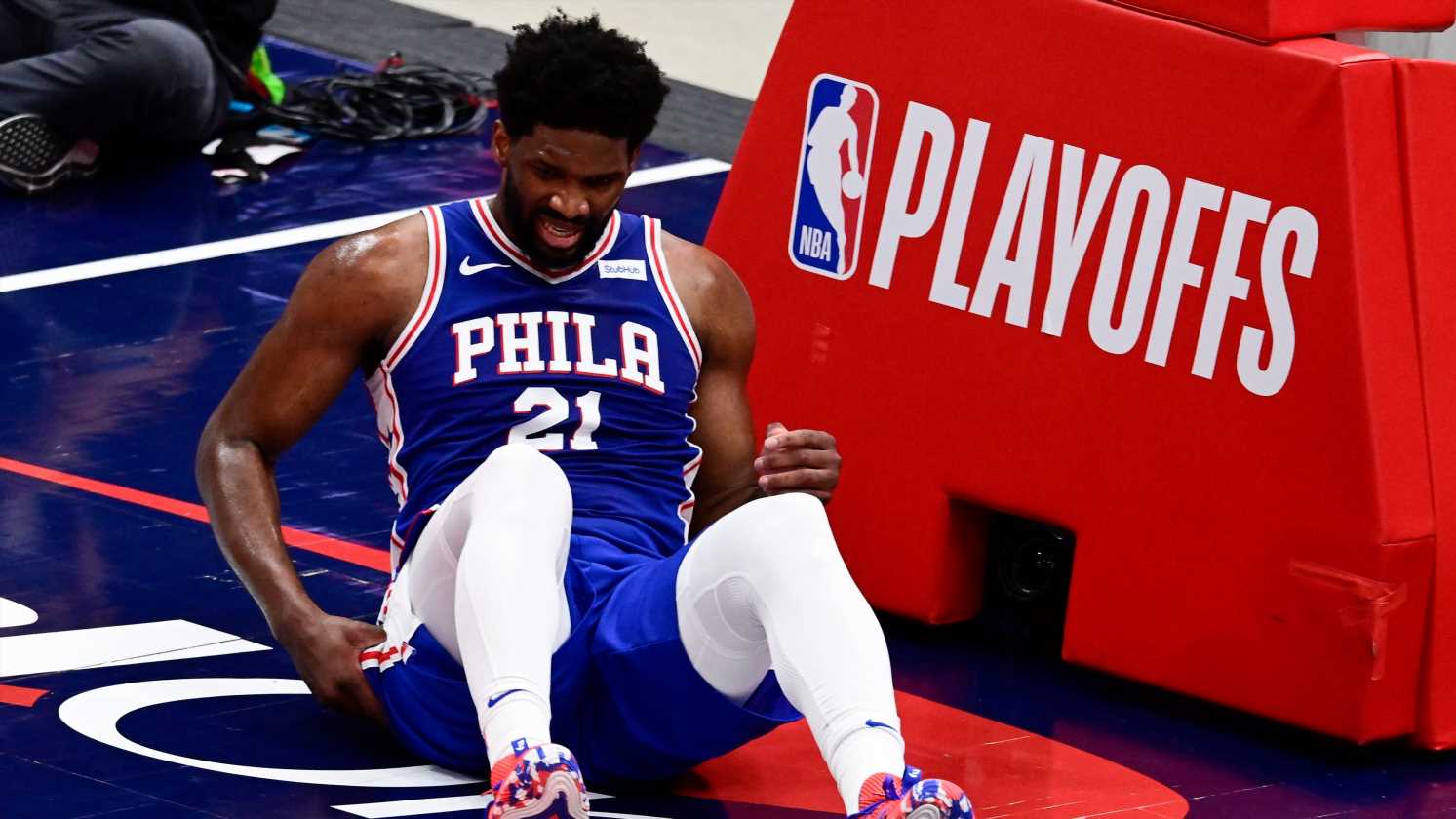 The Sixers can only hope that was their only loss.

Embiid had the best regular season of his career and has followed that with easily the best playoff performance of his career, averaging 29.3 points, 7 rebounds while shooting 54.5% from the 3-point line.

Joel Embiid appears to be injured with a back injury after a hard fall!#Sixerspic.twitter.com/QMJKBkcrxg

It is no coincidence that the Sixers finished with the No. 1 seed in the East and was on the verge of sweeping the Wizards out of the postseason. They now lead the series 3-1.

The Wizards took advantage of Embiid’s absence, although they didn’t put the game away until the waning seconds. Bradley Beal had 27 points and Russell Westbrook finished with his 12th career playoff triple-double (19 points, 21 rebounds, 14 assists).

With the score tied 108-108 and a little less than three minutes remaining, the Wizards went with a strategy of fouling Ben Simmons whenever possible. He hit 4 of 8 free throws in the final 2:47 (he was 5 of 11 overall from the free-throw line).

The Sixers can deal with losing Game 4. They would have a harder time with a loss of Embiid.

Sixers center Joel Embiid took a hard fall in the first quarter of Game 4 against the Wizards. His status for Game 5 is unknown. (Photo: Tommy Gilligan, USA TODAY Sports)

The Sixers said precautionary tests will be done Tuesday.

Mike Conley powered his new team down the stretch against his old team, leading the Jazz to the brink of advancing to the second round. With the Jazz clinging to a 110-106 lead with less than four minutes remaining, Conley blocked Ja Morant’s 10-foot driving floater. Then he hit a 3-pointer with 3:24 remaining to give them a 113-106 lead. The Grizzlies never seriously threatened after that. Donovan Mitchell added 30 points and eight assists.

The Nets have little desire to make a return trip to Boston. And it’s more than just because of Kyrie Irving. A Game 5 victory would send the Nets to the semifinals against the No. 3 Milwaukee Bucks, who closed out their series with the Miami Heat on Saturday. Of course, they also could do without the Irving drama. Late in Sunday's game, as Irving was greeting teammates who were headed to the Nets' bench, he stepped out to midcourt, where he took a step on the face of the Celtics' logo. Then as the Celtics were leaving the court after Sunday’s Game 4 win, a fan threw a water bottle at Irving. The Celtics could be short-handed again. Celtics guard Kemba Walker and forward Robert Williams are both listed as doubtful. They both missed Sunday’s Game 4.

Having some consistency helped Devin Booker and the second-seeded Phoenix Suns prepare for what was the biggest game of this best-of-7 series Sunday.

"We've had two days off and we spent both days in the gym just decompressing and having conversations and not taking it too serious," Booker said. "Trying to keep our gym the same as it's been during the regular season and I think that was really important for us. Understand that it's called a series for a reason."

The Suns responded with an 100-92 Game 4 win to not only tie the series, but regain home court advantage. So they're sticking with the same preparation script for Game 5 against the defending NBA champion Los Angeles Lakers.

"We want this to be the most consistent part of our program is our gym," Suns coach Monty Williams said after Monday's practice. "The guys stayed pretty focused. When we went through film and then we walked through some things with them, they got their work in and got out of the gym. It was a good day from that standpoint because we know how badly our guys want it because they've shown a competitive edge and drive all season long.”

It doesn’t seem that long ago that the Clippers' obit was being written. That seemed only right, since they lost the first two games of the series at home. And NBA Twitter was having a field day discussing the Clippers’ demise after the Mavericks opened up a 19-point lead in the first quarter of Game 3. But it’s been a different series since then. The Clippers have staged a takeover, fighting back to win Game 3 and then had a command performance in Game 4. “We responded well, especially coming back from that [30-11 deficit] in Game 3,” Kawhi Leonard said. “The job is not done yet, so we got to keep having that even-keeled mindset and get ready for the next one.” The good news for the Mavericks is that Luka Doncic’s strained neck reportedly has “improved.”