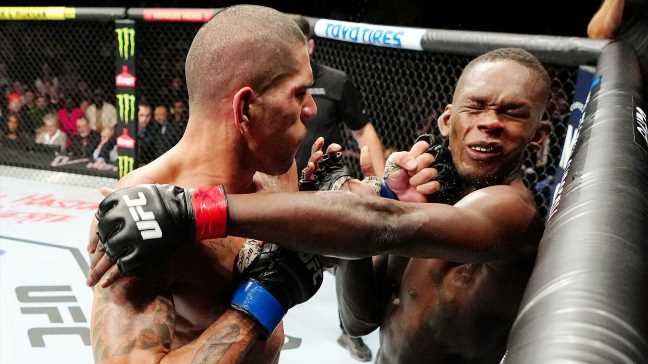 NEW YORK — Alex Pereira had Israel Adesanya’s number in kickboxing. And he has it in MMA, too.

Pereira, the only man to ever knock out Adesanya, stopped him again via TKO at 2 minutes, 1 second of the fifth and final round Saturday night in the main event of UFC 281 at Madison Square Garden. With the victory, Pereira won the UFC middleweight title in just his fourth fight with the promotion. Adesanya was the champion since 2019.

Adesanya had been winning the fight until the final sequence, with Pereira firing a barrage of punches with Adesanya hurt against the cage. Referee Marc Goddard stepped in to stop it after a flurry of left hooks and right hands.

The two fought twice before in kickboxing with Pereira winning both times, the most recent a 2017 knockout of Adesanya.

Coming in, ESPN had Adesanya ranked No. 2 on its pound-for-pound list of best MMA fighters. At middleweight, Adesanya was No. 1 and Pereira was ranked No. 7.

Pereira (7-1) knocked out Sean Strickland in the first round at UFC 276 in July to earn the title shot. The Brazilian slugger has six KO/TKOs in seven career MMA victories and is 4-0 in the UFC. Pereira, 35, is a former Glory Kickboxing middleweight and light heavyweight champion.

Adesanya (23-2) had won three straight fights and was undefeated at middleweight coming into this bout. His only career loss before this was in a light heavyweight title fight last year against Jan Blachowicz. The Nigerian-born New Zealand resident had five successful middleweight title defenses following a win over Whittaker to earn the belt in October 2019. Adesanya, 33, was coming off a unanimous decision win over Jared Cannonier at UFC 276 in July.