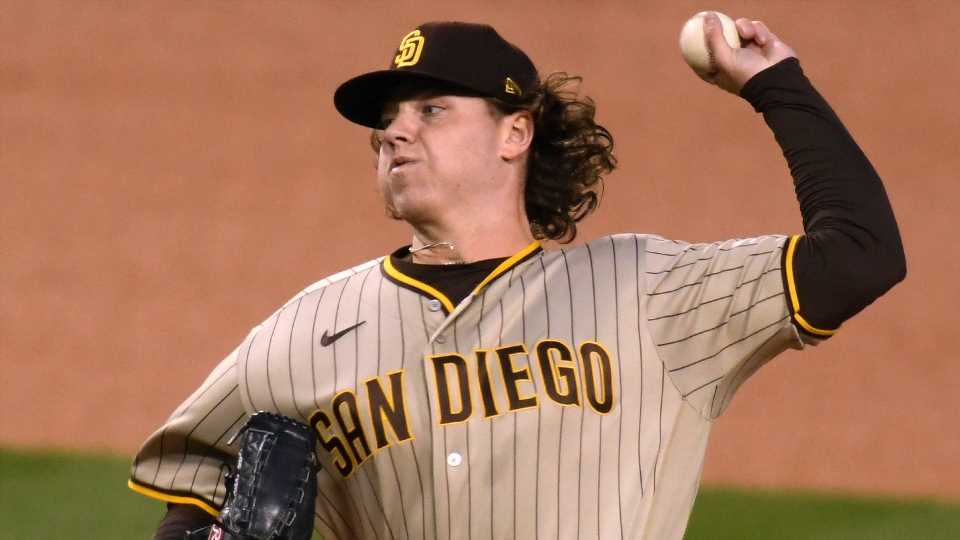 The 21-year-old rookie has been an invaluable piece of the Padres’ pitching staff in 2021, but it’s easy to be overlooked when you’re essentially a pitching swingman on a team with the best record in baseball and an overwhelming amount of star power in the clubhouse. Hell, even prime-years Tony Gwynn might have be a bit overlooked on this squad. It’s not a huge stretch to say that Gwynn never played on a San Diego team with this much raw talent.

But don’t equate Weathers’ relative lack of attention with a relative lack of impact. The lefty has been brilliant in his “whatever you need from me” role. He’s made five relief appearances, three of at least two innings. He’s made five starts, working on lower pitch counts, and he’s been stellar in those, too. Look at these 2021 numbers for the No. 7 overall pick of the 2018 MLB Draft out of Loretto (Tenn) High School.

Weathers’ first two starts of the season were both against the Dodgers, at home on April 16 and at Dodger Stadium on April 22. He threw a total of 9 1/3 innings and allowed just two hits. Brilliant composure to go with his brilliant stuff, and a brilliant pitching education from his father, David, who spent 19 seasons in the bigs. That advice helps.

“Obviously, when you’re facing your rival team you have the potential to just black out. He’d say just stay calm on the mound,” Ryan Weathers said. “You have the ball, control the game. When stuff starts going haywire, everyone’s going to look to you. You’re the one with the ball. Calm down, take it pitch-by-pitch. Big-league hitters are big-league hitters, but they still have to hit it perfectly. Make good pitches, slow the game down, control the game, don’t let whatever’s going on make you speed up and make a bad pitch. Obviously, you’re going to make bad pitches, but you don’t want it to be because you’re speeding yourself up. You want it to be just because you made a bad pitch. Yeah, it’s a rivalry game but it’s just like any other game. Do what you do and stick to your game plan.”

And even though the Dodgers are the current World Series champions, facing them in April still pales in comparison to the first time he faced them. That first meeting was his MLB debut, in Game 1 of the 2020 NL Division Series. Mike Clevinger started for the Padres, but had to leave with an injury before throwing his first pitch of the second inning, which sent the Padres into scramble mode. Pierce Johnson pitched a scoreless second and struck out Mookie Betts to open the third. Then, it was Weathers’ turn.

No big deal, right? Just a 0-0 game to open a playoff series against your team’s biggest rival. Oh, and the first batter he faced was Corey Seager.

“Still to this day, it’s cool, but weird,” Weathers said. “You’ve been working your whole entire life for just a moment in the big leagues, then staying in the big leagues. I remember them calling down before the inning and saying, ‘Hey, get Weathers hot,’ like I’m going in. And in your head, you’re just like, ‘What’s going on? I might be in this ballgame.’ I didn’t really feel my legs running up to the mound. It was like, ‘Oh my gosh, what am I doing out here?’

“I remember seeing Seager step in the box and thinking, ‘Dude, I’m facing Corey Seager. This is awesome.’ Regardless of however old I get, I’m just a fan of baseball, and seeing him step in the box, a guy I’ve played with on video games and now I’m getting to pitch against him in the division series? A lot of fun.”

Seager lined out, then Weathers walked Justin Turner. Max Muncy flied out to end the inning. He walked Enrique Hernandez to open the third, but struck out Cody Bellinger — the 2019 NL MVP — and got A.J. Pollock to pop up. That was it — but 1 1/3 scoreless playoff innings is one heck of a start to a career.

The key then, and now, is keeping it simple.

“Everybody knows the fastball, just kind of move it around, try to change speeds,” Weathers said, giving a self-scouting report. “Three pitches: fastball, changeup and slider. Obviously, every single one’s still a work in progress, try to get something better on it each day. Can’t ever be content. Strike-thrower, going to come after you with all three and gonna make you put the ball in play. Not afraid of contact, not afraid to give up the long ball. If it happens, it happens. Gonna make you put the ball in play. I don’t want to give you a free 90.”

According to StatCast numbers, Weathers has throw 35 changeups so far this season, 144 sliders and 315 fastballs — 258 four-seamers with an average velocity of 94.2 mph and 57 sinkers at 93.9 mph. When his dad pitched, sitting 94 would have been exceptional. It’s a little different now, but the son’s philosophy is the same as his dad’s.

“The thing velocity’s really nice for is if you’re 3-2 and you’ve got to go up the ladder. You have a chance. And you have a little bit more room for error, but with these hitters there really is no room for error,” he said. “It doesn’t matter how hard you throw. Velocity’s nice to have, but if you don’t have location, it’s all out the door. They’re going to make you establish your fastball to both sides, and you’re going to have to land your offspeed in the zone, or you’re not going to get any chases. These hitters are good enough, they can control the strike zone. They know the strike zone, and if you’re not in the strike zone, it’s going to be a long day.”

There have not been many long days for Weathers so far.