But the significance of their standards-busting, series-turning 15-3 victory in Game 3 Wednesday night went far beyond the postseason record 11 runs they scored in the first inning, the five Braves pitchers they gnawed through, or even the feel-good scoreless inning afforded the struggling Kenley Jansen.

Keep in mind: This was a World Series favorite face down and sinking, pondering another winter of what-ifs and second guesses and perhaps even significant changes, should the natives spoiled with a basketball championship across town grow sufficiently disconsolate.

Instead, a team that spent the first two games on its heels came out swinging, ambushing Braves starter Kyle Wright with a flurry of early-count hacks that produced a pair of home runs and drove the 25-year-old from the game after nine batters. They piled on against old teammate Grant Dayton, summoned to triage the wound, only to give up three home runs and eight runs and record just six outs. 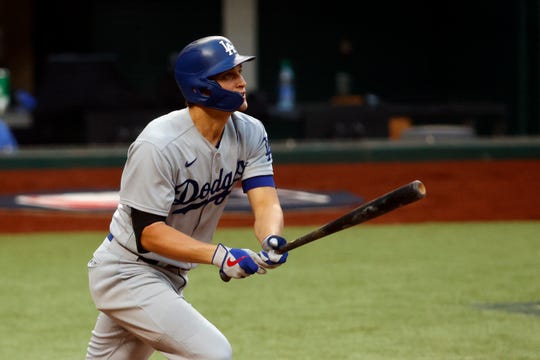 By the third inning, the Dodgers’ 15 runs equaled the record for most in an NLCS game, and by the time they looked up from their five-homer death punch, the series still favored the Braves but suddenly tilted another direction.

Well, in Thursday’s Game 4, the Dodgers trot out Clayton Kershaw, future Hall of Famer, admittedly star-crossed postseason performer, but also a convincing winner in his two playoff outings this season before back spasms delayed his NLCS start.

The Braves? They will counter with Bryse Wilson, who has thrown 42 2/3 innings his entire career, recording a 5.91 ERA. Braves manager Brian Snitker intimated he’d be glad to get five innings out of Wilson, who made strides much of this season at the club’s Alternate Training Site.

Alas, they said the same thing about Wright before recalling him, and he impressed in beating the Miami Marlins in the NL Division Series. But he was no match for a Dodgers offense suddenly awake after posting one run in the first 15 innings of this series.

RANK: Where does the Dodgers' blowout rank in postseason history?

See where this is going?

In Game 5, the Dodgers can look toward Dustin May, their rookie with the 101-mph fastball, to kick off what likely will be an all-hands effort from the staff.

Same for the Braves, only they don’t have May, might have had to cover several innings in Wilson’s start the night before and used four relievers to clean up the Game 3 mess, including possible Game 5 starter Huascar Ynoa, who threw 92 pitches in four innings.

But forget those mound machinations for a minute. The Dodgers offense was expected to be the star of this series, and over two innings spanning two games, it reclaimed center stage.

“We know who we are over here,” said first baseman Max Muncy, whose first-inning grand slam, launched 435 feet into Globe Life Park’s right field seats, capped the epic 11-run first. “We kind of lost our footing those first two games, but tonight we showed what we can do.”

It all started in the seventh inning of Game 2, when Corey Seager snapped a slumbering offense back to life with a three-run homer. In the ninth, they tallied four runs, pushing the tying run to third base in a game they once trailed 7-0.

They lost 8-7, but the unfounded theory that somehow the offensive uprising would carry over to Game 3 actually came through.

Start with Mookie Betts, who grounded the first pitch of the game to third baseman Johan Camargo, busted down the line and appeared to be out by inches.

But Dodgers replay coordinator Chad Chop implored the Dodgers to challenge the call, and it was narrowly overturned.

Seager slashed the next pitch to left center field for an RBI double, and after doddering through the first two games, the Dodgers needed two pitches to take a 1-0 Game 3 lead.

Seager finished Game 2 with that three-run shot and an RBI double; in Game 3, he went RBI double, RBI single and home run, and – why not? – called it a night by the bottom of the fifth.

The Dodgers appeared to dodder in the first two games, running up huge pitch counts against Atlanta starters Max Fried and Ian Anderson, but failing to score a run in 14 of the first 15 innings.

Their early-count aggression was startling in Game 3, even if only partially by design.

“It’s about winning the pitches you should win.”

Almost everybody was a winner Wednesday night.

Joc Pederson banged out four hits, including an opposite-field, three-run homer in that first inning. Cody Bellinger hit another homer and nearly robbed another. Everybody got on base at least once in the first.

Through the havoc, starter Julio Urias tried to stay warm as his mates batted for 32 minutes in the top of the first. He navigated through five innings and a season-high 100 pitches, allowing manager Dave Roberts to test-drive the struggling Kenley Jansen and Pedro Baez, who pitched a clean sixth and seventh, respectively.

As for the Braves? Dayton and Ynoa are likely cooked for a while, but it could have been worse. Shane Greene, who recorded four outs and hadn’t pitched since Oct. 8, was the only reliever of note called upon.

“We lose the game,” Snitker said. “At least we didn’t burn out the bullpen.”

Games 4 and 5 may be a different story, and a club once firmly in the driver’s seat can only hope to hand a series lead back to their ace, Fried, for a possible closeout Game 6.

“Just a fun offensive night for us,” Roberts said, only mildly understated.

His club had already said enough.

Missing out on a title must sting, but Price was right to sit out after Turner COVID mess