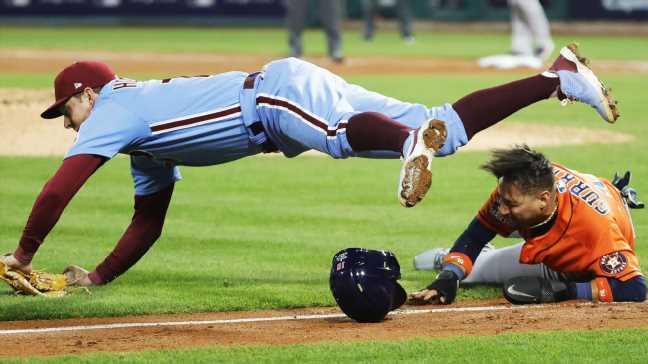 This World Series between the Houston Astros and Philadelphia Phillies might be sitting exactly where we thought it would be at this point with the Astros up 3-2, but how we got here seems to have us all saying, “Wait, did that really happen?” more frequently than usual. As we head into Game 6 in Houston on Saturday, consider what has transpired so far:

Game 1: The Phillies rally from a 5-0 deficit to beat the Astros 6-5 in 10 innings — just the sixth comeback in World Series history by a team trailing by at least five runs.

Game 2: The Astros jump out to a 3-0 lead in the bottom of the first inning off Phillies ace Zack Wheeler, becoming the first team in World Series history to start a game with three straight extra-base hits. They go on to a 5-2 victory.

Game 4: Oh, just this little thing called a no-hitter. OK, a combined no-hitter, so it doesn’t exactly erase Don Larsen and his perfect game from the annals of awesome, but Cristian Javier’s invisiball is spectacularly awesome in his six hitless frames in Houston’s 5-0 victory to even the series.

Game 5: Just a routine 3-2 victory for the Astros that features Justin Verlander’s first win in a World Series game and two terrific defensive plays by the Astros in the eighth and ninth innings, including Chas McCormick’s leaping grab at the wall with one out in the ninth.

The Astros are one win from giving manager Dusty Baker his long-awaited World Series title even though Jose Altuve hasn’t driven in a run the entire postseason and Yordan Alvarez is hitting .105 in the Fall Classic. The Phillies are still alive, even though their presumptive path to success — Aaron Nola and Wheeler dominating the Astros similar to how Stephen Strasburg and Max Scherzer did for the Washington Nationals in 2019 — hasn’t materialized. The Phillies’ top two starters have allowed 13 runs in 13 1/3 innings, but Ranger Suarez tossed five scoreless innings in Game 3 and the bullpen has continued its surprising postseason success.

As we get ready for Game 6, in which the Astros will attempt to become the first team to clinch at home since the Boston Red Sox in 2013, let’s look at six key factors that have shaped this World Series so far — and how they could decide which team will win it all.