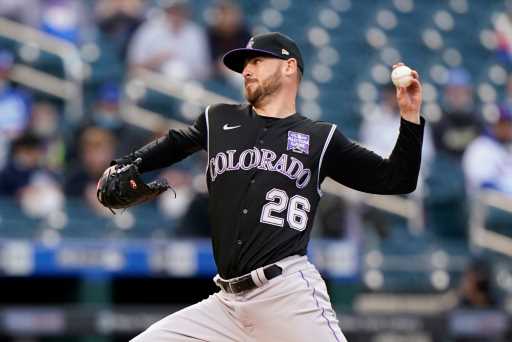 Austin Gomber stood on the top step of the visitor’s dugout at Citi Field, poised to leap over the railing and give Carlos Estevez a bearhug.

The Rockies’ left-hander had done all that he could last Monday night in Queens, pitching eight-plus innings of four-hit baseball against the Mets before faltering in the ninth, ending his quest for his first complete game. When Estevez closed out Colorado’s 3-2 victory, Gomber was on Estevez in a flash.

What the Rockies saw from the 27-year-old Gomber that night was special. It was not just his pitch mix — 38 fastballs, 28 changeups, 23 sliders, and 13 curveballs — that offered promise, but also his intensity, focus and aggressiveness.

Following the game, Gomber exchanged texts with John McCormack, his college coach at Florida Atlantic University. McCormack was thrilled for Gomber, but not surprised at what the Owls’ former ace had done.

“When you have talented players in your program, you get a sense of who can make the big leagues,” McCormack said. “And I always had a sense that Austin would make it. He had that single-minded focus of getting better, working hard.

Any Rockies fan worth their peanuts and Crackerjack knows Gomber was the primary player the Rockies got back in the Feb. 1 trade that sent star third baseman Nolan Arenado (and $51 million) to the St. Louis Cardinals. The deal was widely viewed as a landslide victory for the Cardinals. Gomber is well aware of that, but he’s tried not to let it get into his head.

“I’ve definitely dealt with some of the pressures of the trade, it’s something that will most likely follow me for my whole career, or at least as long as I play in Colorado,” he said. “Nolan was an icon. There’s a good chance that he’s going to end up in Cooperstown one day, and that’s probably not in the cards for me.

But Gomber, who’s still evolving as a pitcher, has cemented himself in the Rockies’ rotation.

“I’m really grateful that I got traded, honestly, because I got a chance to start,” said Gomber, who had been delegated to the bullpen with St. Louis. “This was the best thing for me and my career. I’m thrilled with the opportunity.”

After 10 starts, he was 3-4 with a 4.56 ERA. There have been some ugly moments, to be sure, including his Rockies debut against the Dodgers at Coors Field when he walked seven batters in three innings.

But the left-hander is on a roll. In the five starts leading up to Saturday’s doubleheader, he was is 2-1 with a 2.67 ERA, 32 strikeouts, and just three walks. Gomber’s four-pitch assortment has Colorado manager Bud Black excited about his potential.

“Now it’s about polish and about making the incremental improvements with his pitch command,” Black said. “The ability to command his pitches in and out of the strike zone, consistently, is Austin’s next step. If he does that, he’ll be just fine.”

Actually, Black believes Gomber has a chance to be better than that.

“We’re talking about a lot of different weapons to attack hitters,” Black said. “And the ultimate upside of Austin is the ability to throw any pitch, in any count, in any part of the game. His unpredictability of what he’s going to throw, and being able to throw it for a strike, when he needs to, is a plus.

“And if he’s able to throw just off the strike zone for a chase (pitch), that’s there, too. And if this occurs over the next couple of years, we’re going to have a really fine pitcher.”

Gomber’s signature pitch is his sweeping curveball, which Cardinals pitching coach Mike Maddux helped hone during spring training in 2018. Maddux helped Gomber learn how to make the curve more than just a chase pitch out of the zone.

During a start for Triple-A Memphis in April 2018, Gomber struck out 16 Iowa batters while walking none. Of his 112 pitches, 50 were curveballs, and he threw 40 for strikes.

Any big-league pitcher, of course, must continue honing their craft, but Black said that Gomber’s basic four-pitch mix is already solid, even though it still lacks consistency. But there is another component to Gomber’s game that needs development, too.

“Because when things go bad, sometimes they go bad really fast for me. I need to be able to recognize those times in a game when I need to step off and slow it down a little bit. I need to figure out how to limit the damage.”

A prime example of Gomber’s failure to do that was an April 26 start at San Francisco when the Giants pounded him for nine runs on seven hits and four walks in 1 2/3 innings.

“I see the mental toughness in Austin and I do see him getting his emotions more under control as he pitches more in the big leagues,” Black said. “But being able to do that from first pitch to last, being able to have that focus and that poise, being able to handle a crisis, that’s where we’ve got to get to.”

Gomber, 6-foot-5, 220 pounds, came out of college with a reputation as a strike-thrower, armed with an 88-91 mph fastball that touched 93 on occasion. He had an above-average changeup but lacked a consistent breaking ball, be it a slider or a curve. The lack of a trusty third pitch was a major reason why Gomber wasn’t selected by the Cardinals until the fourth round of the 2014 draft.

According to McCormack, Gomber took it personally. Indeed, Gomber is motivated when others doubt him.

“I know that Austin loved his time with the Cardinals and they had a really tight-knit pitching group,” McCormack said. “But it seemed like he was overlooked when he was there and I think he was ready to strike out on his own and become his own guy. It certainly looks as though he is.”

Four-pitch Mix
Rockies left-hander Austin Gomber has developed four pitches that could make him a staple of the rotation.
* Fastball, 92.3 mph (48.3% usage) — Gomber had doubts his fastball would play in the big leagues, but when he locates it well and mixes it with other pitches, it can be effective.
* Slider, 86.9 mph (20.4%) — He first developed the pitch in college but it was considered a below-average pitch. He fined-tuned it while in the Cardinals organization.
* Curve, 76.9 mph (21.5%) — During spring training 2018, Cardinals pitching coach Mike Maddux taught Gomber how to throw the pitch for strikes, not just as a chase pitch.
* Changeup, 83.2 mph (9.8%) — He paired the changeup with his fastball for an effective one-two punch in college, but Gomber got away from it a bit when he developed his slider and curve. Gomber said his changeup could come back into play more this season.