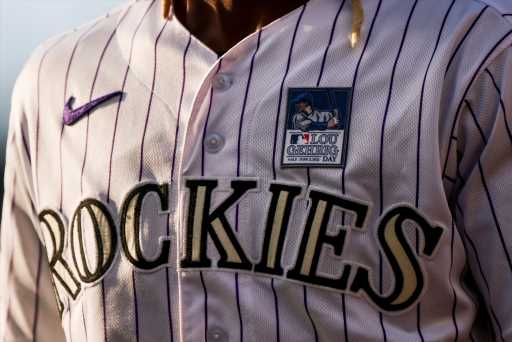 Rockies outfielder Sam Hilliard called it a “holiday of hope.”

Hilliard’s father, Jim, was diagnosed with ALS in early 2018 and now is confined to his electronic wheelchair and is having trouble speaking. His wife, Tamara Hext Hilliard, played a key role in the creation of Lou Gehrig Day. She was an early member of the grassroots LG4Day committee.

“The day had been incredible … everything I thought it would be, except even more,” Tamara said Wednesday from her home in Fort Worth, Texas. “I truly believe that with this huge commitment, and this kind of level and awareness, and with a day set aside every year, this can completely change the trajectory of the disease.”

June 2 was selected because it was the day Gehrig became the Yankees’ regular first baseman in 1925 and began his streak of 2,130 consecutive games played. It also on June 2 that Gehrig died in 1941, about two years after he was diagnosed with ALS.

Wednesday, “4-ALS” logos were displayed in home MLB ballparks in commemoration of Gehrig’s jersey number. All players, managers and coaches also wore a Lou Gehrig Day patch on their uniforms and red “4-ALS” wristbands were worn by the players.

At Coors Field, the Rockies and Rocky Mountain ALS welcomed families affected by the disease to the ballpark. Also, the Rockies and UCHealth honored Bill Martin in a pregame ceremony. Martin was diagnosed with ALS in 2016 and has spent the past five years fighting for himself and others, and has worked as a board member for the Rocky Mountain Chapter of the ALS Association.

According to Tamara, the Rockies were the first major league team to officially sign up to promote Lou Gehrig Day. Jim Kellogg, the club’s vice president of community and retail operations, also was a driving force. Kellogg’s mother died from ALS.

“Jim, and the entire Rockies organization, has been incredible, right from the start,” Tamara said. “To see all of the attention, in the media, on Twitter, everywhere, it’s heartening.”

RyMac honored. Rockies versatile infielder Ryan McMahon, who’s shined at both second base and third, won Sports Info Solution’s award for defensive player of the month for May. McMahon edged San Diego’s Jake Cronenworth by one point. McMahon has saved six runs at second base and three runs at third base. His nine runs saved are tied with three other players and trail only Miami’s Adam Duvall’s 11 for most in the majors.

“All season long, especially last month, some of the plays he’s made at second base have really been brilliant,” Rockies manager Bud Black said.

Story update. Shortstop Trevor, on the injured list because of an inflamed right elbow, continues to make progress and is on track to come off the IL in time for Tuesday’s game at Miami. Wednesday, Story played catch and took batting practice.