This day, it was members of the New York Mets’ turn to apologize Friday for being part of the Astros’ cheating scandal in 2017 and 2018.

Left fielder J.D. Davis apologized for being part of the scheme as a rookie in the morning, and outfielder Jake Marisnick, who was traded to the Mets this winter, will apologize when he speaks this afternoon.

Davis kept emphasizing that he was a rookie that year, simply trying to stay in the big leagues, but conceded that he was embarrassed by the scandal.

“Of course, it’s regrettable," Davis said, flanked by three Mets’ public relations officials. “I feel ashamed to be a part of it. It’s terrible for baseball. …

“Not only do the fans want the game to be fair, but you guys (reporters) want it to be fair as well covering a game where it’s fair to everybody, and again to the peers as well.’’ 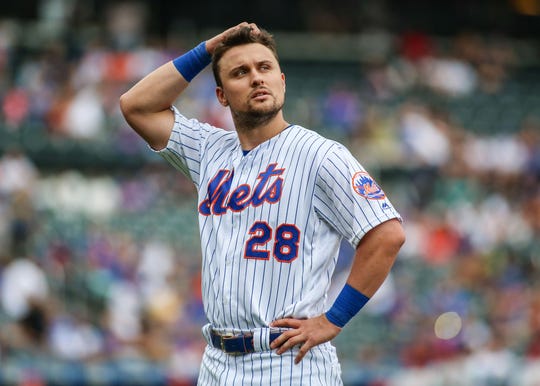 Davis also apologized for lying to reporters earlier in the winter for saying he was unaware of the cheating, saying he spoke “prematurely.’’ Yet, he conceded he later spoke candidly to MLB investigators, confirming that the Astros were using live camera feeds to steal signs, and relay them to the hitters.

He didn’t offer excuses for being part of the cheating, but kept reminding reporters that he was a rookie, playing only 24 games, insinuating that it would have been nearly impossible for him to speak out without being castigated by the veterans.

MARWIN GONZALEZ: 'Wish we could take it back'

He hopes the Astros can do the same themselves, knowing that if they win, they can quiet a whole lot of the distractors. He praised Astros shortstop Carlos Correa, one of his closest friends on the Astros, for saying how remorseful he was for their actions.

“There’s no excuse,’’ Correa said Thursday. “We were wrong for everything we did in 2017. We feel really bad for possibly ruining careers and having that advantage by using technology.

“It was just straight-up wrong. It was bad.’’

Davis says he’ll continue to apologize, too, but as a player who had no impact on their championship season, it’ll be easy for the public to forget he was even part of that team.

The Astros will hardly be afforded any forgiveness.

“It’s terrible for baseball,’’ Davis said. “Baseball took a couple of steps backwards because of these events. Anybody that gets crowned World Series champion, it’s not only a big deal, but it’s a big deal to the baseball world.

“To have the incident is very unfortunate for baseball.’’

Davis won a World Series ring in 2017. He has worn it only a couple of times in his life. He didn’t say whether he’ll wear it again.

He wants to believe the Astros still would have won the World Series without the cheating, but no one will ever know.