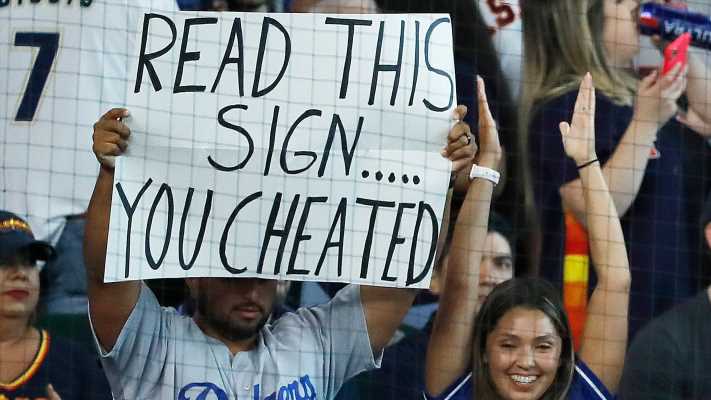 Dodgers fans showed out at Minute Maid Park on Tuesday and brought the ruckus with them.

It was the first game with fans back in the building between Los Angeles and the Houston Astros since Game 5 of the 2017 World Series, a 13-12 walk-off thriller for Houston to give the Astros a 3-2 advantage in a World Series it went on to win in seven games.

With the hindsight of an electronic sign-stealing operation and cheating scandal that rocked Major League Baseball, that game could now be considered the pinnacle of Houston's disobedience.

Thus, Dodgers fans had a right to vent frustrations. They heckled the players on the field. They had chanting matches with the home fans. Some banged on trash cans, a reference to the Astros' cheating methods, on the concourse and others lifted blowup receptacles above their heads.

A Dodgers fans section in Houston started chanting “cheaters” as the Astros took the field vs LA tonight. pic.twitter.com/y3kgfKW9WH

Clayton Kershaw, also the Dodgers' starter in that fateful Game 5, allowed one run — a solo homer to Alex Bregman — over 7 2/3 innings with six strikeouts as the Dodgers cruised to a 9-2 victory.

"It was awesome," Dodgers third baseman Justin Turner said of the capacity crowd. "Some of the guys said tonight it finally felt like we were playing real baseball again. We knew it was going to be loud. We knew there was going to be energy in the building tonight. Our Dodger fans obviously traveled really well."

And the Dodger faithful made sure to wave goodbye to the Astros fans headed to the exits before the final out.

Some Dodgers fans are waving goodbye to Astros fans that are heading for the exits tonight. pic.twitter.com/MrvnChkeiB