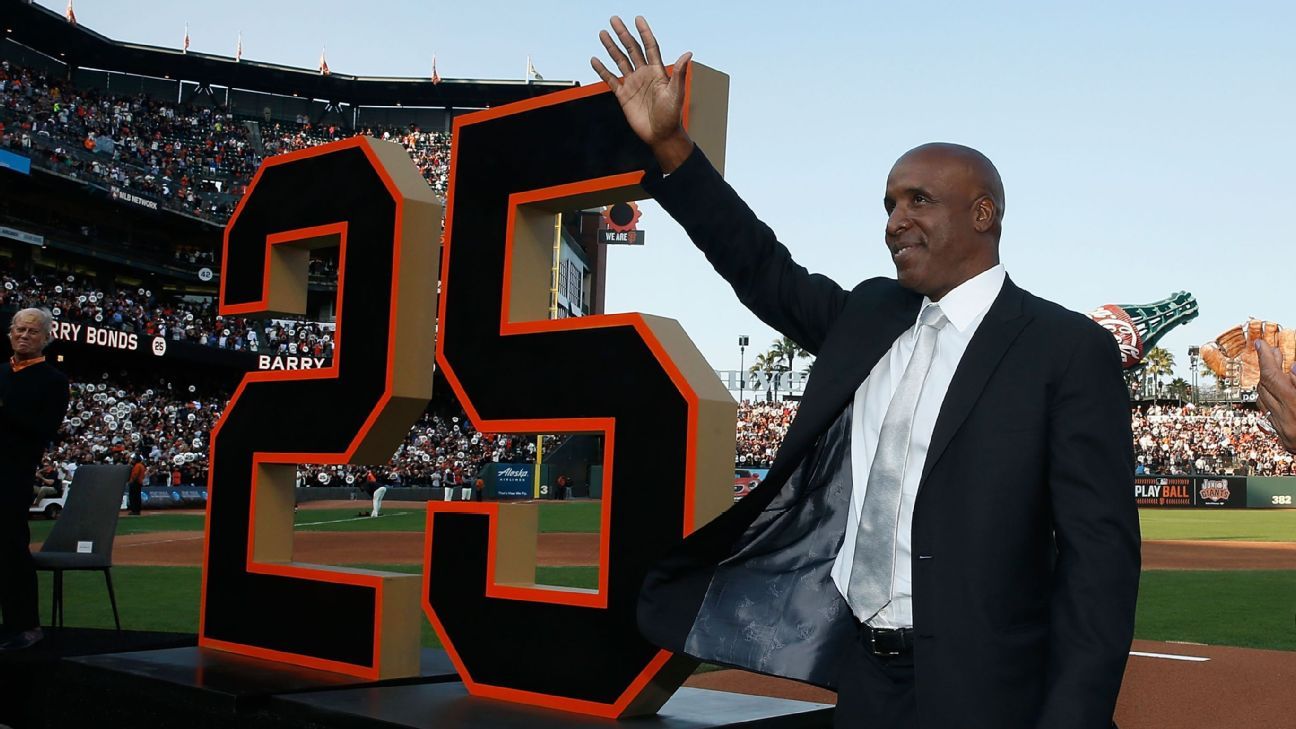 The Hall of Fame released its eight-player Contemporary Baseball Era ballot Monday, and it includes some familiar — and controversial — names: Barry Bonds, Roger Clemens and Curt Schilling. Other players to be considered for the class of 2023 include Albert Belle, Don Mattingly, Fred McGriff, Dale Murphy and Rafael Palmeiro. Notably absent from the ballot: Sammy Sosa.

The 16-person committee, which consists of Hall of Fame players, baseball executives and veteran sportswriters, will vote on the players at the winter meetings on Dec. 4. A player must receive 12 votes to be elected.

Bonds, Clemens, Schilling and Sosa each appeared on the baseball writers’ ballot for the 10th and final time this past election cycle. Needing 75% to get elected, Bonds received 66.0% of the vote, Clemens 65.2%, Schilling 58.6% and Sosa well back at just 18.5%. All four became immediately eligible for the Contemporary Era committee, which considers players who made their greatest contributions from 1980 to the present era but failed to gain election from the Baseball Writers Association of America.

Both Bonds, a seven-time MVP who is the sport’s all-time and single-season home run leader, and seven-time Cy Young winner Clemens received their highest level of support in their final year on the writers’ ballot, climbing from as low as 35% in their initial years on the ballot.

Schilling doesn’t have the same PED allegations as Bonds and Clemens, and his support reached as high as 71.1% in 2021, falling just 16 votes short of election. Schilling then wrote a letter to the Hall of Fame asking to be removed from the ballot in his final year, which the Hall of Fame denied, and his support collapsed. Schilling’s numbers — 216 wins, three 300-strikeout seasons, 80.5 career WAR and an 11-2 record in the postseason with three World Series title — warrant strong consideration for election, but he ostracized himself in retirement with hateful comments toward Muslims, transgender people and journalists.

“I’ll defer to the veterans committee and men whose opinions actually matter and who are in a position to actually judge a player,” Schilling wrote when asked to be removed from the ballot.

Palmeiro is one of just seven players with 3,000 hits and 500 home runs, but unlike Bonds, Clemens and Sosa, he actually received a PED suspension after testing positive in 2005, his final season in the majors. He lasted four years on the BBWAA ballot, getting removed after falling below the 5% vote threshold needed to remain on.

This will be Palmeiro’s first time on a veterans committee ballot — but not so for Murphy and Mattingly. Murphy, a two-time MVP with the Atlanta Braves who peaked at just 23.2% on the BBWAA ballot, appeared on both the 2018 and 2020 Modern Era ballots (as well as earlier incarnations), receiving fewer than seven votes in 2018 from the 16-person committee and three or fewer in 2020. Mattingly, the popular New York Yankees first baseman and 1985 AL MVP, also appeared on both ballots with the same low vote totals.

Depending on how the committee views the transgressions of Bonds, Clemens and Schilling, McGriff may be the player with the best chance of election. A likable five-time All-Star who hit 493 home runs and drove in 1,550 runs, McGriff never received 40% of the vote on the BBWAA ballot, but his 10 years on the ballot came when it was crowded with PED-tarnished players and other strong candidates (writers are allowed to vote for just 10 players), and his borderline case never received much popular support — perhaps in part because he played for six different teams.

Belle was a lethal slugger who once had 50 home runs and 50 doubles in the same season and finished with 381 home runs, but injuries shortened his career to just 12 seasons. He appeared on the 2017 and 2019 Today’s Game ballots and received fewer than five votes both times.

The revamped veterans committee election cycle means the next vote for Contemporary Era ballot wouldn’t come until December 2025 (for election in the class of 2026). Next year’s election will feature Contemporary Era managers, executives and umpires, and then the Classic Era (pre-1980) will be voted on in December 2024.